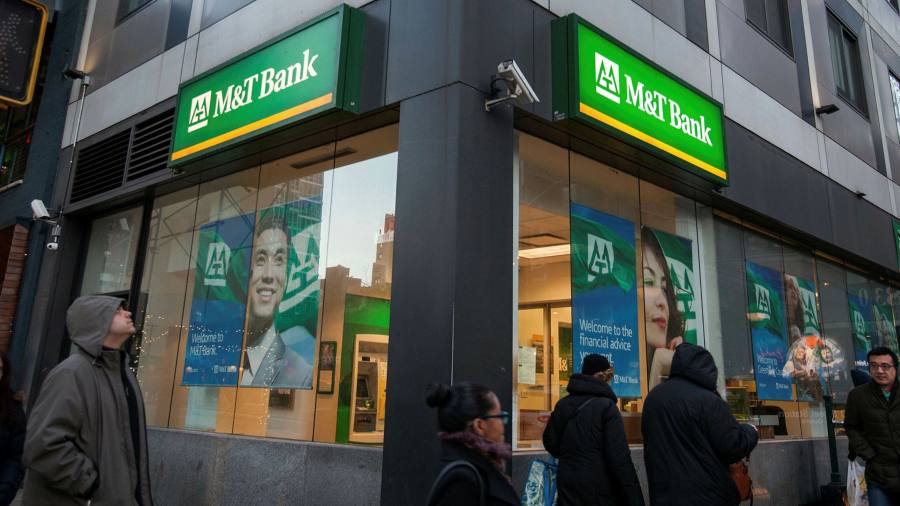 M&T Bank has agreed to acquire smaller rival People’s United Financial for $7.6bn, the latest in a series of regional US banking mergers.

The all-stock deal will create a new bank with combined assets worth about $200bn and a presence across 12 states in the north-east and mid-Atlantic regions.

Regional banks have been on a dealmaking spree in recent years in the hope that becoming bigger will help them boost margins and better compete against giants such as JPMorgan Chase, Bank of America and Citibank.

Pittsburgh-based PNC became the fifth-largest US bank by assets last year after it acquired the American business of Spain’s BBVA for $11.6bn, while a year earlier BB&T bought SunTrust for $28bn to create a dominant bank in the south-east.

“In People’s United, we have found a partner with an equally long history of serving and supporting customers, businesses and communities,” said René Jones, chairman and chief executive of M&T, who will lead the combined company.

Jack Barnes, chairman and chief executive of Bridgeport, Connecticut-headquartered People’s United, will join the board of M&T, which is based in Buffalo, New York, together with four of his bank’s existing directors.

The deal will test the Biden administration’s appetite for bank mergers, as Democrats have in recent years been more reluctant to allow lenders to combine. Antitrust authorities may be more lenient towards a tie-up between M&T and People’s United, however, given their small size relative to other national and regional rivals.

Regional banks struggled when the pandemic hit the US last year, but their stocks have since rebounded to pre-coronavirus highs on the back of strong government support for the broader economy.

The all-share, low-premium deal follows a pattern set by SunTrust — a so-called “merger of equals”.

Brian Foran, bank analyst at Autonomous Research, wrote in a note to clients that the deal gave M&T a “very low-risk franchise that deepens and expands its presence in the north-east”. However, he said that People’s slow growth and its recent announcement of a restructuring raised “question marks [about] whether they saw the writing on the wall and decided to sell instead”.

Once the transaction is complete, M&T shareholders will control about 72 per cent of the combined company.

The banks estimate the transaction will create annual cost synergies of about $330m. It is expected to close in the fourth quarter of 2021.

US tries to soothe French anger over Australian naval pact

Quotas lifted or raised for hunting cougars in Utah