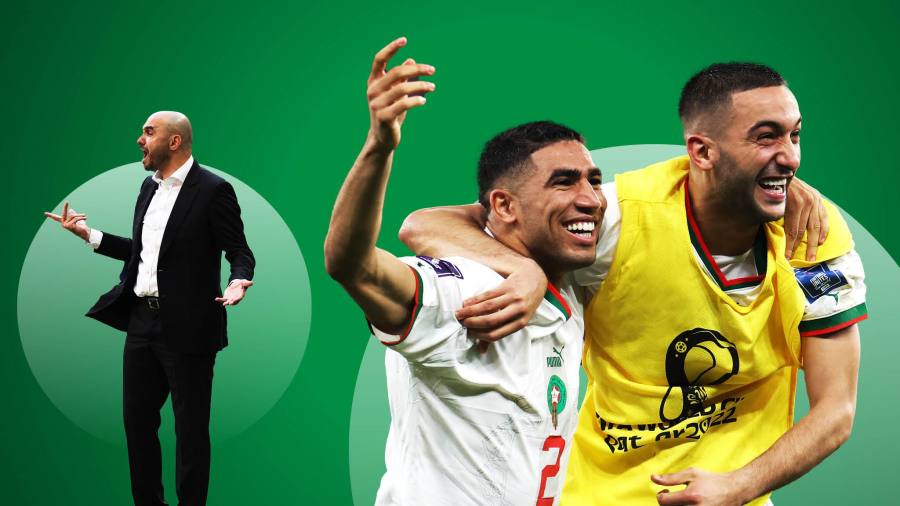 Achraf Hakimi, Morocco’s thrilling right-back who kissed his veiled mother in the stands after victory over Canada, was born and raised in the poor southern suburbs of Madrid. Centre-back Romain Saïss, son of a French mother and Moroccan father, used to wash dishes in his dad’s restaurant in the south of France. Morocco’s star, Hakim Ziyech, learned his football in a new town on reclaimed land in the Netherlands.

At this World Cup in Qatar, a country where 90 per cent of the population are migrants, all borders are blurred and the ultimate example is Morocco. The team that face Spain in Tuesday’s second-round match are the last African side in the competition. They are also the last Arab team, supported by stadiums full of fans from across the Arab world who whistle whenever Morocco’s opponents have the temerity to launch an attack.

And Morocco are a western European team: 14 of their 26 players were born outside the country, the highest proportion for any team in Qatar. The Atlas Lions mix the best of Arab football with the best of the European game.

Morocco’s population is 37mn, but its football team rely disproportionately on the 4.2mn strong diaspora. Western Europe outdoes north Africa for youth coaching, healthcare, nutrition and playing facilities. The paucity of Morocco’s football infrastructure sank its bid to host the 2026 World Cup. And so the Atlas Lions have long had émigré heroes: a former manager discovered the French-raised Moroccan Mustapha Hadji, star of the World Cup 1998, by reading about him in France Football magazine.

In 2014, Morocco’s football federation targeted the European diaspora with a campaign called “Bring back talents belonging to the soil”. Sometimes incentives were offered, writes Dutch historian Gijsbert Oonk: the federation wooed Dutch-Moroccan player Mohamed Ihattaren by paying for his father’s funeral, “including the return of his body to Morocco”.

But Morocco’s campaign also found an emotional resonance in the diaspora. Other African teams — such as Algeria or Senegal — have generally only managed to recruit foreign-born players who were not good enough to play for their European country, usually France. Morocco did better. Ziyech answered a call-up for the Dutch squad in 2015, then quit the camp and unexpectedly opted for Morocco. Had he chosen differently, he would surely be wearing orange in Qatar, as the playmaker the Netherlands now lack. Perhaps European racism — even Dutch-born Moroccans are still habitually called marokkanen — pushes some players to identify with their parents’ country of origin.

Morocco’s previous coach, Vahid Halilhodzic, made the bizarre gamble of fighting his best player, saying: “I don’t select a player who can unbalance the group.” Ziyech refused to play for him. After Halilhodzic was sacked in August, his pragmatic French-Moroccan successor Walid Regragui, who spent his childhood summers visiting family in Morocco, immediately recalled his star.

Given a creative role at outside-right, Ziyech seems to love playing for this team. He is a happy marriage of the north African dribbler tradition and European collectivist football: he can beat defenders, hit 40-yard cross-field passes, and strike crosses that suddenly drop dead at the back post, but he also drags his skinny body back to defend, sometimes with his tongue hanging out in exhaustion. Morocco have made him their designated risk-taker, letting him play his natural game: he attempts a decisive action almost every time he gets the ball. At his club, Chelsea, he has to play it safe when he’s picked at all.

On Morocco’s right flank, Hakimi steamed forward to join Ziyech even when the team were hanging on to their 2-1 lead against Canada. Whereas Halilhodzic prioritised dull defence, this team exudes pleasure. And when defensive organisation is required, midfielder Sofyan Amrabat, a graduate of the Netherlands’ youth teams, takes charge.

Nobody cares that some players speak shaky Arabic. Morocco won two World Cup matches last week, one more than in the previous 36 years. After they beat Belgium, there were small riots in Belgian and Dutch cities, but the vast majority of the diaspora is taking peaceful pleasure, clustering in front of their televisions from Madrid to Frankfurt, hometown of midfielder Abdelhamid Sabiri.

Tuesday’s game will be a festival of multiple belongings, with both teams potentially featuring suburban Madrileño right-backs: the guy who kept Hakimi out of Real Madrid’s first team is Spain’s Dani Carvajal.