Morning Digest: Why this might be the cycle Tim Ryan actually runs statewide 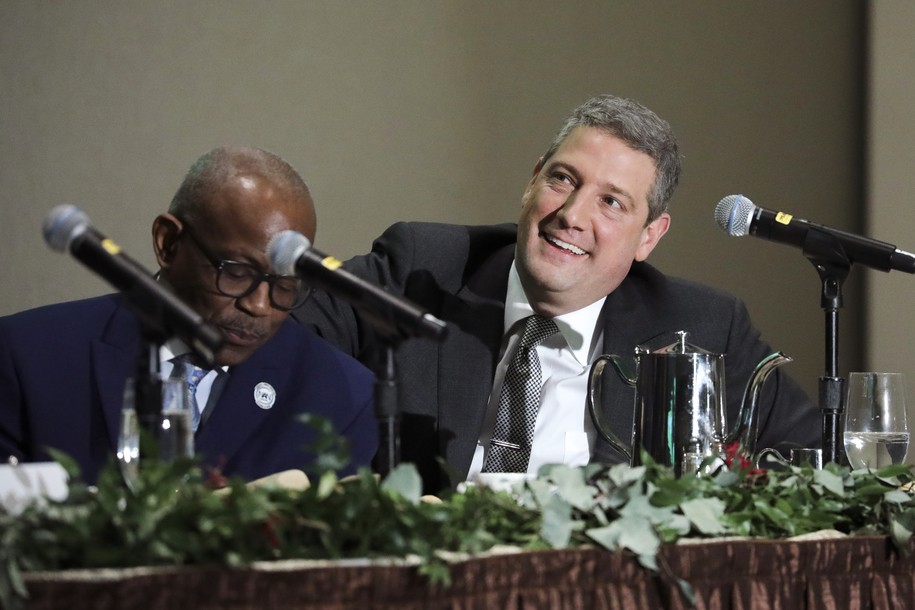 As we at Daily Kos Election always like to remind readers, a politician isn’t running for office until they announce they’re running for office: Until that magic moment, they can always back down. That holds especially true for Ryan, who has a long history of mulling bids for higher office in Ohio but always opting to stay in the House. Indeed, back in 2009, the Washington Post reported that Ryan was about to announce that he’d be joining Democratic Gov. Ted Strickland as his running-mate. That week came and went without such an announcement, though, and Ryan ended up saying the following month that he’d be staying in the House.

However, there’s one big reason to think that Ryan may finally make the jump this time. Ohio Republicans will more or less have free rein to draw the new congressional maps as they please despite the passage in 2018 of a supposedly reform-minded constitutional amendment, and they very well could leave him without a friendly seat to remain in. It will be months before any states can so much as begin the redistricting process, but Ryan may decide that it’s better to go ahead and launch a statewide campaign soon, when he’ll at least know the terrain, rather than wait and hope that he isn’t turfed out of his seat.

Other Democrats have been talking about running for the Senate, but a Ryan campaign could make another race more enticing for at least one of them. Dayton Mayor Nan Whaley has been eyeing runs for the Senate, for governor, or for the House, and the Times reports that “many Ohio Democrats believe she and Mr. Ryan would try to avoid clashing in a primary.”

That doesn’t guarantee that Ryan would avert a competitive nomination race, however. Last week, right after Portman surprised the political world by announcing his departure, Rep. Joyce Beatty did not rule out a bid for the upper chamber.

● NC-Sen: Politico’s James Arkin reports that former state Supreme Court Chief Justice Cheri Beasley, who lost re-election last year by just 401 votes, is “seriously considering” entering the Democratic primary for next year’s open-seat Senate race. Arkin also mentions a couple of other Democratic names that haven’t come up before, state Sen. Sydney Batch and Charlotte Mayor Vi Lyles, as potential candidates, though he adds that unnamed sources say they “expect” state Attorney General Josh Stein to pass on a Senate bid and instead run for governor in 2024, when Gov. Roy Cooper will be term-limited.

● CA-Gov: Former San Diego Mayor Kevin Faulconer formally kicked off his bid for governor on Monday, saying he’d run either in a recall election of Democratic Gov. Gavin Newsom or in 2022, when voters would normally have the chance to pick their governor. Faulconer, a relative moderate, is the second prominent Republican to announce a campaign for a possible recall, following conservative businessman John Cox. Even if a recall does make the ballot, though, initial polling shows it failing: A new survey from UC Berkeley finds voters opposing the idea 45-36.

● MN-Gov: Axios’s Torey Van Oot checks in on a few potential Republican candidates for governor, including Sen. Karin Housley, who was the party’s unsuccessful nominee for Senate in 2018 and now says of a possible gubernatorial bid, “We haven’t completely ruled it out.” Meanwhile, state Senate Majority Leader Paul Gazelka, who was previously reported to be considering, says “Ask me in the summer,” after the legislature adjourns.

Van Oot also talked to state Sen. Tom Bakk, a former Democrat who left the party last year to become an independent (and in so doing, won a prize committee chairmanship from the Republicans who control the Senate). Bakk didn’t quite rule out an independent run for governor but he sounded pretty glum about the idea and even hinted he might not seek re-election.

● FL-05: Florida Politics reported Tuesday that Democratic Rep. Al Lawson was considering a bid against Republican Gov. Ron DeSantis, though the congressman has not yet said anything publicly about his interest yet

Lawson would be the Sunshine State’s first Black governor, but he may have a very tough time getting through the primary, much less prevailing in the general election in this light red state. Successful statewide campaigns in Florida require a massive amount of money, but Lawson is anything but a strong fundraiser. Indeed, we wondered in April of 2019 if Lawson was thinking of retiring after he brought in a mere $25 from donors—and no, we’re not missing any zeroes—during the previous three months.

Lawson decided to seek a third term in this safely blue North Florida seat, but he ended up taking just 56% of the vote in the primary against two unheralded opponents. Needless to say, Lawson would have a difficult time in a statewide nomination contest if a large proportion of Democrats at home are not happy with him.

● LA-02: Democratic state Sen. Troy Carter earned an endorsement this week from the state AFL-CIO for the March 20 all-party primary to succeed former Rep. Cedric Richmond, and he also ended 2020 with a large financial edge over his two main intra-party opponents.

● NY-22: The state court judge overseeing the disputed election in New York’s 22nd Congressional District has ordered a delay in certifying the results so that he can decide whether it’s prudent to allow Congress to seat the current leader, Republican Claudia Tenney, if the appeals courts ultimately conclude that Democrat Anthony Brindisi actually won. Still-preliminary counts have Tenney up 122 votes, but Brindisi is all but certain to press forward with an appeal of any final rulings. He’s also requested a hand audit of all ballots cast, citing the many irregularities uncovered by the court. The parties are due back in court on Friday.

● OH-11: Former Democratic state Sen. Nina Turner has legged out to an early fundraising lead for the likely special election in Ohio’s 11th Congressional District, raising $647,000 in the final three weeks of December and finishing the month with $484,000 on hand. Turner’s rivals have all raised far less or announced campaigns after the start of the new year, meaning they were not obligated to file fourth-quarter reports with the FEC.

● Birmingham, AL Mayor: Former Birmingham Mayor William Bell announced this week that he’d seek a rematch this summer against incumbent Randall Woodfin, a fellow Democrat who unseated him 59-41 in 2017. Woodfin already faces opposition from businessman Chris Woods, who also unsuccessfully ran for this post last time, and Jefferson County Commissioner Lashunda Scales in the Aug. 24 election. A runoff would take place Oct. 5 should no one earn a majority of the vote.

Snipes, who would be the city’s first Black mayor, entered the race with endorsements from quite the mix of fellow Democrats. Snipes has the backing of former Sen. Ben Nelson, who was one of the most conservative members of the party caucus; Kara Eastman, a progressive who was Team Blue’s 2018 and 2020 nominee for the Omaha-based 2nd District, and Ann Ashford, a moderate who lost last year’s primary to Eastman and refused to back her in the general election.

The field already includes two other Democrats: developer RJ Neary and public health official Jasmine Harris, who would also be Omaha’s first Black leader. Campaign finance reports covering 2020 were also released this week, and Stothert ended December with a $660,000 to $317,000 cash-on-hand lead over Neary, with Harris having $19,000 to spend.

The candidate filing deadline is March 8, and all the contenders will face off in the April 6 nonpartisan primary. Omaha, unlike many cities, does not allow candidates to avert a second round of voting by winning a majority in the primary, so a May 11 general election will be taking place between the top-two vote-getters.

Trump rages against outpouring of love for Colin Powell

Neutron stars: A cosmic gold mine