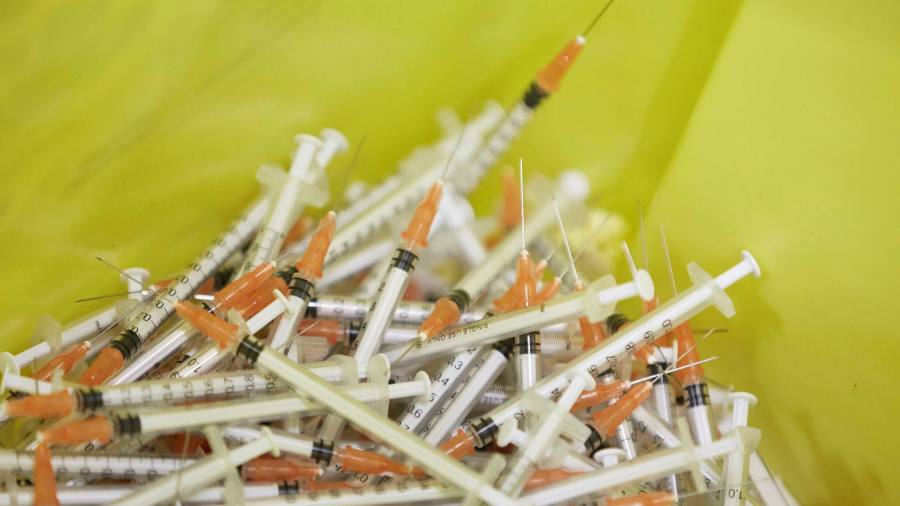 More than 1bn Covid-19 vaccines may have been wasted due to the uneven rollout of jabs worldwide, vaccine hesitancy and storage at incorrect temperatures, according to an analysis by health data group Airfinity.

The analytics company estimates that 1.1bn doses — about 10 per cent of all Covid shots produced — have been wasted since the vaccines were approved in late 2020. Almost 800mn have been wasted in the first six months of this year, according to Airfinity’s estimates, which are based on government expectations, news reports and production forecasts.

Airfinity chief executive Rasmus Bech Hansen said more jabs were likely to be wasted this year, even though vaccine makers plan to scale back production. He said this gives them the opportunity to switch their manufacturing capacity to making vaccines for other conditions.

“A lot of areas don’t have sufficient vaccines. The broader vaccination campaigns could yield better protection and save lives,” he said.

Some wastage is expected with medical products that rapidly expire — and even more in a fast-changing pandemic, where demand is hard to predict. But Airfinity’s lead analyst, Matt Linley, said a significant cause was governments donating doses with short expiry dates to developing countries.

“One of the biggest things being reported is countries getting donations coming too late, too close to expiry, so they don’t have the time to use them,” he said.

Many western countries donated their spare doses after realising they did not have enough demand. When more doses arrived earlier this year, governments in developing countries often faced vaccine hesitancy in their populations.

“If those doses had got to those countries early on, uptake could have potentially been quite a lot higher,” Linley said, explaining that people had often already built natural immunity from infection and were not as interested in being vaccinated.

He added that other problems included doses stored at the wrong temperature, which was particularly important for mRNA vaccines that initially required ultra cold storage, and not being able to extract enough doses from each vial. Larger vials were adopted as a way to distribute vaccines efficiently in the acute phase of the pandemic, but they are being replaced by pre-filled syringes.

Bech Hansen said some of the waste was necessary, because countries over-ordered different technologies to ensure at least one of them worked. “Some stockpiling was needed to protect the world quickly,” he said.