More International Grad Students Wanted to Come to the U.S., but Couldn’t 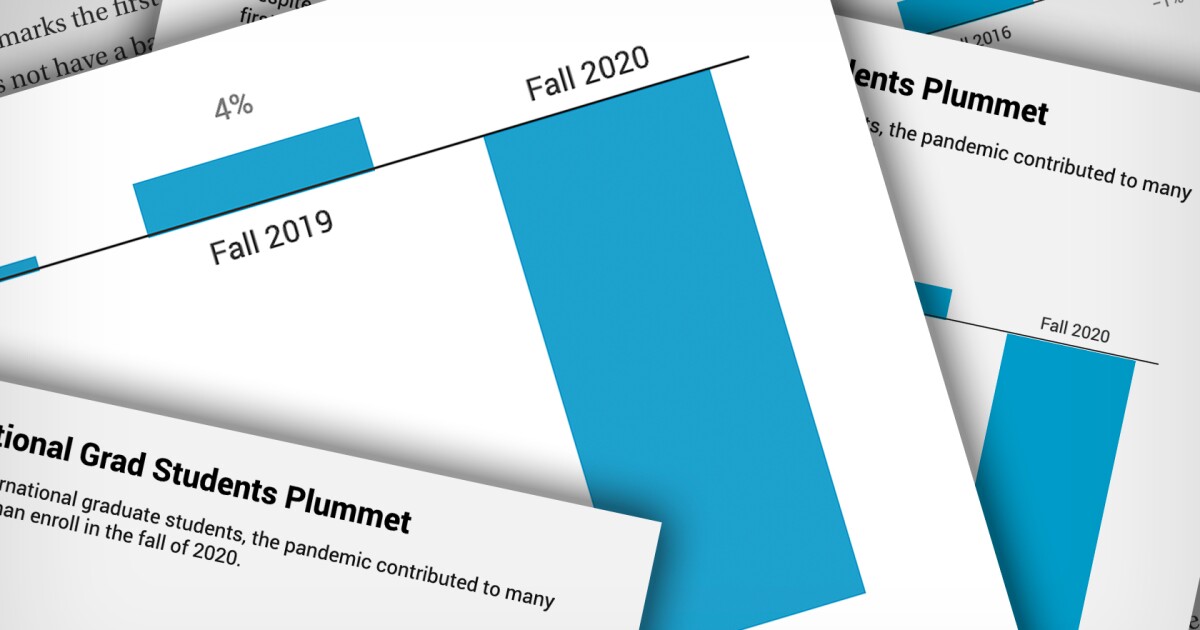 The number of first-time graduate students enrolling in American colleges has plunged during the pandemic, a decline fueled by precipitous drops from the two largest-sending countries, China and India.

New graduate numbers fell by almost 40 percent in the fall of 2020, according to a new survey by the Council of Graduate Schools. Application numbers, however, rose modestly before the Covid-19 outbreak.

While international enrollments are estimated to be down across American higher education, the impact is outsized at the graduate level, where one in five students is from overseas. In certain science and engineering graduate programs, more than half of those who earn degrees are student-visa holders.

By comparison, international students make up 5.5 percent of the overall American college population, according to the Institute of International Education.

First-time enrollments decreased by 26 percent at the doctoral level and 43 percent among master’s-degree students, the new report shows. Because master’s programs are shorter in duration, students may have opted to defer or to reapply next year, rather than spend much of their studies online or in hybrid mode.

Hironao Okahana, vice president for research and knowledge development at the graduate-schools group, which is known as CGS, said doctoral students are more likely to have already been in the United States for a previous academic program and thus did not face the same travel and visa restrictions as students coming from outside of the country. (Students are counted among first-time enrollees when they begin a program at a new academic level.)

About 12 percent of admitted master’s and certificate students and 10 percent of those accepted to doctoral programs deferred admission.

This year marks the first time CGS has collected data on deferrals, Okahana noted, so it does not have a baseline for comparison. But in supplemental surveys conducted by the group, more than 80 percent of colleges reported an increase in graduate-student deferrals. Travel restrictions, by the United States and by students’ home countries, and health concerns were the major causes for deferrals.

China and India, which together account for more than 70 percent of all international graduate applicants offered admission in 2020, experienced especially large falloffs. Chinese enrollments decreased by 37 percent, while the share of incoming Indian students slid by a remarkable 66 percent.

The decline in Indian students may be related to the fact that a disproportionately large share of graduate applicants from that country, 83 percent, are at the master’s level. Twenty-one percent of Indian master’s-degree students deferred, while just 6 percent of accepted Chinese students put their admission on hold.

Application figures hint at the year that could have been, without Covid’s disruption. Overseas applicants to the incoming class of 2020 increased by 3 percent, the same percentage increase as the prior year. Graduate applicants were up 6 percent from China and 5 percent from India.

Before that, overall applications had fallen for two years, a reflection, in part, of the political uncertainty and instability under former President Donald J. Trump.

What to expect for this coming fall is far from clear. The application numbers in the report suggest continued overseas interest in American graduate education. With high deferral rates, graduate programs could see an explosion of pent-up demand.

On the other hand, ongoing travel bans, particularly with China; the slow resumption of U.S. visa processing; and the uncertain rollout of the coronavirus vaccine could again depress international enrollments. The impact of the pandemic on the global economy is an additional wild card.

The graduate-schools report analyzes admissions information collected from 280 institutions. The respondents are disproportionately doctoral universities, which enroll the largest numbers of graduate students.

BEST BOOKS ABOUT TIGERS – Tigers In the Wild