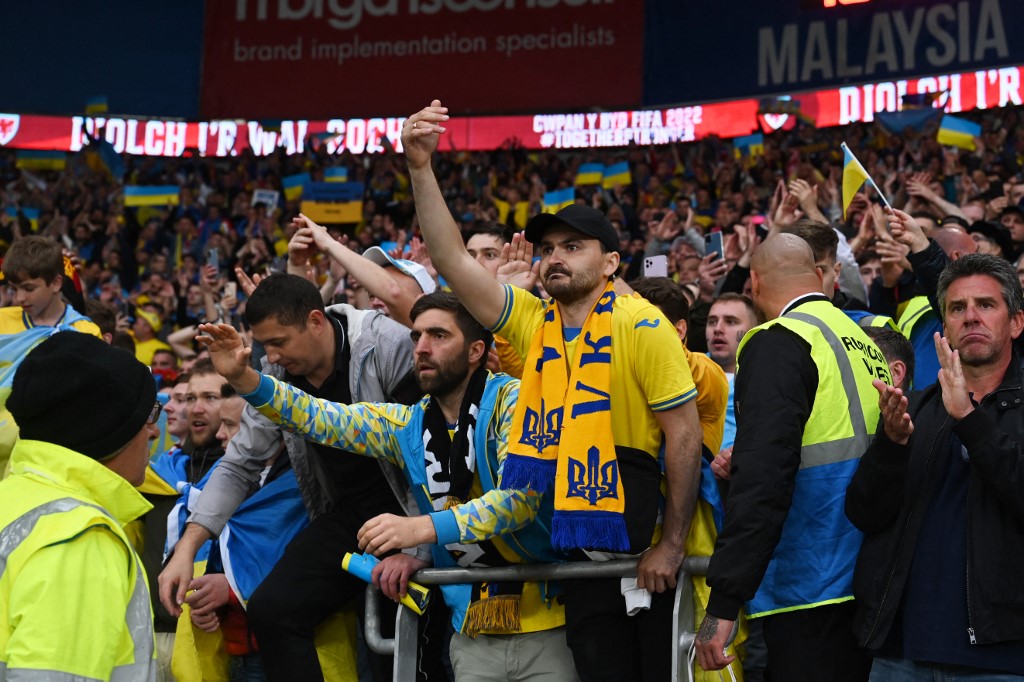 Some 2,300 kilometers from Cardiff, hopeful Ukrainian fans gathered in a Kyiv pub sang the anthem along with the national team ahead of their key encounter against Wales.

But after several anxious missed chances by the Ukraine players, silence greeted the final whistle as Wales’ 1-0 win ended the war-torn nation’s hopes of qualifying for the World Cup.

“(There is) strong disappointment. Many people wanted this victory, this victory was very necessary for the Ukrainian people,” Pavlo, a 32-year-old IT specialist, told AFP minutes after the game ended.

“I think the guys have given their all. (This is) bad luck. The statistics show that the advantage was on our side. But bad luck, it happens.”

Ukraine’s national side made the nation proud in beating Scotland 3-1 on Wednesday in their first competitive clash since Russia’s invasion.

But Gareth Bale’s free-kick during Sunday’s play-off final at Cardiff City Stadium, which was turned into his own net by Ukrainian captain Andriy Yarmolenko, denied Ukraine a place in Qatar.

Dozens of fans packed the basement halls of the Kutovyi (Corner) pub in downtown Kyiv to watch the match on the big screen, hoping for a win which would have taken Ukraine to the World Cup for only the second time since they began playing as an independent nation, in 2006.

Success would have also brought some joy to a nation ravaged by war.

“For each of us, this would be moral support,” Oleksiy Pavlov, a 23-year-old marketer, told AFP while hoping for victory during a break in the match.

“It would be support for those regions that are currently under fire, or for those that are under occupation.”

“Victory would be a boost of morale for our military and for the whole of Ukraine,” another fan, 34-year-old Sergiy Palamarchuk, agreed.

Located close to Kyiv’s Olympiysky stadium, the pub is a favorite spot for fans of Ukrainian giants Dynamo Kyiv.

Four Dynamo players were picked for Ukraine’s starting lineup against Wales but failed to help overcome Bale’s side.

“The guys have left all on the football pitch. Of course, I would like them to beat the Wales team as the Scottish team before, but, unfortunately, this did not happen,” fan Igor Kobzar, 27, told AFP after the whistle was blown.

“Today’s victory would have added a lot of positive energy. But the guys fought, there were many shots, scoring chances, so you can’t blame them for doing something wrong,” said an IT engineer, wearing the yellow jersey of Ukraine’s national team.

“Life goes on. And today we have much more important battles, not on the football pitch, but on the battlefield. Ukraine’s armed forces really set an example of how to fight on your own battlefield.”