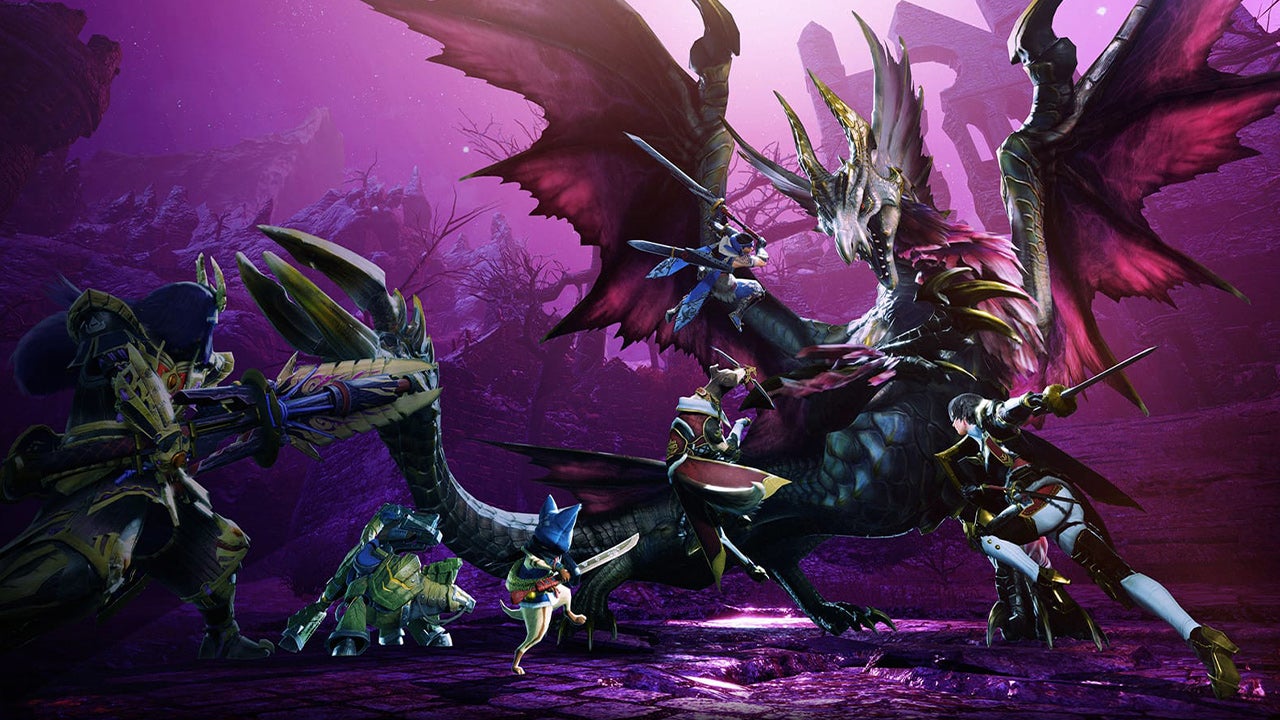 Alright, let’s do this one more time: you are a hunter, and monsters are threatening your adorable little town. You’re given a quest list full of creatures to track down and turn into funny hats, and you’ll do just that until the townsfolk are safe, your build is optimized, and your outfit is as fly as your wirebugs. If you played Monster Hunter World’s Iceborne expansion, or pretty much any of Monster Hunter’s major re-releases before it, then Monster Hunter Rise: Sunbreak is going to be a very familiar Palamute ride through the park. It’s a formulaic DLC full of exciting new foes and a couple cool new locales – and even though it doesn’t really have a ton of interesting surprises of its own, the quality of those additions reinforces just how fun that formula can be.

Sunbreak is essentially structured like a brand new game, introducing the functionally identical hub town of Elgado to operate out of and a fresh storyline to follow there. That story is, once again, a largely ignorable and entirely predictable tale about how something is making the local monsters all hot and bothered, this time set in the European-themed Kingdom rather than the Japanese-inspired Kamura. Its characters are at least slightly more interesting this time around, but plot has never been the draw of Monster Hunter and that certainly doesn’t change here.

What We Said About Monster Hunter Rise

“Monster Hunter Rise mixes classic Monster Hunter ideas with some of World’s best improvements and a whole bunch of clever new mechanics of its own. Not all of them are slam dunks, but they are all fun – and the introduction of Wirebugs and the mobility they bring to every fight is so great I never want to give them up.” – Tom Marks, March 23, 2021

As has become a time-honored tradition, the expansion immediately makes all of your gear irrelevant by introducing Master Rank: a higher tier of hunts full of more difficult versions of the base game’s monsters, as well as an assortment of new and returning monsters to take on. That’s not a complaint, though, as it is legitimately fun to have the bar reset so drastically, with plenty of powerful armor pieces and weapon upgrades to gleefully chase all over again. And while it’s by no means a new trick in Monster Hunter’s bag, one of Master Rank’s greatest strengths has always been that it gives monsters altered behaviors and fresh moves to make them a renewed challenge without just raising their stats.

Both the brand new monsters and the ones returning from previous Monster Hunter games continue Rise’s trend of being as stellar to look at as they are to fight. A new trio referred to as the “Three Lords” are all particularly great: Garangolm’s rocky ape-like appearance disguises its explosive mobility and surprising elemental effects; Lunagaron puts a fun twist on a traditional werewolf theme; and Malzeno’s vampire-inspired moveset genuinely shocked me the first time I saw it blink around the battlefield. Older returning foes like Astalos and Gore Magala fit right in as well, looking better than ever while providing an excitingly fresh challenge for anyone who hasn’t had a chance to face them before.

The new monsters are as stellar to look at as they are to fight.

As for where you’ll do that, Sunbreak adds two new locales: the Jungle, a tropical island originally introduced in Monster Hunter 2 that has been masterfully reimagined thanks to Rise’s seamless 3D maps, and the Citadel, a delightfully eclectic space that can stretch a single hunt from poisoned swamps to snowy peaks to a huge ruined castle. While I liked the Citadel more thematically, the Jungle’s condensed layout makes it Rise’s most convenient map to hunt on yet. It feels as if it learned the valuable lesson that collecting Spiribirds for a stat boost at the start of each quest shouldn’t be such a hassle, giving you a huge patch of them just a Wirebug-ride away from your starting tent. But both locales are quite entertaining to explore in their own ways, packed with even more little secrets waiting to be found.

Speaking of fixing some of the mistakes of Rise, Rampages have been given the boot to an almost comical degree. The Rampage weapon tree is practically the only one that doesn’t get extended with new upgrade options, Rampage quests don’t seem to have been updated in any way, and new weapons scrap the Rampage Skill system entirely in favor of a decoration slot only fillable with special Rampage decorations (which have no connection beyond the name). It’s a stunning reversal, though not an entirely surprising one given how dull the repetitive nature of Rampage quests eventually became.

While I’m not shedding any tears over the abandonment of Rampages, it also stands out that nothing has been introduced to take their place. I was glad Capcom decided to experiment with a new quest type like that, even if its appeal ultimately didn’t last, and the fact that a central feature of Rise has been gutted rather than improved in Sunbreak leaves this expansion feeling far thinner. That’s especially true compared to Iceborne, which introduced clever new ideas of its own to World, most notably the Guiding Lands as an interesting take on its endgame. In contrast, later on Sunbreak just ramps up monster difficulty with a small but amusing twist I can’t spoil – and while that’s certainly kept me happily playing, it doesn’t inspire the same sort of newfound excitement.

It’s odd that Rampages were abandoned instead of improved.

To be clear, there is plenty to do in Sunbreak. After 45+ hours I still have gear I want to chase and optional tasks to complete, but there just aren’t that many fresh ideas to help it stand out as a whole lot more than a bunch of cool new monsters to fight. To that end, nearly every mainline quest sticks to the standard hunt format, with nothing like World’s colossal Zorah Magdaros fights, Iceborne’s Seliana defense against Velkhana, or even Rise’s admittedly one-note Rampages to at least try and shake things up. Again, every single quest I went on was still a ton of fun, but Sunbreak can start feeling pretty familiar by the end.

The one place it does do something truly interesting is in its Follower quests. As you progress up Master Rank, townsfolk in both Elgado and Kamura will ask to accompany you on specific single-player quests as AI-controlled hunters. Doing their quests will unlock those people as options in Support Survey quests (also limited to single-player) where you can pick two as your party members. The hunts themselves aren’t exactly challenging or unique, but the AI is surprisingly sophisticated, using items, mounting monsters, and even placing traps before standing behind them and emoting for you to come and wait with them.

It’s not as robust as a whole single-player campaign or anything, with Follower quests still initially unlocked through multiplayer story progress, but it does make grinding for specific monster parts on your own a lot more fun. The followers you bring along will banter amusingly with each other during a quest, and it was nice to get to know these characters better by actually going out into the field and hunting with them. Followers are so well implemented, in fact, that it’s a bit disappointing you can’t use them to fill empty seats in multiplayer quests as well. It seems like a pointless restriction, especially when a follower can sometimes accompany you into a handful of specific multiplayer Urgent quests.

Apart from the big additions, Sunbreak brings a slew of quality of life improvements. One notably smart tweak to the way you pick your pre-hunt meals lets you alter the effectiveness of each dango ability by changing on the order you select them, adding some neat decision-making to the process. You can now quickly swap between two loadouts of Switch Skills in the middle of a hunt too, massively expanding your potential moveset. Similarly, buddies can be customized more than ever, letting you change out special moves to build the ultimate Palico without having to rely as much on finding your ideal randomized cat. There’s nothing earth-shattering in all these updates, but it’s great that pretty much every system has been touched in some welcome way.

13 Things I Wish I Knew Before (Re)Starting Cyberpunk 2077