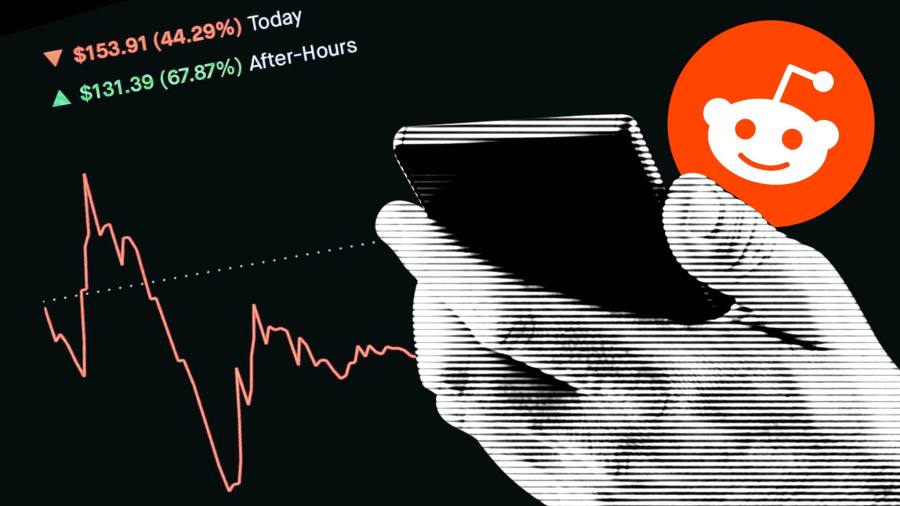 Retail investors who piggybacked on a rally in a clutch of stocks including GameStop are nursing heavy losses as shares have come crashing back to earth.

What began as a planned so-called ‘short squeeze’ on the consoles retailer, orchestrated by traders on the Reddit message board r/WallStreetBets, quickly spiralled into a frenzied rally in a number of shares that stung hedge funds betting on declines. Billionaires such as Chamath Palihapitiya, Mark Cuban and Elon Musk all weighed in on the fervour.

But by the end of Thursday, more than $36bn has been wiped from the valuations of the five main companies whose shares rocketed higher at the end of January. The fallout from one of the wilder trading episodes of the past decade underscores the risks faced by inexperienced traders armed with no-fee trading and slick brokerage apps.

Tori Barry said she used money from her savings to buy shares in GameStop and cinema operator AMC near their peaks, and promptly lost about £2,500. “We are not big players. We haven’t lost millions, but for us that is rent for the month, it is bills. I don’t know how we’ll recover,” she said from Wales.

While it lasted, the rally attracted the attention of high-profile personalities.

Palihapitiya tweeted on January 26 that he had bought “YOLO” call options on GameStop — a bet on rising share prices — after seeing the social media buzz. The next day he tweeted again, “r/wallstreetbets is now the largest hedge fund in the world. Excepts [sic] it’s completely decentralized and entirely democratic”.

A “Gamestonk!!” tweet from Tesla’s Elon Musk on the evening of January 26 linked to the r/WallStreetBets forum, and was liked more than 250,000 times. GameStop shares climbed another 60 per cent in after-hours trading that day.

Cuban on January 28 said “LOVE LOVE what is going on” at r/WallstreetBets, revealing that his 11-year-old son had also made money from a WSB trade. On February 2 the billionaire owner of the Dallas Mavericks basketball team held a Reddit “ask me anything” session where he urged GameStop buyers to hold on to their stock if they were able to, and hailed the site. “Thanks for changing the game. Thanks for taking on Wall Street,” he wrote.

The three did not respond to requests for comment.

GameStop shares have plunged nearly 90 per cent since hitting a peak of $513.12 in pre-market trading on January 28.

“We’ve lost so much money now that the only way to stand a chance of gaining any money back is holding,” Barry said. She is closely tracking the debate on the WSB forum and believes the shares could rise again. “I rate Elon Musk quite highly and trusted him . . . his tweet was a big influence. With his support it appeared that the retail traders would win,” she said.

Even professionals with a background in finance have been caught off-guard. Michael, a corporate accountant who asked that his last name not be used, said he moved his $69,000 Vanguard retirement account into GameStop shares when they fell to $230 per share on Monday. Yet as the shares continued to tumble, he offloaded his holding on Tuesday, crystallising a $42,000 loss.

“I built that . . . balance over a three-and-a-half-year period,” he said. “And in a moment of intense hype, in a moment of weakness for me, I messed it all up in a matter of a day.” The 27-year-old said he believes he can bounce back from this loss by the time he wants to retire. “But I should’ve known better.”

Despite the mounting losses, many r/WallStreetBets users rallied to convince others to hang on to the falling shares — either to make money or to send a message. “This wasn’t about making the wisest move, this was about turning the game on its head, so politely I say fuck that and fuck you,” one WSB user called TheMostBasedMan said on Wednesday in a popular post.

That type of encouragement, common on the forum, has drawn the ire of academics and brokers who are concerned about the lasting financial damage the boom-and-bust in shares of GameStop, AMC and BlackBerry will inflict on trading neophytes.

“They are leading sheep to slaughter,” said Joe Saluzzi, partner at Themis Trading. Prominent personalities like Cuban, Musk and Palihapitiya “are saying hold the line”, he added. “People are believing them. The retail folks don’t understand . . . It is gambling and it is being influenced and encouraged by people that should know better.”

Publicly revelling in dramatic setbacks remains a long-running feature of the irreverent community on r/WallStreetBets, and for the most part this week was no different. Traders shared screenshots of poor investments, eliciting humour and sympathy.

But the conversation has come down to earth. “I respect whoever holds, but I’m out, sorry guys,” wrote one Reddit user on Wednesday.

Where this leaves the retail trading frenzy is unclear. Humans are good at “self-deception” when it comes to both big gains and losses, noted Greg Davies, a behavioural finance specialist at Oxford Risk.

“It’s a feature of every financial catastrophe and bubble since the beginning of time,” he said. “Once we want to believe something will make us rich quick . . . we are very good at filtering out rational information that discounts that.” Times of great upheaval amplify that behaviour, he added. “With all the uncertainty in the world,” Davies said, “the kindling was very dry.