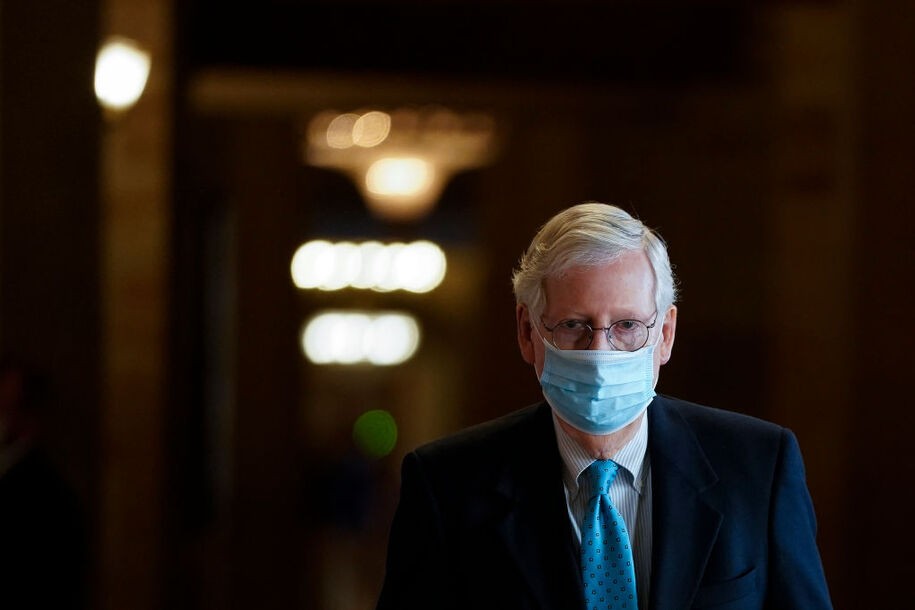 The first dissonant statement that caught my eye came from the braintrust of former McConnell aides who reporters often mine to channel his thinking. Talking to The New York Times about a recent uptick in GOP voters switching party affiliations, McConnell adviser Josh Holmes said the current dynamic “pales in comparison” to the challenges Republicans faced following Barack Obama’s ’08 election, when they “went from absolute irrelevance to a House majority within 18 months.”

“If Republicans can reunite behind basic conservative principles and stand up to the liberal overreach of the Biden administration, things will change a lot quicker than people think,” Holmes offered.

Several things struck me about the framing. The notion of today’s Republican Party uniting behind “conservative principles” is just farcical on its face, particularly after McConnell and other party leaders stood by for four years as Trump morphed the party into a vapid zombie cult. Whatever the GOP is today, it isn’t tethered to anything resembling ideology or a set of guiding principles, conservative of otherwise. Claiming differently is evidence that McConnell and his brain trust have lost track of the nature of the entity they’re trying to steer back into power.

Second, Republicans are counting on Biden’s “liberal overreach” to be a unifying factor for the party. But Biden’s biggest promise and perhaps the most important one in the eyes of most American voters was his pledge to deliver COVID-19 relief and get the pandemic under control. It is the reason he is president, and his relief package is currently wildly popular, including the direct payments and the federal aid to states and cities—provisions GOP lawmakers desperately wanted to cut out. I haven’t seen a single poll where the package or its most prominent elements poll at anything less than two-thirds support, including very solid backing from Republican voters. So whatever Republicans choose to rail against over the next two years (and they will find something), it’s hard to imagine it will prove as winsome as Biden delivering on his pandemic promises—assuming he is able to deliver, of course.

Third, what has also become clear since that Holmes statement is the fact that Senate Republicans are banking on rerunning their 2009-2010 playbook of a total Obama-era blockade to stage a comeback. The problem is they are charging toward 2022 brandishing the battle plan they used in the last war. The strategy telegraphed by Holmes was subsequently echoed by McConnell’s most loyal allies in the Senate as they tried to look beyond the festering McConnell-Trump schism.

“We’ll focus on what the Biden agenda looks like,” Sen. John Cornyn of Texas said this week. “That will create some cohesion among the loyal opposition.”

“Frankly, our party will largely be guided by how we respond to what the Democrats are going to do,” offered Sen. Roy Blunt of Missouri. “One person doesn’t necessarily lead that when you don’t have the White House.”

The idea that McConnell can recreate the monolith of resistance he did during Obama’s presidency in order to rile up a decisive cohort conservative voters has no grounding in reality—not within his caucus and not outside of Washington. In fact, in recent months, McConnell hasn’t even proven capable of leading his caucus through its most critical transition into a post-Trump era.

When it came time for McConnell to rally his caucus in support of congressional certification of the election results, fully eight Senate Republicans defected on the vote—and that was after Trump’s murderous mob stormed the Capitol. Instead of the certification vote reestablishing the bona fides a supposedly sober and disciplined Senate GOP caucus, it became a Trump loyalty test with echoes of the early-stage House Freedom Caucus that today basically runs the GOP in the lower chamber. House Minority Leader Kevin McCarthy is nothing but a lapdog to that caucus now, a takeover that began almost immediately in 2011, after then-Speaker John Boehner reclaimed the gavel from Nancy Pelosi.

Similarly, when it came time to convict Trump on slam-dunk evidence of inciting an insurrection—the best way to exorcise Trump from the party and politics altogether—McConnell bowed to the caucus’ center of gravity rather than led it. The New York Times confirmed as much. Though no GOP senator currently has the political juice to challenge McConnell for his leadership post, “one senator said privately that a challenge could have been incited had Mr. McConnell split with the 42 other Republican senators who voted to acquit Mr. Trump,” according to The Times. Thus, McConnell’s vote to acquit was followed by his scathing rebuke of Trump. McConnell wants to be done with Trump, and the notion that his half-measure was some masterful chess move defies all evidence to the contrary. He has earned the unrelenting ire of Trump and his caucus is in upheaval, riven by the warring factions of old-style McConnell loyalists and newfangled Trump cultists. In fact, people like Sen. Ron Johnson of Wisconsin spent the week telling news outlets that McConnell “needs to be a little careful.” It seems fair to wager that McConnell doesn’t exactly have a grip on his caucus.

Finally, there’s the matter of whether McConnell has a handle on the voters now driving the party. His bet is that there’s enough old-style Republicans who will go to the polls in 2022 with an eye on returning someone like himself to the seat of power. Perhaps the best data points we have on that are the critical statewide elections during Trump’s tenure where he wasn’t on the ballot, since he won’t be on the ballot in 2022. In 2018, for instance, Republicans flipped four Democratic seats, but three of those wins came in what are currently deep-red states: Indiana, Missouri, and North Dakota. With the exception of the GOP’s 10,000-vote squeaker win in Florida, Democrats either held (Ohio, Michigan, Wisconsin, Pennsylvania) or flipped (Arizona, Nevada) all the contests held in swingy states. Despite Senate Republicans’ four pickups in 2018 (a net pickup of two seats), I have long believed that year was oversold as a strong year for the GOP given the favorable tilt of their map that cycle. The only battleground seat Republicans won was in Florida, and it was delivered by a razor-thin margin. So while they consolidated power in red states, they weren’t particularly competitive in traditional battlegrounds throughout the Rust Belt, along with newer swing states like Arizona and Nevada.

In any case, given how dynamic the electorate has proven over the last three election cycles, the Georgia runoffs are likely the best data point we have as a gauge of the post-Trump electorate. And while the state’s wealthiest suburban districts didn’t prove quite as favorable to Democrats as they did when Trump was on the ballot in November, it was the pro-Trump districts that doomed the two Republican incumbents. As a FiveThirtyEight post-election analysis concluded, “the better Trump did in a county in November, the more its turnout tended to drop in the runoffs compared to the general election.” In short, Trump voters just weren’t that into McConnell, even when control of the Senate hung in the balance.

There’s also some evidence that the current defections in Republican voter affiliations are coming as much or even more from the pro-Trump wing of the party as from the GOP old guard. When Gallup recently found Republican dissatisfaction driving up support for a third party to an all-time national high, 41% of that sentiment was driven by Republican/Republican leaners who thought Trump should remain leader of the GOP, while 28% of third-party support came from Republicans/leaners who didn’t want Trump leading the party. I think we still need more data before we have a handle on what exactly is happening with the GOP electorate, but the party has experienced an unusual rate of disaffiliations since the November elections one way or the other.

In total, the picture that emerges is one of an ailing Senate leader charging toward the midterms with a decade-old battle plan, but seemingly oblivious to the fact that neither his caucus nor the voters it supposedly represents are even remotely the same army that went to war with the Obama administration. McConnell will undoubtedly make a play to reunite the caucus and the party behind that plan, but nothing about his plan is grounded in the realities of the battlefield that presently stands before us.