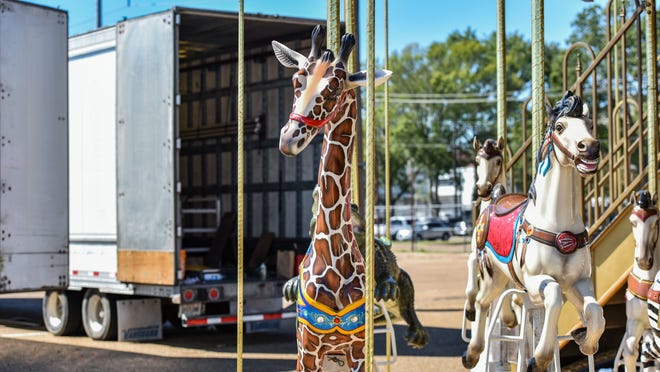 The 163rd Mississippi State Fair officially gets underway with an 11 a.m. Thursday ribbon cutting at the Jefferson Street at Amite Street entrance in Jackson.

Regular admission is $5 with a $5 parking fee. Free admission will be available on weekdays between 11 a.m. and 1 p.m. (excluding Columbus Day, Oct. 10). Children under 6 are also admitted free at all times.

As has become a tradition, the 105-acre campus of the Mississippi Fairgrounds will be transformed into a giant amusement park with fair foods, carnival rides, games, shows, and contests.

There will also be livestock shows, the Zerbini Family Circus, X-Treme Bull Riding, pig races, a petting zoo, rattlesnake show, the Tri-State Rodeo, and the Mississippi Frontier Village, an outdoor area featuring western style vendors, exhibits, and entertainment on the western end of the midway.

The newest attraction for 2022 will be the “Great American Wild West Show,” a live action national touring Western entertainment spectacular located at the Frontier Village.

The show is produced by Don Endsley who hails from Branson, Missouri. Endsley began his career in the 1970s as one of the best known announcers on the Pro rodeo circuit. Since 1996 he and his wife, Sharon, have devoted their lives to making the Great American Wild West Shows more spectacular year after year.

“You have to see it to believe it,” said Mississippi Agriculture Commissioner Andy Gipson.

Live music is also top draw each year at the fair and this year’s lineup includes five nationally recognized artists who will perform on the Budweiser Main Stage:

Local artists including jazz, indie rock, gospel and bluegrass musicians will also perform on the Main Stage throughout the duration of the Fair. Entrance to all concerts is at no additional charge with normal fair admission.

Featured attractions inside the Trade Mart building will include an agriculture expo, food preservation exhibits, an antique car show, arts and crafts exhibits, and more.

And rounding out the attractions will be everything from free biscuits; a pretty cow contest; a horse, mule and pony pull; a fiddle contest; and the chance to have your picture taken in front of Commissioner Gipson’s truck.

With the security and safety of all fairgoers high on everyone’s minds, Gipson has compiled a list of several items to “Know Before You Go” that includes some revised policies for 2022:

Please visit www.msstatefair.com for more information including links to the 2022 “Fun Guide” and scheduled times and dates for all special attractions.