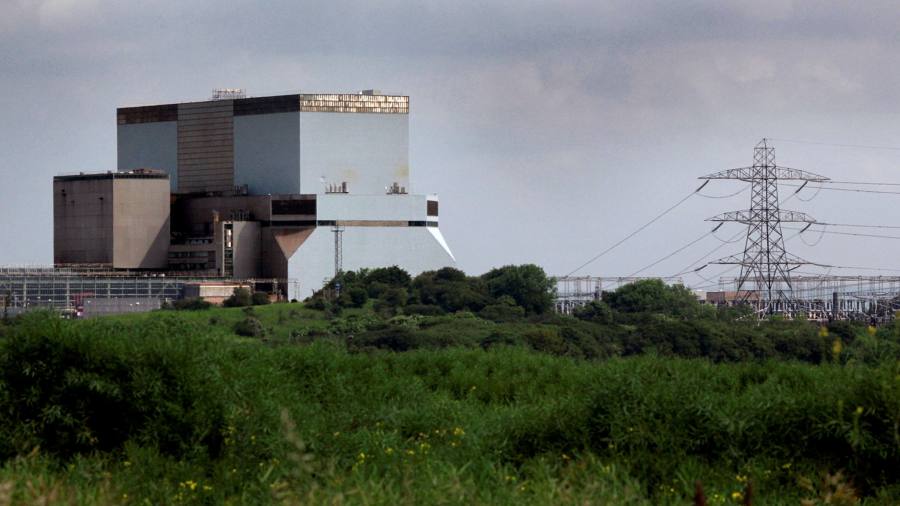 UK ministers have come under attack for taking a “last minute” approach to bolstering domestic energy supplies this winter and avoiding the possibility of blackouts if Russia cuts off gas to Europe.

The pushback came after EDF Energy was forced to put out a memo last week to explain that time had “run out” to delay the closure of one of Britain’s six remaining nuclear power plants at the end of July.

Robert Gross, professor of energy policy at Imperial College London, said there had been a sense of “business as usual” from the government even though the UK relies on fossil fuels for 40 per cent of its electricity generation, predominantly from gas.

Gross was among a group of academics who in December called on the ministers to revisit the UK’s approach to energy security, warning it had been “complacent about the supply of gas for too long”.

Extending the life of the Hinkley Point B plant in Somerset was one of the options ministers were exploring as part of contingency planning for potential energy shortages later this year. Whitehall’s worst-case scenario would leave 6mn homes facing partial blackouts if Moscow stops sending gas to western Europe and Norway, which is Britain biggest supplier of gas, is forced to divert some of its output to other allies.

Other options include keeping three coal-fired power stations open — all but one of those was due to be mothballed by the end of September as part of the UK’s plan to reduce carbon emissions — and belatedly looking to reverse the closure of some of the Britain’s last few gas storage facilities.

Many involved in the energy sector have reacted with dismay that it has taken ministers this long to start making winter contingency plans given it was evident by last September that Russia’s president Vladimir Putin was weaponising his country’s dominance over gas supplies to western Europe.

Sue Ferns, senior deputy general secretary at the trade union Prospect, agreed. “None of this should come as a surprise. Even before the war in Ukraine, there were warnings about [gas] constraints throughout last winter,” she said.

The union had urged the government in April to look into extending the life of Hinkley Point B and other ageing nuclear plants. “You can’t have a lastminute.com energy policy,” she added.

The stringent safety regime and the complexities of inspecting ageing reactors means any attempt to extend their lives requires long lead times. Britain is facing a rapid decline in nuclear generating capacity, which accounts for about 16 per cent of total capacity. All but one of the nuclear power stations is due to retire by the end of the decade and the only new plant under construction — Hinkley Point C — has been hit by numerous delays.

Extending the life of coal-fired plants should be more straightforward but EDF was also forced to warn UK business secretary Kwasi Kwarteng last week that it “urgently” needed a decision on extending the life of its West Burton A coal plant in Nottinghamshire so it would be available this winter.

EDF said West Burton requires essential maintenance and would need to secure new supplies of coal, which it used to source from Russia.

Officials point out the government is also in talks with energy group Centrica over potentially reopening Britain’s biggest gas storage site Rough within months. Rough was effectively closed in 2017 after Centrica deemed it would “not be economic” at the time to refurbish the ageing facility.

But analysts have said the government should also look to resurrect other mothballed gas storage, such as the smaller Hole House facility in Cheshire, to ensure the country has enough to draw on during the cold winter months. That storage facility is being decommissioning by EDF but in a way that “keeps options open”, the company said.

The government came under fire earlier this year for failing to address the short-term problems of high energy prices and a potential supply crunch this winter when it published its security of supply strategy.

Gross argued the government’s short-term planning should include a gas “solidarity plan” with the EU — which has drawn up plans to ration gas — in the event of a total shutdown by Russia and a public information campaign to encourage people to save energy.

Analysts have expressed concern that the government is underplaying the country’s reliance on Russian gas, which it says accounts for less than 4 per cent of supply.

Official data show about 8 per cent of total gas imports in 2021 came from undersea pipelines, or interconnectors, from the EU. But as the bloc relies on Russia for 40 per cent of its own supply there could be knock-on effects on how much gas can be pumped to the UK.

During severe winters the UK’s reliance on piped gas has increased. The so-called Beast from the East storm in 2018 meant Britain received “something like 20 or 25 per cent” of its gas through the interconnectors, according to Niall Trimble, managing director of The Energy Contract Company, a consultancy.

“That’s where the risk lies,” he added. “[If the EU] decide they can’t possibly supply us because they’re short of gas themselves then we go to the back of the queue.”

In previous winters, National Grid has stressed the country can source gas from multiple sources. This includes liquefied natural gas shipped to terminals in Britain from countries including Qatar. But Trimble warned that because of the nature of the LNG markets: “We might get outbid for [LNG cargoes] by . . . the Far East.”

In a statement, the government insisted any extensions to the life of nuclear stations was “entirely a matter for the operator and the independent regulator based on safety considerations”. Privately, officials have sought to play down the warnings of rolling power cuts in Britain this winter, arguing they would only occur in the very worst-case scenario.