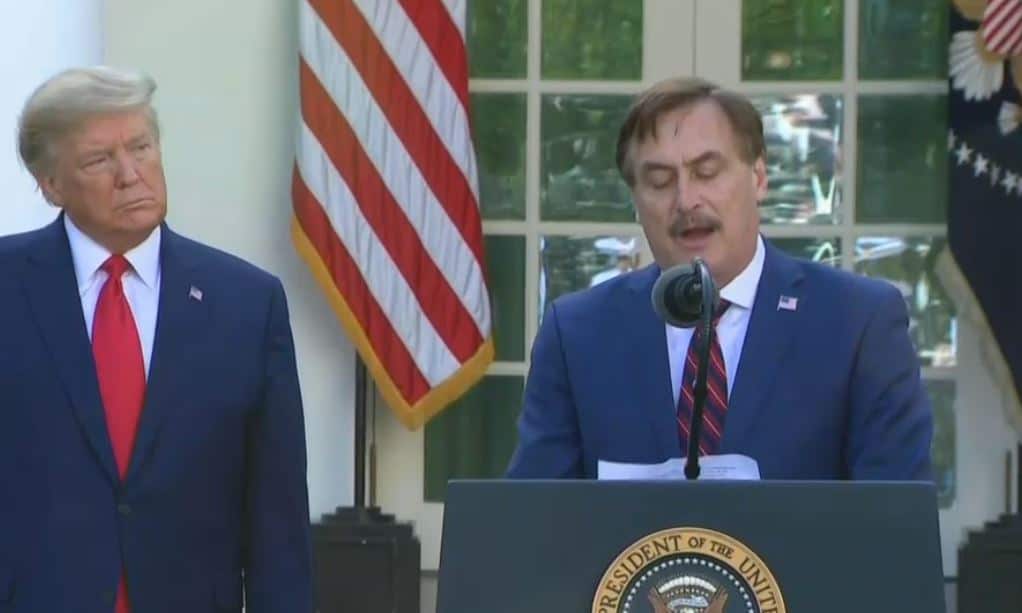 The conservatives on the Supreme Court apparently see Mike Lindell of My Pillow as disposable in Trump’s war on America. He has done his job, and is useless going forward because he’s been outed as a fool and a liar.

Mike Lindell, who once suggested God put Trump in the White House, was turned away by Clarence Thomas’ high court in his appeal over being sued for his relentless lies about Dominions’ voting machines rigging the election and unsubstantiated, fictional claims of election fraud.

“The justices rejected a bid by Lindell and his company My Pillow Inc to immediately appeal a federal judge’s refusal to toss the lawsuit. A lower court also snubbed his effort to quickly review the case, allowing the litigation to proceed,” Reuters explained.

“Sad news for the my pillow guy. There had been some concern SCOTUS might see this case as a vehicle for reconsidering longstanding rules that require a public figure to prove reckless disregard for the truth when suing for defamation,” NBC and MSNBC law analyst Joyce Alene opined on Twitter.

In November of 2021, a mere 20 people showed up to Mike Lindell’s protest of Fox News after it too felt the heat of defaming a corporation. Lindell wanted Fox to push debunked election fraud propaganda that they were already being sued over.

The reverence our culture – and especially conservatives – feel for corporations, combined with corporate power to sue for damages that are respected in this country more than the loss of life women who can’t access an abortion, puts Dominion in a rather unique position as it fights against an avalanche of lies waged against it in an attempt to appease Trump’s fragile ego.

These are not good days to be a Trump election denier — unless one is a Republican running for office on stealing elections for the cause, in which case apparently the Republican Party is all for rejecting democracy and embracing the kind of ignorant, sad, and yet dangerous fascism people like Mike Lindell and Donald Trump represent. It is more accurate to say these are not good days to be a prominent Trump election denier who f*cked around and found out in public. Trump drops his most ardent, feverish cult members as soon as they are not useful to him.

It was mere days ago that a Trump-appointed judge in Minnesota denied Mike Lindell’s demand to have his phone returned.

While Trump appointed judges like special master now-you-see-it-now-you don’t Aileen Cannon are doing their best to quid pro quo the former office holder, many judges prefer to save their own necks first.

The legitimacy crisis at the Supreme Court continues as they return from their long summer break (a concept that is beginning to rankle as Americans struggle while working two jobs that include few to no paid breaks) after stealing rights from a majority of the country with nary a pretense at caring to hear the data and facts.

This court is essentially Clarence Thomas’ court, even though he is not the Chief Justice. “Long considered an outlier on the court’s right flank, Thomas is now the intellectual leader of a conservative transformation that the six Republican-appointed justices are ushering into American law…. Now, as he enters his 32nd term, his critics surely still see him as anachronistic, but he couldn’t be more relevant. Lower courts, elite appellate law firms, and Republican congressional offices are stocked with former Thomas clerks. Under President Donald Trump, no other justice had as many clerks appointed to the federal judiciary or to senior administration positions,” James Romoser wrote yesterday in SCOTUS blog.

Trump gave us Clarence Thomas’s court. A fitting and viral plague of a legacy for two men credibly accused of sexual misconduct, both of whom regard the law as an instrument of power to get their own way.

With Clarence Thomas refusing to recuse himself from cases directly involving his wife Ginni Thomas’ attempts to overthrow the very government Thomas supposedly serves, it is always a moment of celebration when this court takes insipid action to protect its cratering public appeal.

But perhaps it is merely a calculated decision to throw away the used-up props of their activism against democracy while getting praised for not being obvious hacks on every case that comes before them.

Merely tossing Mike Lindell to the consequences of his actions is not going to be enough to save this court. Judicial ethics for the Supreme Court are in need of an overhaul if this court is to regain any credibility, and because absolute power corrupts absolutely, term limits are a must. Clarence Thomas is a walking advertisement for why we once overthrew monarchical rule.

Mike Lindell and many of the worst perpetrators of Trump’s January 6th domestic terrorist attack on our country are learning that while they slavishly served Trump, he and his movement do not care about them one bit.