Middle schoolers are social. What opportunity does that create for learning? 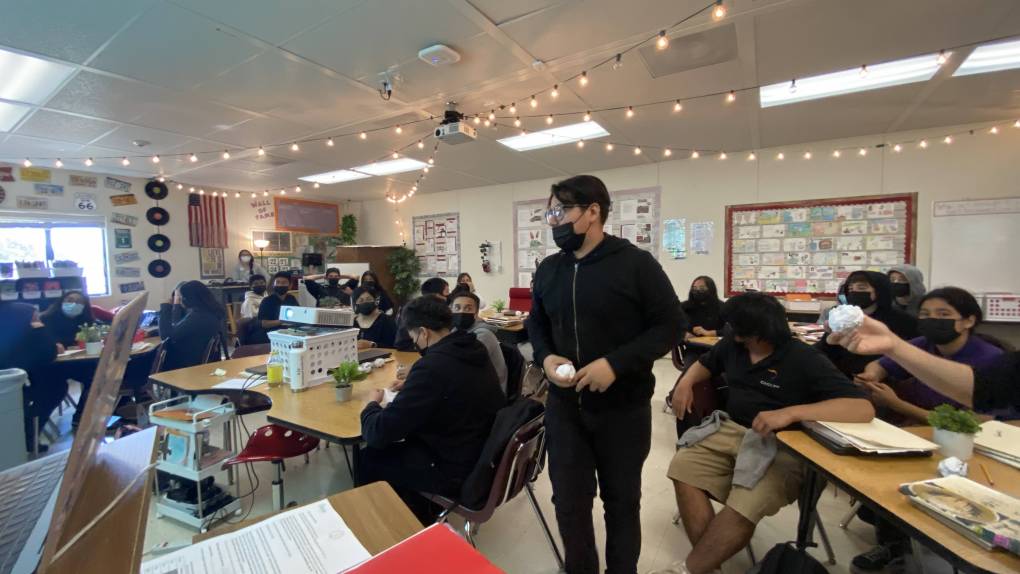 While many passion-igniting endeavors happen outside of the classroom, Dahl said that applications in the classroom can make learning much more exciting and meaningful for tweens whose hunger for relationships can richly influence their learning.

In middle schools, that means the shift in learning after elementary should be about more than having a homeroom and six periods with different subject-matter teachers. The way curriculum is taught must also address the social needs of middle schoolers, according to 8th grade humanities teacher Sarah LeDuff, who was teaching at Downtown College Prep Alum Rock Middle School in San Jose when I visited her class in the spring.

“Their hunger for relationships is not only with each other, but they’re hungry for adult mentorship and adult connections as well,” said LeDuff, who is also a California middle school teacher of the year. “They’re just these vessels of emotion in every way that is beautiful and complicated.”

In order to align curriculum with middle schoolers’ emotional and social needs, LeDuff makes sure her classroom is welcoming in climate, design and instruction. Students enter class to music, like Pharell’s “Just a Cloud Away,” which has lyrics that can create a soundtrack to a kid’s day. The partially lit overhead fluorescent lights in her bungalow are balanced by a string of soft outdoor bulbs. Students sit in pods of four desks – they’re not lined up into rows – and there’s a small potted plant in the middle of each pod.

“Her class is very homey,” said student Brianna Gonzalez. “Once you walk into her room, it’s very relaxed and there are bean bags and couches and everything. It feels like a safe place to be.”

LeDuff wants students to let down their guards in order to let learning in. After remote learning, which was followed by returning back to school buildings, students had a lot of anxiety, which can get in the way of learning. She wanted to make room for well-being, and that included shutting down mistreatment of one another.

“I do want my students to take risks academically, be that working on their public speaking, getting up and performing a poem that they wrote, participating in a debate,” said LeDuff. “These are very vulnerable things. If I don’t make them feel safe out the gates, it’s extremely difficult to tap into any of that creativity they need for authentic learning.”

Students like Ivan Martinez noticed these differences with LeDuff. He said other classes feel “plain” and joyless and that “once you walk in, the vibe is different. It’s like you walk in and you just sit there for more than an hour or just listening to what the teacher is saying.”

One aspect of adolescence is that the call for autonomy gets louder on the part of the child. At home, this might appear as conflict or wanting to be left alone.

“They want freedom,” said Dahl of kids in this period of early adolescence. He said parents can be proactive in how kids get freedom by asking them to demonstrate their good judgment to prove that they’re ready for more independence. And while this transition to greater independence might be confusing for parents who are wondering about their role in their child’s life – especially as friends gain more prominence – Dahl says adults still matter.

“It’s a myth that parents become irrelevant and it’s all about peers,” he said, adding that there’s always room for warm supportive environments with high standards and boundaries. “Combining that with caring that feels like it’s honoring their values and desire to be independent is really, really important. It’s extra important in early adolescence, not less important.”

When it comes to school work, middle school students are expected to be self-sufficient as they receive less adult attention than in their elementary school years as class sizes get larger and students go from class to class with different teachers. But there’s also a way to scaffold the lessons of autonomy for students. For Sarah LeDuff, it comes in the form of teaching students how to self-advocate and self-reflect. And in order to scaffold student autonomy, the curriculum must be designed for those opportunities. One area she changed was how she grades.

“I have really reworked my grading system to value student input so that grades are not just something that happens to you; your teacher is not just your evaluator deciding if you did your work right or did your work wrong, but that grades are something that we co-create together,” LeDuff said. At the end of every quarter, she does self-reflection rubrics with each student and they have teacher-student conferences to discuss priorities like classroom contributions, collaboration or reading skills. One rubric is self-advocacy, so the student will reflect on their own work and grade themselves and present why they feel like they earned that grade – with evidence.

“They will think about things such as, ‘Do they come to me and ask for feedback? Do they ask for help when they need it from both me and their peers?’” said LeDuff. “And they’ll reflect on their ability to do those things and they will give themselves a score.”

LeDuff knows she also has areas of improvement so she’ll survey the class to ask what they think could be improved and then share them back to the students and look for ways to implement those changes.