Mickelson the last to sign up for Saudi-funded golf league 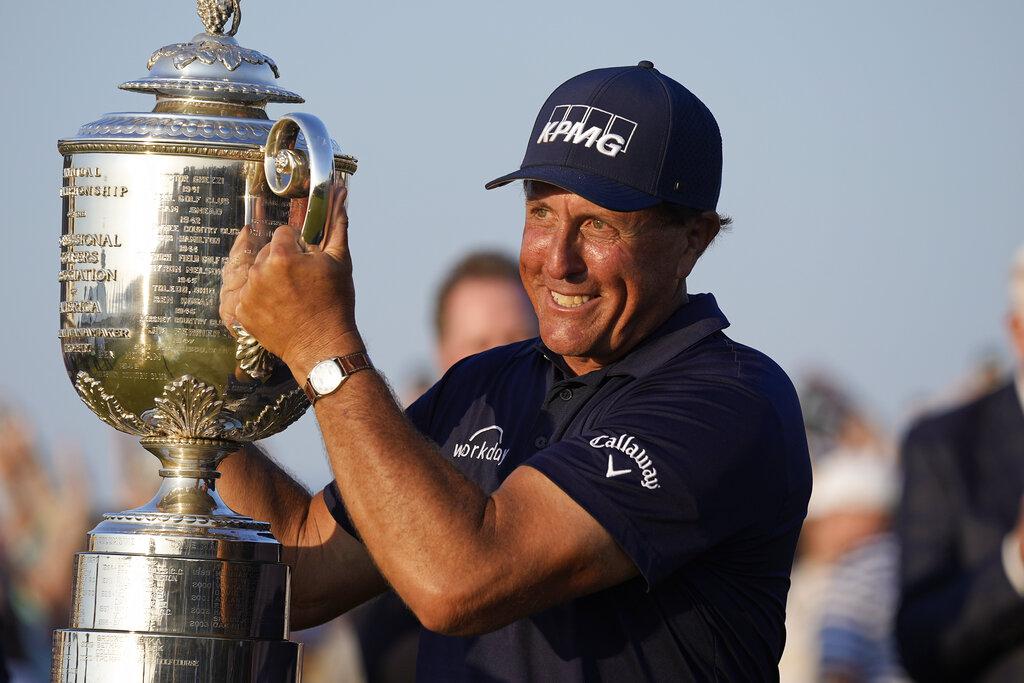 Phil Mickelson holds the Wanamaker Trophy after winning the PGA Championship golf tournament on the Ocean Course, Sunday, May 23, 2021, in Kiawah Island, S.C.

Phil Mickelson, a chief recruiter for a Saudi-funded rival league to the PGA Tour, is ending his four-month hiatus by adding his name to the 48-man field for the LIV Golf Invitational that starts Thursday outside London.

Mickelson will be joining Dustin Johnson, Sergio Garcia and three other former major champions in a 54-hole tournament at Centurion Golf Club with $25 million in prize money and $4 million going to the individual winner.

“I am ready to come back to play the game I love but after 32 years this new path is a fresh start, one that is exciting for me at this stage of my career,” Mickelson said in a statement posted on social media.

Mickelson also said he would be playing the last two majors, starting June 16 in the U.S. Open at The Country Club outside Boston.

He said the “transformative” new league would allow him to focus on a healthier approach to life on and off the course. Mickelson did not mention the signing fee, which is likely to be every bit of the $125 million or more reportedly paid to Johnson.

It will be Mickelson’s first time playing since Feb. 6 at the Saudi International, where he first began to draw attention to how he was leaning when he accused the PGA Tour of “obnoxious greed” in an interview with Golf Digest.

Two weeks later, Alan Shipnuck published excerpts from his unauthorized biography on Mickelson in which the six-time major champion acknowledged Saudi Arabia’s human rights atrocities, including the killing of Washington Post columnist Jamal Khashoggi, but said it was worth getting involved if it meant gaining leverage to make changes on the PGA Tour.

Mickelson also said he and three other top players paid attorneys to write the operating agreement of the new league. He later apologized for what he said were reckless comments, without mentioning the PGA Tour.

But then he was out of view for four months, skipping the Masters and the PGA Championship, which he had won the year before at age 50 to become the oldest major champion in history.

Mickelson apologized again in Monday’s statement, adding that he “empathizes” with those who disagree with his decision to leave the PGA Tour for a league funded primarily by the Public Investment Fund in Saudi Arabia.

“His contributions to the sport and connection to fans around the globe cannot be overstated and we are grateful to have him,” said Greg Norman, the CEO and commissioner of LIV Golf Investments. “He strengthens an exciting field for London where we’re proud to launch a new era for golf.”

The PGA Tour did not grant releases for any of its 14 members who have signed up for the rival series, a list that also includes Louis Oosthuizen, Martin Kaymer and Charl Schwartzel.

Five other players from the Asian Tour were added as exemptions.

Even as Mickelson was the leader in trying to get players to join, his name was left off the original field list that was released on Tuesday. The Daily Telegraph reported Johnson, at No. 15 the highest-ranked player in the world, received upward of $125 million to join.

The decision could mean the end of Mickelson’s career on the PGA Tour because players who defect are likely to face suspensions for violating tour regulations by playing overseas without a release.

Mickelson has 45 career PGA Tour victories and has amassed nearly $100 million in career earnings on the PGA Tour and PGA Tour Champions. He won his first tour event in 1991 when he was an amateur at Arizona State and his most recent title last year at the PGA.

The LIV Golf Invitational is the first of eight such tournaments, with five of them scheduled for the United States, two of them on courses owned by former President Donald Trump.

At least six players in the field already have resigned their PGA Tour memberships. Kevin Na announced his decision on social media. The manager for Garcia, Oosthuizen, Schwartzel and Branden Grace said they have resigned, too.

As much as he was promoting a new concept, Mickelson appeared to be the one who caused the Saudi league to lose momentum with his interviews in February that disparaged the Saudis (“scary mother-(expletives)”) and the PGA Tour (“A dictatorship. They divide and conquer.”)

All the top players — including Johnson — initially pledged their support for the PGA Tour. Johnson later changed his mind.