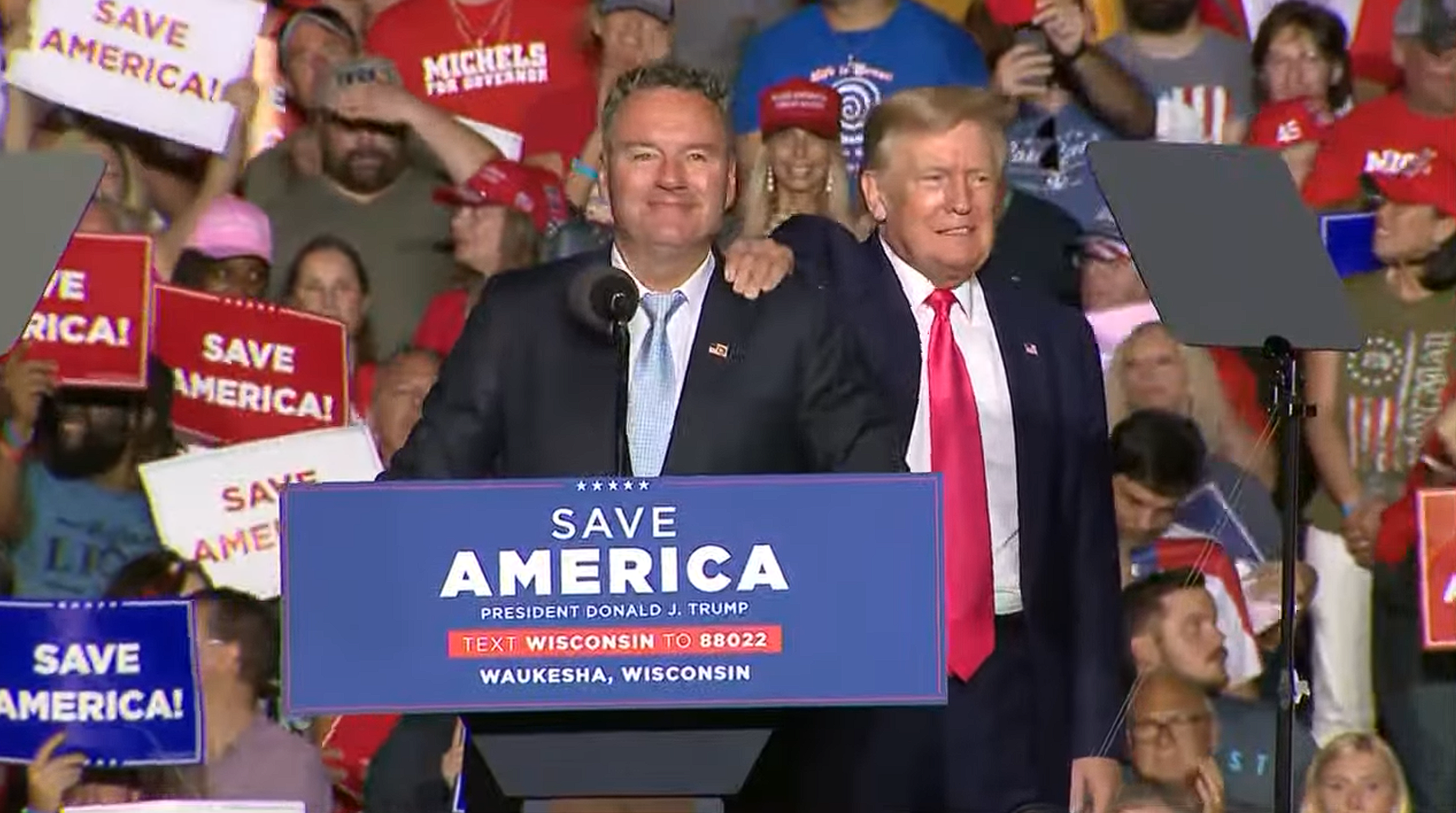 Construction business exec Tim Michels vowed Tuesday night to stand up for the hardworking taxpayers of Wisconsin after he won the GOP nomination for guv and ripped Dem Tony Evers as a failed leader.

Michels thanked former President Trump in his victory speech for his endorsement, calling it a “tremendous validation of our meteoric rise” in the race.

Michels didn’t formally declare in the race until late April after former Lt. Gov. Rebecca Kleefisch had been in the race for months.

Michels said people in Wisconsin feel left behind and vowed to work with Dems such as Milwaukee Mayor Cavalier Johnson and County Exec David Crowley, saying it’s what a leader does to make things better.

But he also vowed to “never compromise my conservative principles” and slammed Dems for ignoring the concerns of everyday Wisconsinites.

“They’ve been left behind by the Democratic Party, which just wants to focus on the social issues,” Michels said.

Michels poured nearly $12 million of his own money into the campaign, accounting for almost everything that he took in during the just more than three months he was in the race. Kleefisch, meanwhile, pulled in about $7.8 million.

Michels used those resources for an early advertising blitz, though Kleefisch and those supporting her narrowed the gap significantly in the closing weeks.

In her concession speech, Kleefisch thanked her supporters for “leaving it all on the field.”

“I urge you all to stay in the fight. The fight now is truly against Tony Evers and the liberals who want to take away our way of life,” Kleefisch said.

Dem Gov. Tony Evers on Twitter said the GOP nominated “the most divisive and extreme candidate as the gubernatorial nominee”

“From voting rights to abortion access and reproductive healthcare, there is so much at stake this November,” Evers wrote.

State Dem Party Chair Ben Wikler quickly slammed Michels as “radical and wrong for Wisconsin.” He knocked Michels for wanting to ban abortion without exceptions for rape and incest and outlawing gay marriage, among other things.

“Wisconsinites have a clear choice in November — a future where extremist policies rule the day, or a future where our state continues to be guided by common-sense leadership,” Wikler said.

In the GOP primary for lieutenant governor, Sen. Roger Roth, of Appleton, came out on top of an eight-person field. Roth had 31 percent of the vote with 79 percent reporting. His nearest GOP competitor, Sen. Patrick Testin, of Stevens Point, had 17.9 percent.

In the Dem primary for lieutenant governor, Rep. Sara Rodriguez, D-Brookfield, won against Peng Her, CEO of the Hmong Institute. Rodriguez had 76 percent of the vote to Her’s 23 percent with 68 percent reporting.