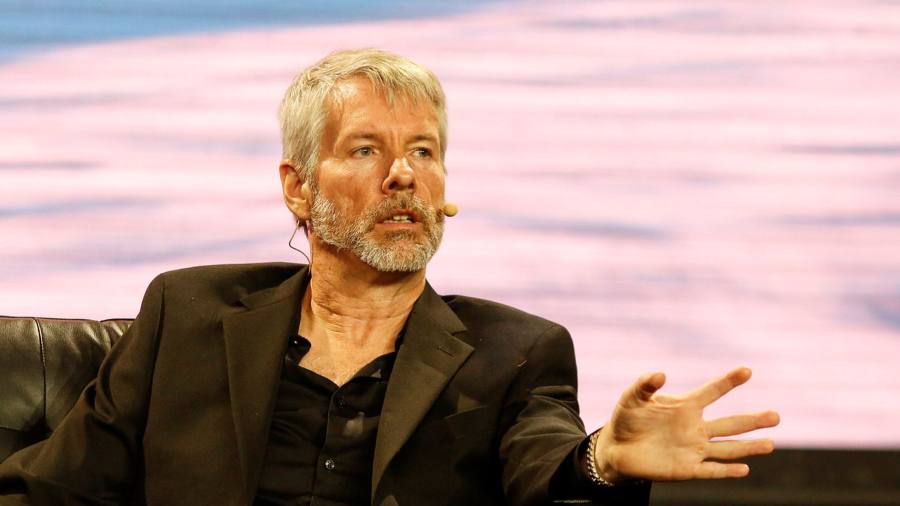 What do you do when you head the public company from outside the financial world with the biggest exposure to bitcoin, and you have just seen nearly $5bn of your notional profits evaporate?

If you are Michael Saylor of US software company MicroStrategy, you sit tight and keep preaching the gospel of crypto.

Saylor did a round of TV interviews this week to insist his faith is unshaken. And, responding to questions over email, he says all good investors, pointing to Warren Buffett and John Bogle, know that you should not worry about short-term market gyrations: “Any time horizon shorter than four years is likely to result in a great deal of frustration & uncertainty,” and 10 years is even better.

“Bitcoin represents the digital transformation of money, property, currency, energy, & matter,” he adds. It “is still at an early stage in its development and poorly understood”.

If the 57-year-old software entrepreneur has managed to project a surprising degree of calm through a slump that has seen bitcoin lose about 70 per cent of its value since its all-time high last November, then it could have something to do with a personal history of market meltdowns even more dramatic than the one that has hit the crypto markets.

For a brief moment in early 2000, MicroStrategy became emblematic of the last great tech boom and bust. Its stock market value leapt as Saylor touted a vision of how the data analytics company’s growth would be supercharged by the internet, before falling back more than 99 per cent in the collapse.

Saylor, who refuses to be drawn now on that experience, saw more than $6bn wiped from his personal wealth in a single day in March 2000 when the company adjusted its accounting and restated two years of revenue. A Securities and Exchange Commission investigation later led to a settlement in which he paid a fine and disgorged $8.3mn in profits, without admitting or denying wrongdoing.

Saylor’s apparent Zen-like indifference in the face of the bitcoin wipeout also points to a rock-solid self-assurance that people who have followed him over the years describe as one of his defining characteristics.

“He’s a visionary — he’s not one that’s worried about going against the grain,” says Dan Ives, a tech analyst who says he has known Saylor for more than 20 years.

Saylor decided in 2020 that the Federal Reserve’s loose-money policies would debase the currency. He felt that the only prudent response was to put his company’s spare cash into bitcoin. He went on to raise about $3.4bn through sales of stock, convertible securities, secured bonds and a secured loan, lifting MicroStrategy’s total purchases to about $4bn at progressively higher prices.

He was not admitting to a shadow of doubt this week about the wisdom of this move. The volatility in the market, he says, is due to crypto’s “crossing the chasm”, as it struggles for establishment legitimacy. There is “a big rationalisation that needs to take place in order for the industry to reach its full potential”.

An Air Force brat who graduated from Massachusetts Institute of Technology with a degree in aeronautics, among other subjects, Saylor had to abandon his ambition to become a pilot for health reasons. He co-founded MicroStrategy with two friends two years after starting out in the computer business, still shy of his 25th birthday.

In recent years, the company has been eclipsed by waves of newer cloud-based software businesses and its revenues have fallen back 15 per cent from the peak hit a decade ago. Yet mature software companies still throw off plenty of cash, and Saylor’s wealth — now put by Forbes at $1.6bn — has financed a life that has long made him an object of fascination for the media in Washington, where MicroStrategy is based. Multiple yachts, lavish parties and a beachfront mansion in Miami all served to keep him in the public eye in the two decades between MicroStrategy’s two entanglements with market mania.

To his fans, Saylor’s splurge on bitcoin shows typical astuteness. “He has proved to be prescient” in warning that inflation would soar, threatening the dollar reserves of American companies, says Mark Palmer at BTIG, one of the few analysts on Wall Street to follow MicroStrategy, which has a market capitalisation of just over $2bn.

Palmer adds that Saylor was also smart to take advantage of the free-money era to raise cash at rock-bottom interest rates, enabling him to buy what amounts to a cheap option on the bitcoin price — though the cryptocurrency has yet to live up to supporters’ claims that it will become the ultimate store of value in inflationary times.

To critics, on the other hand, there is no excusing the bad timing. Saylor pointed out by email that bitcoin is still up 72 per cent since his company’s first purchase, in August 2020. He failed to note that most of MicroStrategy’s purchases came later, and at much higher prices.

“He doubled down at the top of the crypto market,” says Ives. “He bet it all on red at the roulette table. It came up black.”

At least in the short term, Saylor shows every sign of being able to ride out the storm. For a start, he is immune to any backlash from shareholders — despite owning only 20 per cent of MicroStrategy’s shares, he controls 68 per cent of the votes through a special class of stock.

Nor is his company likely to face any immediate financial stress. Bitcoin last week fell through the $21,000 level at which MicroStrategy has to put up extra cryptocurrency as collateral to back a secured loan taken out this year. But about three-quarters of its bitcoin, out of a total hoard now worth $2.7bn, is still available to pledge as collateral, leaving it with a big cushion to back its loan. The first repayments on its debt are not due until 2025.

A prolonged crypto slump, however, would be a problem. The price of bitcoin still needs to rebound nearly 50 per cent just for Saylor’s giant bet to break even. There is still time for another dramatic chapter in MicroStrategy’s volatile history, whichever way things turn out.