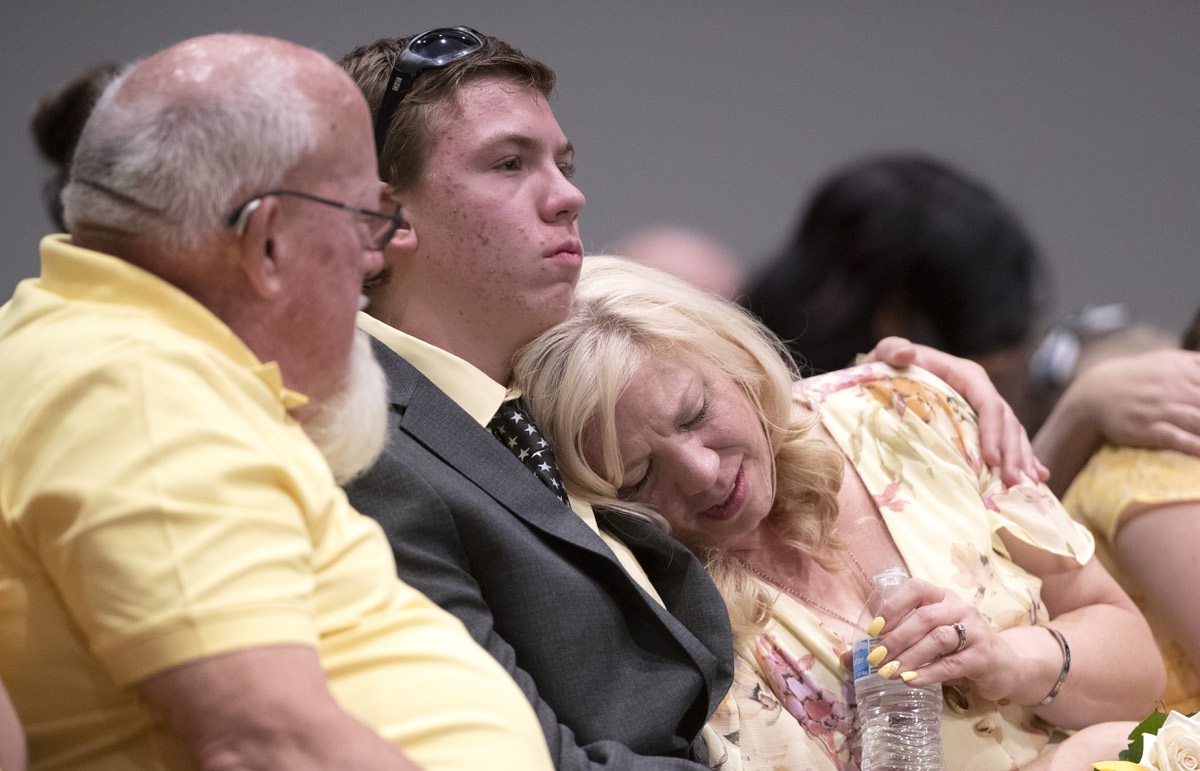 Some called Phil Closi the life of the party. Others said he was brutally honest, almost to a fault.

One of his favorite sayings was that whenever he walked into a room, sunshine was here.

So, it was only fitting that the upwards of 100 visitors who poured into Life Baptist Church in Las Vegas on Saturday wore yellow to celebrate the life of Closi, a 21-year veteran of Metro Police who died Aug. 11, 2021, of COVID-19. He was 48.

Born Sept. 9, 1972, in Mt. Kisco, N.Y., to parents Ellen and Albert — both teachers — Closi acquired a taste for public service early in life.

Closi initially went to school in New York to follow in his parents’ footsteps to become a teacher but moved to Las Vegas in 1996 before finishing his degree to tend to his ailing grandmother who had suffered a stroke.

While briefly returning to New York in 1999, Closi met his wife-to-be, Jenn, through mutual friends who warned she would either love him or hate him right away.

“I loved him instantly,” Jenn said in a pre-recorded message at Saturday’s memorial. The two dated long-distance for nine months before she decided to join him in Vegas, she said.

“He always joked that he couldn’t meet a nice girl in Las Vegas, so he had to import one from New York,” she said.

Also in 1999, Closi attended the firefighter’s academy in Broward County, Fla., and became a certified EMT. Back in Las Vegas he juggled jobs as a medic and a security guard at the Rio before testing into Metro’s police academy in 2000.

There, family and friends said, Closi found his calling. He started out in Metro’s northeast area command, and later worked convention center area command. Closi also found satisfaction in volunteer work and would go into schools across the valley as a D.A.R.E. officer and radKIDS educator.

Colleagues praised Closi as someone who was always in their corner, volunteering to take their place in a work meeting or willing to get coffee or doughnut when nobody else could — so much that Closi was famed for a tactical technique to avoid getting crumbs on his uniform. Phil’s 15-year-old son Jacob even demonstrated the method for Gov. Steve Sisolak, who was one of the attendees at Saturday’s service — leaning forward as if getting ready to fire a handgun, but instead took a bite out of a sprinkled pastry.

Sisolak presented Jenn with a folded American flag, which is usually presented by a member of the police department, but Closi’s death was not considered in the line of duty, Jenn Closi said.

“I just feel it’s a grave injustice,” Sisolak said. “This man put in over 20 years at Metro. Who knows where he contracted COVID. It was a pandemic that the country faced.”

Bart D’Angelo, a retired Metro officer and Closi’s former patrol partner, said while eulogizing Closi that officers find it difficult to separate their work and professional lives. But not Closi.

“When you’re done with a job, leave it. Close the locker,” D’Angelo recalled from a heart-to-heart with Closi, whom he called his best friend. “Go home because you’re no longer a cop. You are, but you’ve got other priorities, your family. Family is No. 1.”

At home, Closi loved spending time with Jacob and his daughter Nicola, 17, who relished all the times she and her dad (who she’d endearingly call Cake Boss) would bake together or spend hours together at nearby butterfly gardens.

“He was the life of the party,” Nicola said in a pre-recorded message. “There wasn’t a day that went by where he didn’t make me laugh.

“He taught me so many life lessons to help me get through this time without him, like how to always laugh every day, no matter how bad it was. … But the most important lesson he taught me was that sometimes life isn’t fair. And that every moment counts, so live life to the fullest. And that’s exactly what he did.” Closi also loved watching Jacob play hockey and would help him practice drills. Jacob was also the apprentice for all Closi’s home improvement projects.

And while Jacob wasn’t always a fan of the fixer-upper work he was sometimes subjected to, it’s the little things that he’ll miss about his dad, he said.

“I never knew before, but his lessons were showing me how to live life. His humor showed me how to cope with circumstances, whether they be good or bad,” Jacob said in a pre-recorded message. “With his tenacity for work, he was telling me in a way to never give up no matter how hard something was.

“Though I miss him dearly, I am forever confident that I will see that big goofy smile waiting for me at those big Pearly Gates. And that we will rejoice again with the savior about how the race was run and the fight is done.”

Closi is also survived by his brother Albert, sister Janine and nephew Christopher.