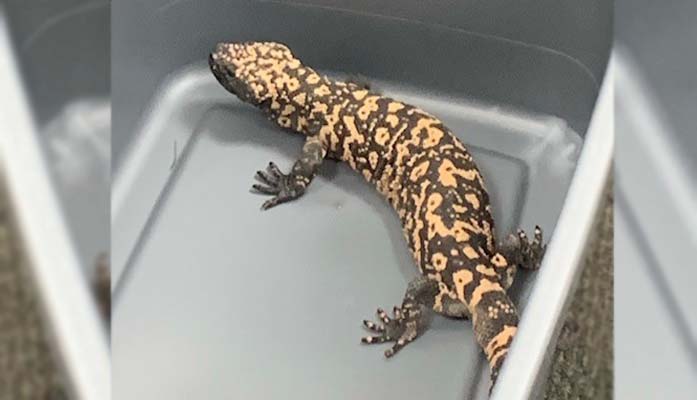 On June 5, 2022, around 11:25 p.m., Mesa Police Officers responded to a convenient store parking lot in the 1100 block of S. Signal Butte for a male subject, later identified as 37-year-old Brandon Denney, sleeping behind the wheel of a running vehicle. The caller described Denney as “nodding off” and said he would mumble and shout.

When officers arrived, they found Denney still sleeping with an orange pill bottle in his hand. Officers woke Denney up and saw that his eyes were red, and pupils constricted. Denney agreed to do field sobriety tests.

While completing the field sobriety tests, officers noticed a Gila Monster poking his head out of a box in Denney’s vehicle. Denney said he had run the Gila Monster over with his vehicle and decided to pick it up after seeing it was injured.

Ultimately, Denney was taken into custody for driving under the influence. During an inventory search of his vehicle, officers found cocaine, methamphetamine, a fentanyl pill, and several items of drug paraphernalia.

Officers also discovered that Denney had three felony warrants for his arrest; two from California, both for Kidnapping with bonds of $1,050,000 and $300,000 and the third warrant was from Nevada for Attempted Grand Larceny of a Motor Vehicle for $50,000.

The Gila Monster was turned over to the Arizona Game and Fish Department. The AZGFD opened their own investigation and will be charging Denney appropriately (it is illegal to own or sell a Gila Monster in Arizona without a permit).

Contrary to Denney’s story, the Gila Monster did not appear to be run over and had no visible injuries.