The Mermaid Capital of Texas Fest Downtown Mermaid Promenade is created to be a celebration of San Marcos’ vibrant artistic and river community. The parade celebrates the history of the Aquamaids from  Aquarena Springs and immortalizes mermaids as guardians of the San Marcos River.

The Downtown Mermaid Promenade begins at 10 a.m. on Saturday and the Mermaid SPLASH Honorees will be honored in an awards ceremony on stage during the Downtown Street Faire at the Historic Hays County Courthouse lawn, following the parade.

Mermaid SPLASH Honorees are comprised of individuals or organizations in recognition of  major and lasting contributions to the Arts, Historic Preservation, Cultural Heritage, and/or  River Guardianship. The Mermaid SPLASH Royal Court includes a Mermaid Queen, King of  SPLASH, a Parade Grand Marshal, and four Honorees comprised of individuals who’s actions and principles reflect those of the Mermaid Society. Each honoree must have performed exemplary service to the promotion, development, and/or contributions to the arts, river guardianship, and heritage of the San Marcos community. This year’s honoree are: 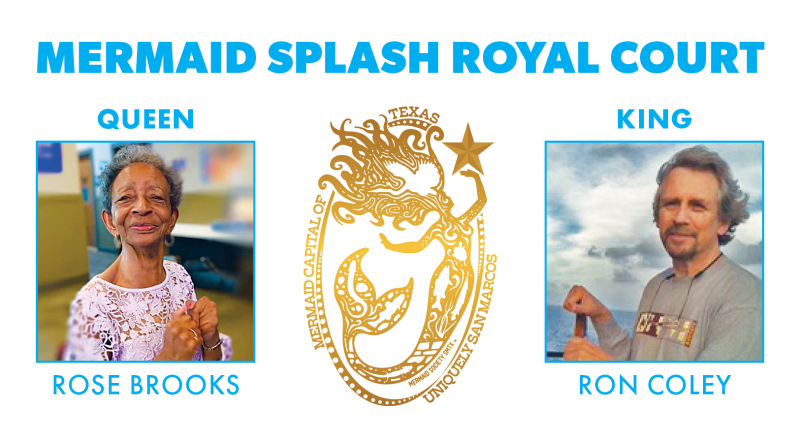 Rose Brooks’ countless good deeds, community service and community activism spans decades. Brooks has said she was inspired by the works of the great Martin Luther King, Jr. Through her years of action, Brooks has worked with Community Action, the NAACP, Women’s Political Caucus, San Marcos CISD Education Foundation, Hays County Democrats, the Juneteenth Charity Foundation and has served as a Precinct Chair and election day poll worker for nearly 50 years. In 1991 she became a charter member of the Omicron XI Chapter of Zeta Phi Beta Sorority which values scholarship, service, sisterhood and finer womanhood.

Brooks, who turned 87 this past August, became a resident of San Marcos in 1941. While still a child, her earliest experiences in San Marcos were shaped by the education she received at the old Dunbar School. Although strictly segregated and known as the Colored Children’s School, offered opportunities were only available in a rural community that required Brooks to walk a daily 12-mile roundtrip walk to school and back. She graduated from San Marcos Colored High School in 1953 and earned a degree from Huston Tillotson College in 1958, a true pioneer at a time when less than 6% of American women graduated from college.

Her father and grandparents encouraged learning and she herself understood its value. “I’m a real advocate of education,” she said. “Regardless of what you do with it, no one can take it away from you once you obtain it.” And looking back over Brooks’ life-long involvement with local volunteer organizations, education — encouraging others to value and pursue education, and supporting their ability to do so — formed the central principle of her past and current community involvement activities.

Among her proudest accomplishments has been her ongoing activity as a founding director of the Garland Warren-Nell Burleson Juneteenth Memorial Scholarship Cake Auction. For more than 40 years, Brooks has helped lead an effort that raises thousands of dollars each year to help local high-school graduates meet expenses that can help them become and remain successful college students.

Brooks has been a pillar and an active member of her Church, Jackson Chapel UMC, for over 60 years. She can be found working in the kitchen, in the dining room and personally delivering dozens of meals to those who are homebound and unable to join in the fellowship of the community meal.

As someone who has taken part in some of the most historic American social and civic movements of the last six decades, Brooks has a tremendous appreciation for history, and firmly believes that we must understand where we have been, if we are to celebrate the accomplishments and recognize the sacrifices of those who have come before. As such, she is a valued and long-time member of The Heritage Association of San Marcos and a member of the Board of Directors of the Calaboose African American Museum. To Brooks, working to assure that history is a living part of our community is an imperative, because history is education.

In a city that has experienced more than its share of nature’s vicissitudes over the years, Brooks has made it a priority to work to work on sometimes pressing, but all-too-often acute, local housing needs, beginning in 1975, and at various times, both as member of the Board of Commissioners of the San Marcos Housing Authority, an officer of the San Marcos Housing Redevelopment Corporation, and as President of the Springtown Villa Apartments.

Her focus on action to help others is anchored in a philosophy of advancing a civic environment that encourages positive change through active, informed citizen participation in the political process — on every level — precinct, school board, city, county, state, and national.

No less significantly, but in different spheres, Brooks has been active in leadership and membership roles on the Parks and Recreation Advisory Board, the United Way of Hays County, and the Bluebonnet Lions Club. She has been recognized in the past as a member of the first class of the San Marcos Women’s Hall of Fame, and San Marcos Civil Rights Trailblazer.

Through all of her volunteer efforts, Brooks was an outstanding, 40-year employee of the Gary Job Corps, where she was a supervisor and served on the Board of Residents. She also takes great and loving pride in her family, including her daughters, her son, her grandchildren, and her great-grandchildren, many still here in San Marcos.

Clearly, Rose Brooks’ volunteer efforts have helped our community become a better place to live. Her values, her example, her energy, her achievement, her spirit of cooperative endeavor, and her seemingly magical ability to stretch a day well beyond its traditional limit of 24 hours, serve to inspire us all. What is unique to her efforts has been the breadth of her activities. As someone who captures and imbues the true expressions of our community’s values and aspirations, the Mermaid Society is pleased to honor Rose Brook as Mermaid Queen for 2021.

Ron Coley will tell you, “I am a gnarly old pirate that lives with a beautiful mermaid. I have been aggressively retired for the past four years.” Beyond that Coley is an award-winning filmmaker and photographer, an innovator of SCUBA equipment, educational leader, highly acclaimed producer, director, writer, cinematographer and underwater photographer. Two things he is most proud of is his 1986 award-winning “River of Innocence” documentary about the San Marcos River which set a new standard for independent productions on the PBS network, and his 20-year tenure overseeing the transition of the Aquarena Springs Amusement Park to a more natural state; protecting critical wildlife habitat, including eight known endangered or threatened species, as identified by the U.S. Fish and Wildlife, and making Spring Lake one of the most biologically diverse aquatic ecosystems in the United States. In 2016, he published an extraordinary coffee table book titled “The fountains of Saint Mark.” Coley has produced many educational videos conveying the lessons of good stewardship and guardianship of the San Marcos River and Edwards Aquifer including “Texas wild and inside the Edwards Aquifer,“ two video exhibits for the Witte Museum (1985, 1989); and A TEXAS TREASURE video for the Edwards Aquifer Authority (1990). His work at the former Aquarena site is most noteworthy; there he designed and build the first public aquarium (1994), created and managed the “Aquarena Center” for environmental education and ‘Diving For Science’ volunteer aquatic restoration program (1996), helped restore the glass bottom boats at the Aquarena Center (2000), built another public aquarium and interactive exhibits at “Spring Lake Hall” (2010), trained student veterans in OPERATION SCUBA an underwater garden (2012). Coley’s incredible knowledge and passion for the Edwards Aquifer, San Marcos Springs and River are unmatched. For these reasons and so more, the Mermaid Society is pleased to honor Ron Coley as King of Splash for 2021.

Renowned local artist and hometown hero, Rene Perez was selected for being a local  ambassador for San Marcos arts and culture. His hard work and talent have started to garner  him attention outside of San Marcos, making him a bit of a cultural attaché for our unique  community. Perez’s recent work includes repainting the murals at Children’s Park, promoting  Downtown with his art selected for the city’s street banners, the La Victoria mural restoration,  Historical First Baptist Church “Love your neighbor as Yourself” mural, the Bobcat butterfly in the agricultural garden at Texas State University, illustrating his first children’s book about archaeology through Texas State, countless paintings and commissioned works that reflect San Marcos’ unique culture and documenting the river through his extraordinary photographs of aquatic landscapes and native creatures. For more information about Perez, visit https://www.jreneperez.com.

Barry Brittan was selected as this year’s parade Grand Marshal because of his community spirit and service as the volunteer Director of Summer In The Park beginning in 2012. “Arlis Hiebert recruited me, because he wanted to step down as Director after 13 years. Since that time I have tried to provide the planning and execution to provide a quality, family friendly series of  diverse musical acts for the citizens of San Marcos.” A summertime staple and tradition for locals since 1987, San Marcos residents and visitors have enjoyed the family-friendly music concert every Thursday evening during the summer months. Thanks in most part to Brittan, Summer In The Park has achieved a highly respected reputation among musicians and fans. Thank you for the music!.

Joshua Sarkardehi is a prominent member of The Eyes of the San Marcos River, a grassroots-driven  volunteer group that thrives on community members who love and respect the river. The mermaid is a symbol of the people that do good work. Guardians like Sarkardehi and others selflessly donate hundreds of volunteer hours to protect the vital and endangered ecosystem of  the San Marcos River. His most recent trash clean-ups took out over 500 mesh bags this summer. The Stairtown bridge clean ups removed a couple thousand pounds of trash over the  span of three clean up events. The Mermaid Society thanks Sarkardehi and all of San Marcos’ river guardians.

When she came to college in San Marcos 35 years ago her love of history took new roots. After receiving her degree in Anthropology from SWTSU, Tudor explored the fascinating history of this area and enjoyed stopping at garage sales to snatch up vintage photo albums. One album she collected in the 90’s eventually allowed her to collaborate with Texas State University and the Brown Family to create an extensive online exhibit. Tudor’s dive into local history through the Brown Collection resulted in numerous contributions to two local public collections;  including the Texas State University Archives and the San Marcos Public Library’s online photo archives. Much of the information collected through her own research is shared daily on her  Facebook page, “San Marcos Texas Historic Photographs,” which Tudor began in April of  2020. Since that time the page has gained thousands of followers became one of the largest single  collections of vintage photographs of San Marcos available online. Tudor says “the true value  of this page is the growing interactive contributions of photographs and oral histories coming directly from individual followers of the page.”

U.S. consumers gear up to hit the road and foreign destinations By Reuters