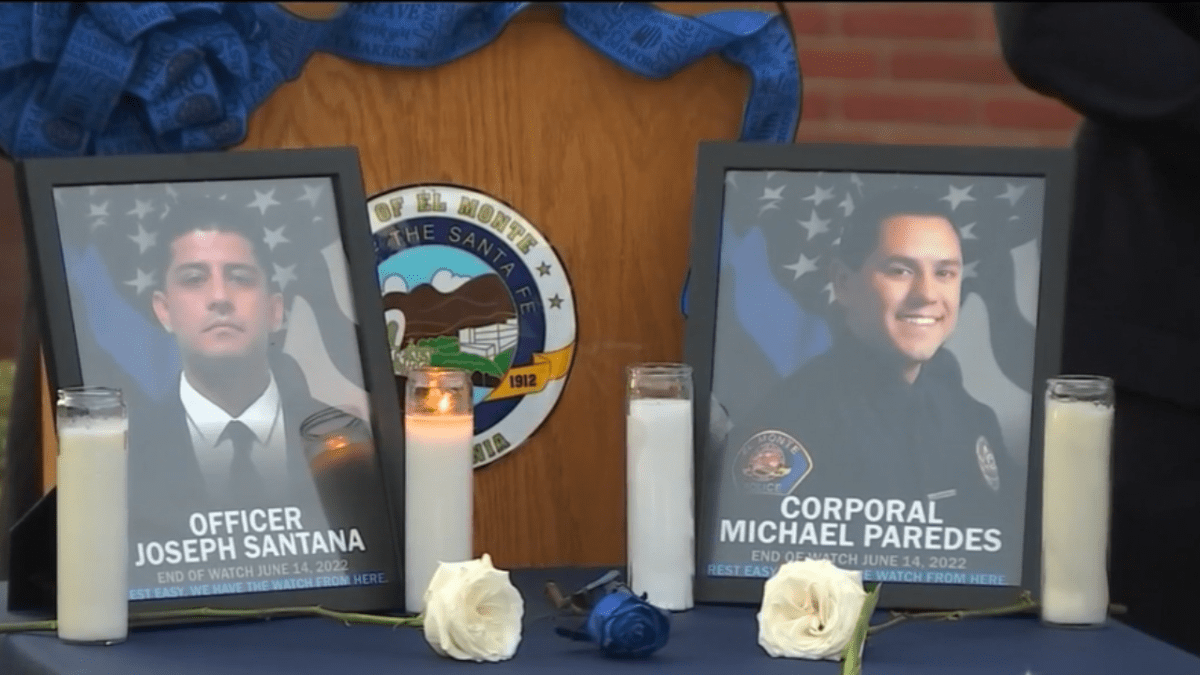 A solemn procession will set off from the El Monte Police Department headquarters Thursday morning en route to the Toyota Arena in Ontario, where a memorial service will be held for two El Monte police officers fatally shot in the line of duty.

Officers and officials from throughout the Southland are expected to take part in Thursday morning’s remembrances of Sgt. Michael Paredes, 42, and Officer Joseph Santana, 31, who were gunned down June 14 while responding to a reported stabbing at a motel. Both leave wives and young children.

The procession is set to begin at 8:15 a.m. from the El Monte Police Department, then travel on Valley Boulevard to Garvey Boulevard, then east on the San Bernardino (10) Freeway to Toyota Arena.

The service will begin around 10 a.m. and last until about 1 p.m. It will not be open to the public but will be open to all uniformed law enforcement personnel, who are expected to turn out in force.

Paredes and Santana were fatally shot the afternoon of June 14 when they entered a room at the Siesta Inn at 10327 Garvey Ave. to confront a suspect in a reported stabbing.

The suspect, 35-year-old probationer Justin William Flores, ran from the room after the shooting and exchanged gunfire with at least one other officer in a parking lot. He subsequently died at the scene of a self-inflicted gunshot wound to the head, according to the Los Angeles County coroner’s office.

El Monte police officer, Michael Paredes, killed in the line of duty will be posthumously promoted.

Paredes and Santana were both shot in the head, according to the coroner’s office. They were taken to Los Angeles County-USC Medical Center, where they were pronounced dead.

Paredes was a corporal at the time of the shooting, but was posthumously promoted to sergeant.

Both officers lived in Upland but were raised in El Monte, and both were married fathers with children.

Paredes began as an EMPD cadet and was sworn in as a full-time police officer in July 2000, city officials said. He is survived by his wife of 18 years, a 16-year-old daughter and a 14-year-old son.

Santana spent six years working for the city’s Public Works Department, then worked for three years as a San Bernardino County sheriff’s deputy. He joined the El Monte Police Department last year. He is survived by his wife of seven years, a 9-year-old daughter and 2-year-old twin sons.

Following the officers’ deaths, Los Angeles County District Attorney George Gascón came under criticism for policies that critics said allowed Flores — a felon with a history of arrests — to be on the street.

Flores was given a plea deal last year that allowed him to avoid prison time for being in possession of a firearm. As a result of the plea, charges of methamphetamine possession and being a felon in possession of ammunition were dropped, and Flores was placed on two years probation, serving just 20 days in jail.

Santana’s mother, Olga Garcia, said policies implemented by Gascón led to the deaths of her son and Paredes.

Gascón — the target of a recall effort — insisted the plea agreement was appropriate under the circumstances.” He also conceded that we have an imperfect” criminal justice system, and said it’s impossible to “predict 100% of the time” what will happen with criminal defendants in the future.

The Los Angeles County probation department has also, subsequently, come under criticism for its handling of Flores’ case.

Wednesday, the Los Angeles Times reported that, in the days before the officers’ deaths, the county probation department had received reports Flores was in possession of a gun and had beaten a woman. However, Flores had not been seen in person by his probation officer in more than six months, the newspaper reported.

The lobbying organization Peace Officers Research Association of California has established a fundraising campaign on behalf of the officers’ families. Donations can be made at porac.org/fundraiser/el-monte-policeofficers/.

More than $382,000 had been raised through the effort as of Wednesday.