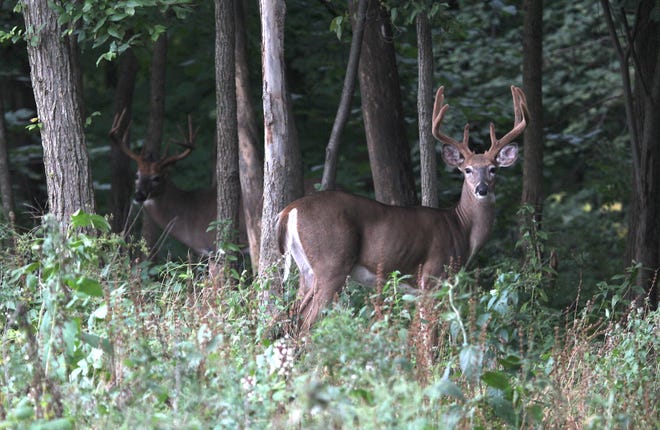 Deer hunters in Mississippi will have a chance to harvest a buck in velvet during the state’s first early archery hunt in September.

The season is set for Sept. 16-18. Russ Walsh, wildlife chief of staff for the Mississippi Department of Wildlife, Fisheries and Parks, said that time reaches a balance between allowing bucks to reach their maximum antler growth for the year and giving hunters a chance to harvest them before they shed their velvet.

“We feel like that mid-September range is going to capture that range; not too early, not too late, but just about right,” Walsh said. “That mid-Sept. would strike that balance.”

During the growth period, white-tailed bucks’ antlers are covered with a velvet-like outer layer. According to the Mississippi State University Deer Ecology and Management Lab, as blood flow in the antlers is restricted due to hardening, the velvet layer dies and bucks rub it off on vegetation.

Subscriber exclusive:Want a hunting camp that’s the envy of your friends? Here’s what $13.9 million gets you

Subscriber exclusive:He’s at it again: This buck in a Mississippi deer study just won’t stop traveling

This generally occurs before the opening day of the traditional archery season for deer which is Oct. 1 for most of the state and Oct. 15 in the Southeast Unit.

The season came about during the 2022 Legislative session when lawmakers passed House Bill 1035. Author of the bill, Rep. Scott Bounds, R-Philadelphia, said in an earlier interview he introduced the bill in response to bowhunters.

Bounds said the season also falls at a time when some bucks in Mississippi may be in the process of shedding their velvet.

“I’ve talked with bowhunters who like to harvest a buck that’s shedding,” Bounds said. “It’s a unique rack.”

• Only legal bucks for the respective deer management unit may be harvested.

• The bag limit is one legal buck and counts toward the annual antlered deer bag limit.

• Hunters, including license-exempt hunters, must report their harvest by 10 p.m. the day of harvest. Hunters can report via the MDWFP smartphone application or MDWFP web portal.

• All hunters, unless exempt or have a lifetime license, must possess a valid Velvet Season Permit. The cost of the permit is $10 for residents. For non-residents, the fee is included in the $50 deer permit.

• All harvested bucks must be submitted for CWD sampling to a MDWFP CWD drop-off freezer or to an MDWFP participating taxidermist within five days of harvest.

Early season on private land only, for now

The bill creates an early season on private land and, at the discretion of the Commission on Wildlife, Fisheries and Parks, on wildlife management areas. However, there won’t be an early archery season on any WMAs this year.

Walsh said there has not been enough time for the department to determine how to best implement the early season on WMAs, so the department has decided to take a slow approach.

“We want to have time to iron out any kinks in the season, if there are any,” Walsh said. “We’ll monitor how this season goes and decide how we want to go about it on WMAs. We want to take our time and do it right.”

Chronic wasting disease, which is fatal for deer, was first detected in Mississippi in 2018. Since then, Mississippi has documented 127 cases.

In an effort to gain a better understanding of the disease’s prevalence and spatial distribution, hunters participating in the early archery season are required to have their bucks tested.

“For us, what this provides is those likely mature buck samples which have shown to have a higher prevalence of CWD,” Walsh said. “Hopefully, this will be a good disbursement of samples.

“There are still areas that we don’t get near the samples we need. Samples will come in from all over the state, so that will be a good start to the sampling season.”

Hunters are also required to report their harvests to provide additional data for biologists.

“They can use the app or the web portal,” Walsh said. “That’s all set up and easy to use.”

Activists have spent their lives outside Mississippi's last abortion clinic, what's next?

What you need to know