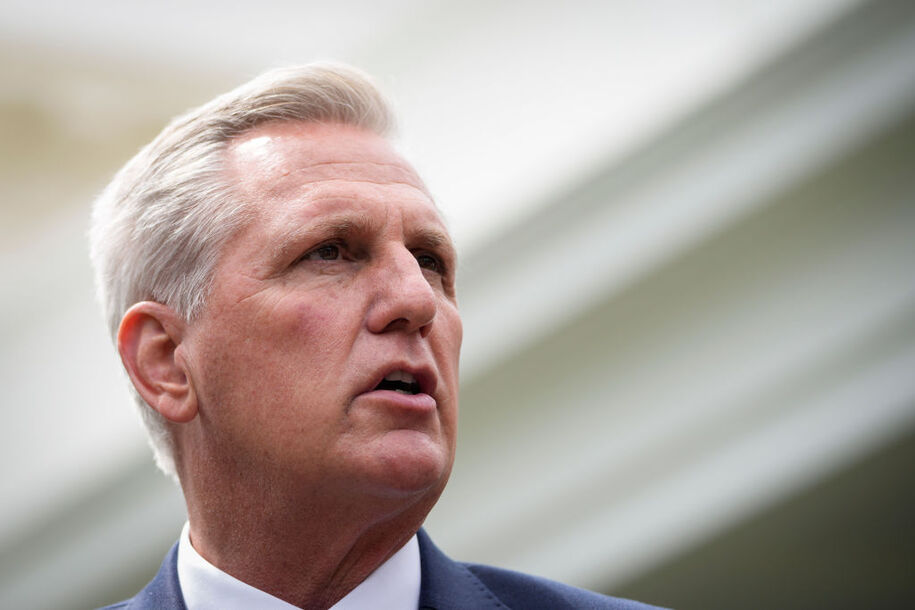 McCarthy concluded the best thing to do was just axe the messenger, so House Republicans could duck in and out of the Fantasy Island cocktail party whenever they pleased. He desperately hoped to live in two worlds—one where he could visit the White House and claim that questioning the legitimacy of the election was “all over with” now, and one where he could simultaneously send a fundraising text to the GOP base trashing the president as “Corrupt Joe Biden.”

McCarthy had it all worked out. With Cheney in the rearview mirror, he could skim money and support from both real-world Republicans pretending the party might revert to form post-Trump, and the Fantasy Island Trumpers sloshing down that mesmerizing conspiracy Qool-Aid.

The problem is, when McCarthy axed Cheney, he didn’t actually silence her—that was just how things went in his fantasy land. Back in the real world, McCarthy handed her a megaphone and cut her loose to terrorize him and House Republicans for all time. Cheney, not exactly a political neophyte, is now a woman on a mission, with nothing to lose.

Following her ouster, Cheney immediately exited the room of her failed execution to step before cameras and pledge, “I will do everything I can to ensure that the former president never again gets anywhere near the Oval Office.” Then she flitted off to a sit-down in reality with NBC’s Savannah Guthrie, followed by another fantasy-buster with Fox News’ Bret Baier.

A trail of GOP tears followed behind her. “That’s what it looks like when somebody is running for president,” Rep. Mike Rogers of Alabama informed his colleagues as they watched Cheney field questions from reporters.

Indeed, when Guthrie asked Cheney about a 2024 presidential bid, she landed on doing “whatever it takes” to keep Trump from ever reclaiming control over the U.S. government. Few things could grate on McCarthy more than a Cheney bid for the GOP nomination. Even though she would surely lose, she could also potentially drive a wedge through the party’s base.

But there’s a long way to go between now then. In the interim, Cheney will be fighting for her seat in what is sure to be one of the most highly scrutinized races of the 2020 cycle. Contrary to popular belief, she may still have a chance there, given a potentially crowded field and the fact that residents of any affiliation can vote in the Republican primary in Wyoming if they switch their party registration. Cheney also raised $1.54 million in the first quarter, her best fundraising quarter since she was elected in 2016, according to Reuters.

But Cheney’s ouster could also ripple through the midterm races of other GOP members—particularly old-school conservative ones.

“What they’re going to open the door to is a situation where nobody’s Trumpy enough,” said former GOP Congresswoman Barbara Comstock, who lost her suburban Virginia seat in 2018 in the blue wave of anti-Trump sentiment that swept the nation. “It’s a problem for everybody.”

That all remains to be seen. For now, liberals can just revel in the fact that Cheney will spend the next year-and-a-half dropping whatever little reality bombs she can on McCarthy’s world of make-believe.

On Friday, Cheney posited in an ABC News interview that McCarthy should “absolutely” testify to the Jan. 6 commission about his conversations with Trump that day.

“I wouldn’t be surprised if he were subpoenaed,” Cheney told ABC’s Jon Karl. “I think that he very clearly, and said publicly, that he’s got information about the president’s state of mind that day.” Just in case anyone had forgotten what McCarthy said.

“I wouldn’t be surprised if he were subpoenaed.”

McCarthy axed Cheney this week because he was desperate to focus on 2022, without a nagging reminder that he and his caucus lied so profusely to the American people that a certain portion of them are now permanently deluded.

If McCarthy had kept Cheney close, he might have been able to mitigate the damage to some extent. But to keep her in thatpost would have required real leadership on his part, and McCarthy’s a squishy sycophantic demagogue in the worst sense of the word, who’s in over his head.

Cheney is never going to let him, or any Republican voter with a foot still in reality, forget it.