Matthew McConaughey Has Something Real To Say About Guns 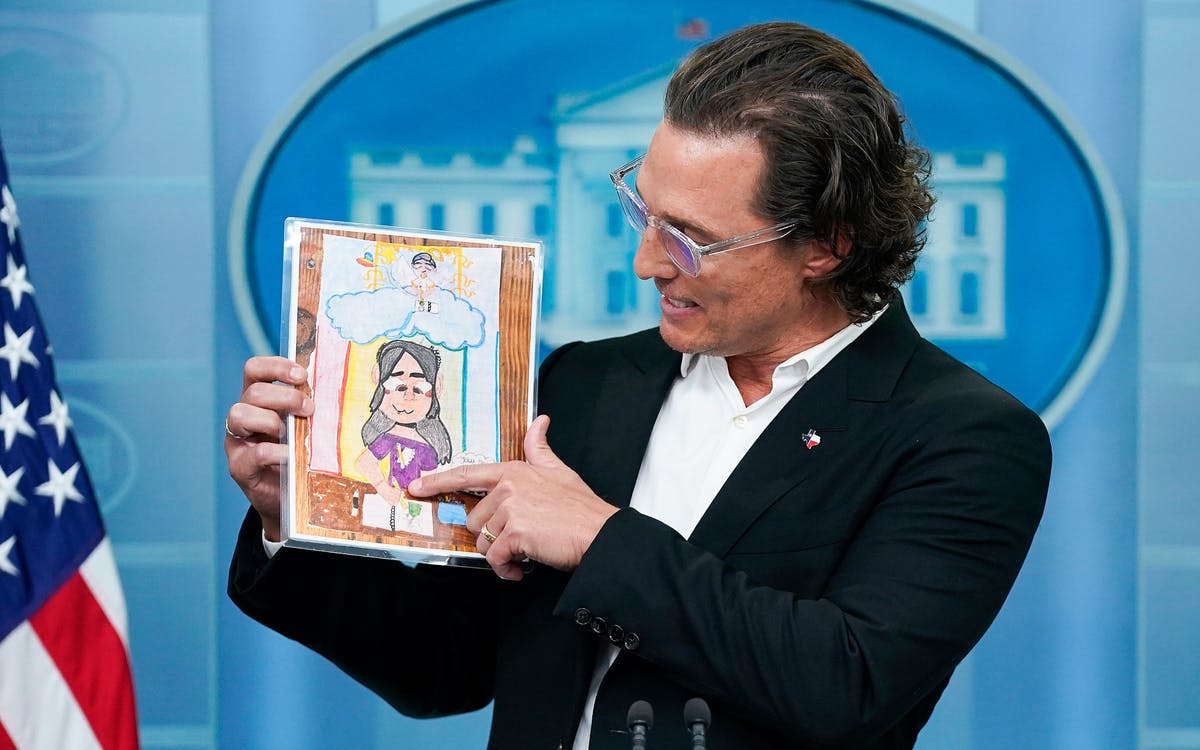 By now, you’ve surely seen snippets from Matthew McConaughey’s comments at Tuesday’s White House press briefing making their way onto your social media timelines. In a profoundly moving twenty-minute speech, the world-famous movie star and Uvalde native got visibly emotional sharing details of the lives cut tragically short in the May 24 school shooting in his hometown. As he relayed some of the details of the victims’ lives—ten-year-old Alithia Ramirez dreamed of going to art school in Paris; Maite Rodriguez wore green Converse high-tops with a hand-drawn heart on the right toe, a reminder of her love for the planet, and they were the only way authorities could identify her—McConaughey paused to hold back tears, even slamming his fist on the podium a couple of times. Cynics might reduce the scene to an actor  acting, but it was pretty obvious that McConaughey’s despair was sincere—reflecting the grief, anger, and helpless frustration many have felt in these past two weeks. How have we made it so easy for someone to murder so many children in such a small amount of time? And with the current congressional gridlock, is there anything any of us can do to keep it from happening again, and again, and again?

But Matthew McConaughey is not like the rest of us; he is extremely famous, and he has been known to insert himself into national dialogues outside of his areas of expertise (which are: acting and Lincoln automobiles). For the past few years—since it became a truth universally known that a Hollywood celebrity can get elected to higher office no matter his experience—many have speculated on McConaughey’s political aspirations. He has leaned into this, frustratingly so, teasing a possible run for governor of Texas and taking any and every opportunity to present himself as a leader in a time of statewide, or national, crisis. We’ve all gotten used to him in this new role, but begrudgingly, as one of the markers of McConaughey’s stump speeches is an infuriating lack of specificity. The most light he’s ever shed on his political beliefs was in his memoir, when he said he came from a “long line of rule breakers” and “outlaw libertarians.”

So it came as no surprise that upon hearing of the Robb Elementary School shooting, the first statement McConaughey released said more or less nothing. He expressed sadness and exasperation, but could offer no call to action more direct than for every American to look in the mirror and find out how to “separate our wants from our needs.”

That was a different Matthew McConaughey from the one who showed up this week. It all started on Monday morning, when the actor published an op-ed in the Austin-American Statesman calling not just for unity, as per usual, but for specific policy changes that would make it harder for people to kill children (and others) with AR-15s: universal background checks, red flag laws, national waiting periods for buying assault rifles, and raising the minimum age for assault rifle purchases from 18 to 21. Anticipating the rebuttals one often hears in this debate, McConaughey added that “the need for mental health care, school safety, the prevalence of sensationalized media coverage, and the decaying state of American values are all long-term societal factors that must be addressed, but right now, we don’t have the luxury of time. We need to focus on corrections and countermeasures that can also and immediately reduce the gun violence tragedies that have become too common in our country.”

McConaughey’s White House comments would likely have been effective no matter what happened, even if he only talked about the victims. His fame alone would keep their stories in the news, and his skilled delivery would keep Americans from forgetting our own grief, moving on from the national problem on display in Uvalde without creating any solution. This is, after all, a man who has spent decades perfecting the art of creating a narrative that resonates. But he went further than that, mentioning the same policy changes he had outlined in his op-ed. “We need responsible gun ownership. Responsible. Gun. Ownership,” the actor proclaimed, a few minutes after reminding us about Robb Elementary School teacher Irma Garcia, who was killed in the May 24 shooting, and her husband, Joe, who died two days later—of a broken heart, relatives said.

When McConaughey stood at the podium in the White House press room on Tuesday afternoon, having spent the morning meeting with gridlocked senators to discuss these very policies, he said, “This moment is different.” We, as a nation, have been through no shortage of grief cycles following mass shootings, but, the actor said, “We are in a window of opportunity right now that we have not been in before, a window where it seems like real change can happen.” You know, if it were anybody else saying that, I might not believe them. But McConaughey’s whole deal has been to position himself as a middle-of-the-road public figure by not expressing any specific belief that could tie him to either side, and now he’s publicly aligned himself more with gubernatorial candidate Beto O’Rourke’s platform than that of Governor Greg Abbott. So if Matthew McConaughey feels passionate (and safe) enough to specifically call for gun control then, yeah, this time feels different. And thank God for that.

Where to Sell Your Antiques (Near You and Online)