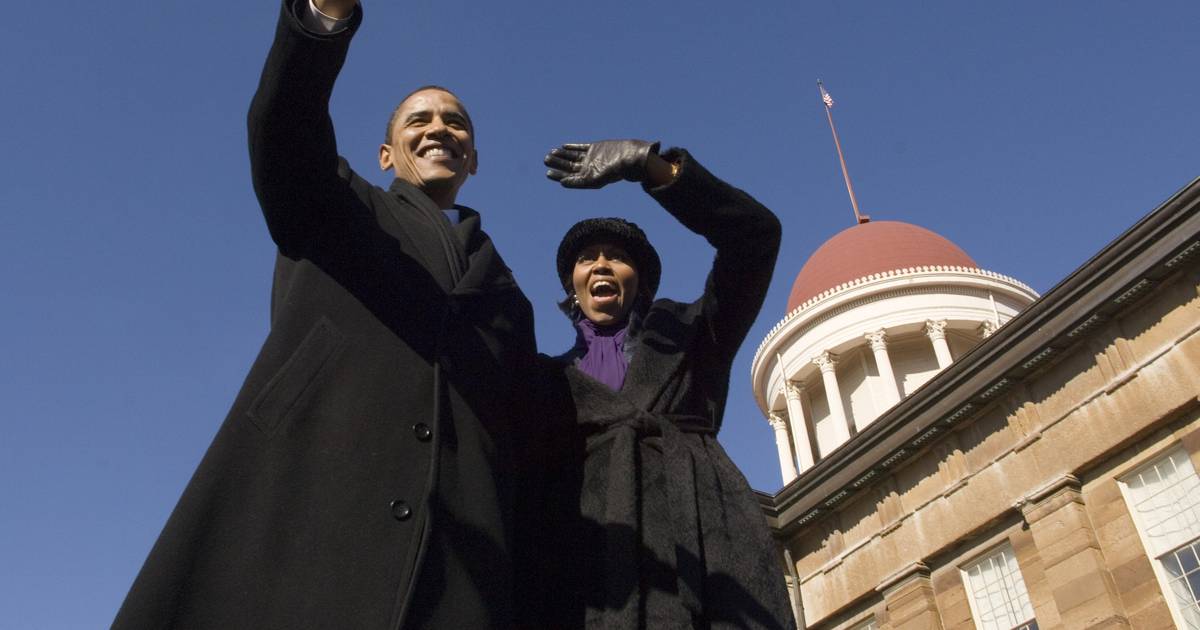 SPRINGFIELD — The weather turned frigid in the state capital on Wednesday, just in time for the dedication of a marker commemorating the day nearly 16 years ago when thousands braved single-digit temperatures to see then-U.S. Sen. Barack Obama announce his 2008 presidential bid from the steps of the Old State Capitol.

The roughly 47–by-44-inch marker, which stands on the southeast corner of the Old Capitol grounds in downtown Springfield, also commemorates Obama’s 2008 announcement that then-Sen. Joe Biden of Delaware would be his running mate. It adds historical resonance to a building most famous as the site of Abraham Lincoln’s “House Divided” speech to the 1858 Republican State Convention.

Gov. J.B. Pritzker, who backed Obama’s rival, then-Sen. Hillary Clinton of New York, in the 2008 Democratic primary, said the marker honoring the country’s first Black president serves as “a reminder that one of our favorite sons brought a message of hope that resonated at a crucial time to people all across the world.”

“Here in the Land of Lincoln and the home state of Barack Obama, our people will never stop believing that a better future is possible,” said Pritzker, who has sought to downplay talk of his own presidential ambitions.

Unlike Obama’s Feb. 10, 2007, announcement, Wednesday’s ceremony was held indoors, leading Illinois House Speaker Emanuel “Chris” Welch, the first Black legislator to hold that position, to joke that if the former president were in attendance, “he’d be really disappointed in us a little bit because he’d be like, ‘Why are we wimping out inside?’”

On a more serious note, Welch said Obama “inspired so many people who had never been involved in politics before to get involved.”

“He stepped up at a time when this country was deeply divided, reminiscent of what’s going on today,” Welch said.

Senate President Don Harmon of Oak Park, who’s among the handful of current state senators who served in the legislature with Obama, said colleagues “always knew he was bound for bigger things, although even we could not have predicted the meteoric rise from senator to president in four years.”

“He carried to the highest office in the land the same curiosity, demeanor and willingness to ask tough questions that he held while serving here in Springfield,” Harmon said. “He made us proud as he expanded health care for millions, brought our economy out of the Great Recession, joined with global leaders to fight climate change, showed unprecedented support for the LGBTQ community, and updated our country’s immigration policies to make the American Dream more accessible to everyone.”

The dedication of a marker acknowledging two of the former president’s key moments in Springfield comes as his foundation continues its work on the Obama Presidential Center in Jackson Park on Chicago’s South Side, which is targeted for opening in 2025.

In addition to being the place where Obama’s political career was launched with legislative achievements, including the first state law aimed combating racial profiling, Springfield “was also a place where he learned a lot of lessons that stayed with him all throughout his presidency,” said Michael Strautmanis, the Obama Foundation’s executive vice president for civic engagement.

That included the “lesson that no matter where you come from, no matter what you look like, you can find common ground with others and that you can come together and create solutions that will improve people’s lives,” Strautmanis said.

“That is a critical lesson, and it is something that the Old State Capitol stands for,” he said. “This place stands not just for democracy, but it stands for the fact that democracy can work.”

When the Obama Presidential Center opens, Strautmanis said, the foundation hopes visitors from around the world will take the time to visit Springfield and that visitors to the capital city will make the trip to the South Side.