Mario Draghi to shift Italy’s vaccination priority on to elderly 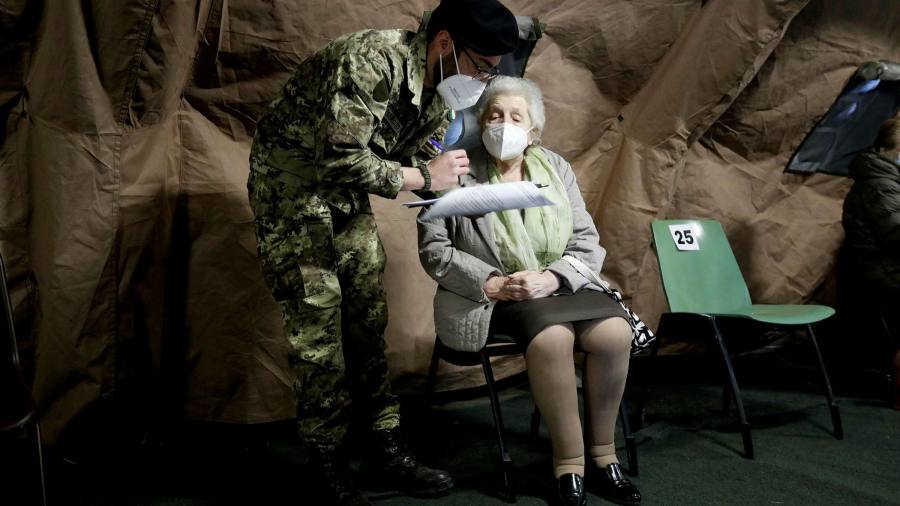 Mario Draghi is poised to outline an acceleration of Italy’s Covid-19 vaccination programme by giving the elderly priority in the queue for jabs at a time when the country is experiencing a sharp increase in daily infections.

Measures to be detailed on Friday by Italy’s prime minister are expected to include drafting in the Italian army to speed up administering doses to the over 70s, who have been underserved, according to a government official.

Under Italy’s current vaccine rollout, which was devised by the preceding government of Giuseppe Conte, health and other key workers were given priority. This has resulted in cohorts between 20 and 39 securing relatively more doses than those in their 70s, even though the latter are more at risk of hospital admission and death.

Only 2 per cent of Italians in their 70s have received a dose, the lowest rate among all adults aged more than 20. As a comparison, 6 per cent of Italians in their 60s and 8 per cent in their 50s have received the jab. A little over one in three people aged more than 90 have had at least one dose, as have 29 per cent of people in their 80s. This pattern is not seen in other countries including those that have not strictly prioritised by age, such as the US, where the proportion of vaccinated people nonetheless rises with age.

Italy’s revised vaccination campaign comes as scientific evidence tends to show inoculating the elderly even with one shot significantly reduces mortality, and that giving jabs to young people has been proven a suboptimal strategy.

“I completely understand the desire to vaccinate healthcare workers as they come into contact with a lot of vulnerable people but that is not going to do as much to reduce deaths and hospitalisations as vaccinating those who are most at risk,” Paul Hunter, professor of medicine at the University of East Anglia said.

Draghi’s measures will coincide with regulators authorising the Oxford/AstraZeneca vaccine for those over 65 up to 80. They also come as infections in Italy were over 22,000 on Wednesday, from 13,114 infections recorded on March 1.

The Italian premier will give priority “to the most fragile people and at-risk categories,” he said this week. “Waiting your turn is also a way to protect the health of our weakest citizens,” he said.

Italy has recorded over 100,000 Covid-19 deaths, of which over 80 per cent were among the over 70s, according to data from the government. Yet out of the 5.7m doses administered by Italy so far, only 30 per cent have gone to Italians in this age group.

Meanwhile, people aged between 20 and 39, who have accounted for fewer than 300 Covid-19 deaths, have received 36 per cent of all administered doses. Healthcare workers have been given 43 per cent of the doses — or 2.6m — according to the health ministry.

Non-health care workers, many of them young people, have secured nearly one million doses, compared with 457,000 injections performed in care homes. Last month, for instance, the Tuscany government decided to use some of its Oxford/AstraZeneca jabs for legal professionals, teachers and members of the armed forces. Italian medical schools also started vaccinating students last month.

Another challenge for Draghi will be to ensure unused doses of vaccines are administered, with some Italian regions being slower than others. Sardinia for instance, is yet to use over a third of its doses, while Lombardy has about a quarter left. Overall, the country has used over 80 per cent of all available doses.