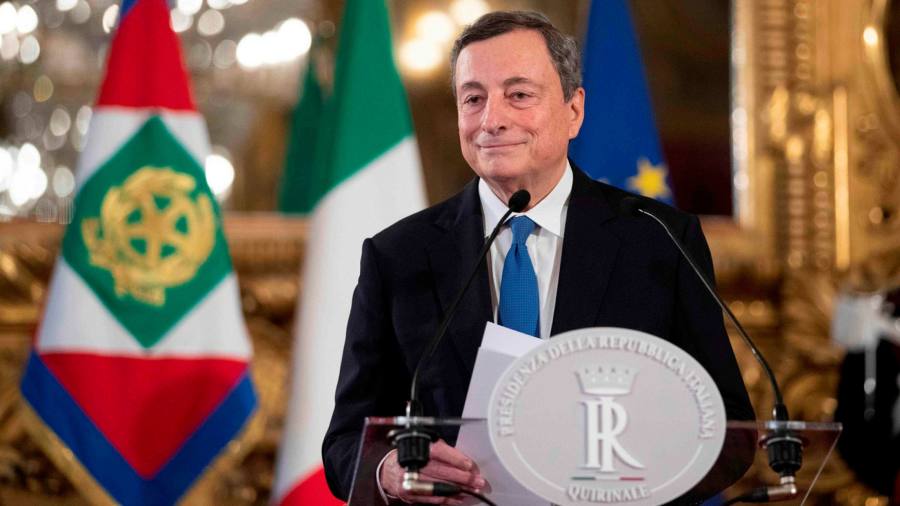 Mario Draghi has accepted a request from Italy’s president to attempt to form a national unity government as the country battles to contain the Covid-19 pandemic and the most severe economic crisis in its postwar history.

Mr Draghi, a former president of the European Central Bank who has built a reputation as one of the continent’s most highly regarded public officials, on Wednesday called for unity ahead of starting political consultations with the country’s political parties after receiving a mandate from Italy’s president Sergio Mattarella.

“I thank the president of the Republic for the trust he has granted me. It is a difficult moment,” Mr Draghi said in a brief speech delivered at the country’s presidential palace as he outlined the extent of the task facing the eurozone’s third-largest economy.

“Defeating the pandemic, completing the vaccination campaign, offering answers to citizens, relaunching the country: these are the challenges we face,” he said.

Mr Draghi, who has no history in electoral politics, has been thrust on to the political stage at a time when Italy has recorded more than 88,000 deaths during the Covid-19 pandemic.

He must now attempt to win enough support among the country’s lawmakers to form a new unity government. Failure to achieve this would in all likelihood trigger snap elections that Mr Mattarella has warned would cause significant uncertainty in the middle of the pandemic.

Mr Draghi said he was confident that a “responsible response” would emerge after consultations with the leaders of Italy’s political parties as he attempted to forge a new coalition.

He also made explicit reference to the “extraordinary resources of the EU” that were available to Italy as a result of the €200bn in loans and grants the country is expected to receive as part of the bloc’s post-pandemic recovery fund.

The former ECB president was drafted in by Mr Mattarella after attempts to revive a coalition led by former prime minister Giuseppe Conte collapsed this week, leaving the country lacking a stable government at the height of a grave national crisis.

Mr Draghi must now begin consultations with parties across Italy’s political spectrum, some of which face painful decisions about whether to support his possible government even though it could cause a political backlash among their supporters.

To achieve a majority he will almost certainly have to convince one of either the anti-migrant League party, led by Matteo Salvini, or the formerly anti-euro Five Star Movement to support him.

On Wednesday Mr Salvini did not rule out supporting a Draghi government, but said this would be conditional on the policies that were proposed.

Yet Mr Salvini has repeatedly called for new general elections, which would allow him to capitalise on his party’s strength in national opinion polls.

“For us, supporting Draghi would be an effort and a big gamble,” Edoardo Rixi, a League MP, told the Financial Times. “On the one hand we appreciate his skills, on the other we fear a government that does not protect the national interest. This is the dilemma that grips not only the League, but the entire centre right.”

Vito Crimi, the interim leader of the Five Star Movement, on Tuesday ruled out supporting a technocratic government led by Mr Draghi. However, several Five Star lawmakers said the party was heavily divided on the issue and could potentially split.

“For the Five star movement, going to elections after supporting the Draghi government would mean going below 10 per cent in the polls,” said one Five Star lawmaker.

Daniela Sbrollini, an Italia Viva MP, said she believed that Mr Draghi was very likely to win enough support to form a government. “There will be a Draghi majority and it will be cross-party,” she said.

“Mario Draghi represents authority, the most pro-European choice that could be made, and therefore a guarantee in the eyes of Europe and the world. Such a high-profile figure will allow us to start again and turn over a new leaf with a strong pro-European and political imprint.”