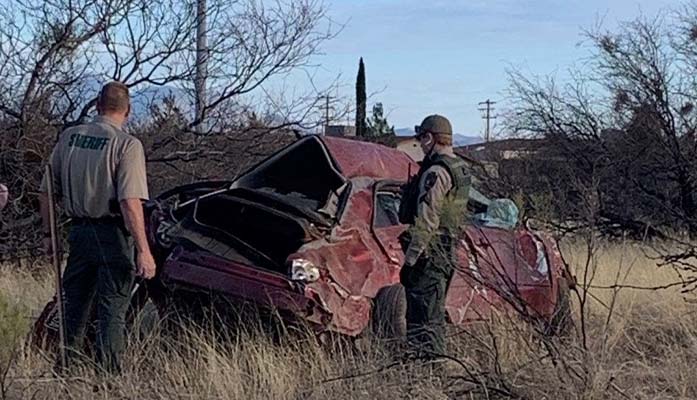 Despite efforts to warn off prospective human smugglers, law enforcement officers across Cochise County continue to make several arrests a month of drivers from Maricopa County hoping to earn a quick buck transporting undocumented immigrants away from the U.S. / Mexico border.

Earlier this year an estimated 1,000 vehicles per month were coming into Cochise County to engage in drug or human smuggling. Although the numbers typically go down in the hotter summer months, the demand for drivers remains high enough right now to keep pay rates at more than $1,500 per person.

State courts cannot prosecute for human smuggling, but Cochise County Attorney Brian McIntyre is ensuring such criminal activities do not go unpunished. As a result, nearly 200 defendants have been charged in 2022 with a variety of offenses such as felony endangerment for putting passengers at risk when a driver fails to yield during a traffic stop.

Other charges include fleeing from law enforcement as well as kidnapping if a driver ignores a passenger’s demand to be let out of the vehicle. Some drivers are also finding themselves facing murder charges, including Felix Mendez, who turned 17 while sitting in the Cochise County jail facing the prospect of life in prison after the Mesa teen failed to yield during a traffic stop last October.

Mendez was charged with first degree murder after he ran a red light along State Route 90 between Benson and Sierra Vista, shearing Wanda Sitoski’s vehicle in half. Sitoski, 65, was driving to meet her son for a birthday celebration.

Court records show Mendez is also charged with numerous other counts involving risks to the three undocumented immigrants in his vehicle at the time of the crash. A judge has ordered Mendez to remain in the county jail without bond as he awaits trial. A trial setting hearing is planned for later this summer.

Sheriff Mark Dannels has frequently drawn attention to the actions of the cartel’s smuggling recruiters and coordinators who tell unsuspecting drivers from the greater Phoenix metropolitan area of how easy it is to outrun law enforcement officers.

However, drivers quickly learn there is nowhere to hide in the rural border county. This is due to significantly less traffic to blend into, as well as access to that law enforcement agencies have to drones and surveillance cameras across the region, along with state and federal helicopters to assist with tracking a suspect’s vehicle.

One Maricopa County teen suffered a broken foot earlier this year when he crashed his parents’ car in the mountains of Santa Cruz County while trying to outrun USBP agents. He now has a felony conviction and his foot injury cut short what court documents show was a promising athletic career which was expected to provide him a college scholarship.

Other drivers attempting to flee have even gone after peace officers in an effort to get away. In March, a Huachuca City police officer narrowly escaped injury when Taylor Seth Johnson of Mesa drove a Dodge Journey directly at the officer’s patrol car during a multi-agency pursuit which started south of Sierra Vista.

Johnson, 25, then drove southbound in the northbound lanes of State Route 90 and nearly struck a Cochise County Sheriff’s vehicle while reaching speeds of 110 miles per hour. His vehicle was disabled after driving over tire deflations devices, otherwise known as spike strips.

Court documents show Johnson continued driving nearly 90 miles per hour even though the front driver’s side tire was disintegrating. It took another 15 miles before the vehicle came to a stop at which time Johnson and a passenger, Kanardie Watts, fled into the desert.

Johnson and Watts, 21, were quickly apprehended. Four undocumented migrants -including children ages 8 and 10- were found inside the vehicle.

A grand jury has indicted Johnson on 15 felonies. Johnson’s speedy trial deadline is Sept. 21 although Judge Jason Lindstrom was advised earlier this month the parties are engaged in plea negotiations.

A Glendale man, Nickolas Eddie Yousif, recently accepted a plea offer from the Cochise County Attorney’s Office as part of an Early Resolution Court program. Details of Yousif’s plea have not been updated to the court’s public access system but will be available before Yousif is sentenced next month.

The charges against Yousif, 23, stem from an incident in early March when he was booked into the Cochise County jail on 10 criminal counts, including five for felony endangerment and one for unlawful flight from a marked law enforcement vehicle at speeds of more than 90 miles per hour.

Court records show Yousif was seen by Sierra Vista PD Det. Matthew Quinn driving for several blocks down the center turn lane of State Route 92, nearly colliding head-on with multiple vehicles. It was later determined Yousif had been the subject of a pursuit near the board minutes earlier by U.S. Border Patrol agents which was suspended when Yousif drove away at nearly 100 miles per hour.

While Yousif is awaiting sentencing, William Maurice Brown of Mesa is still waiting for a trial date to be set in his murder case.

Brown, 27, was already on probation in Maricopa County for felony aggravated assault when he came to Cochise County in January 2021 to smuggle several undocumented immigrants in exchange for cash. When USBP agents tried to execute a traffic stop, Brown drove his pickup at high speeds through a traffic circle, causing the vehicle to flip.

Two of the migrants died, leading a grand jury indictment for 15 felonies including two counts of first degree murder and several counts of felony endangerment. Brown is expected to stand trial later this year on murder charges unless he accepts a plea deal offered by McIntyre’s office.

A change of plea hearing is tentatively scheduled for July 5 but could turn into a trial setting conference.

Two Glendale residents have been convicted for their roles in separate smuggling incidents.

Kevin Lamonte Harris was recently sentenced to three years in the Arizona Department of Corrections after pleaded guilty in a Cochise County courtroom to felony flight and driving under the influence while engaged in smuggling of three undocumented immigrants in January.

Harris, 23, provided a false name to officers who later found he had an outstanding warrant out of Maricopa County for weapons misconduct. Meanwhile, Denise Beranice Ortiz must serve three years of supervised probation for her actions last November in fleeing from a marked law enforcement vehicle while three undocumented immigrants were in the vehicle Ortiz, 23, was driving.