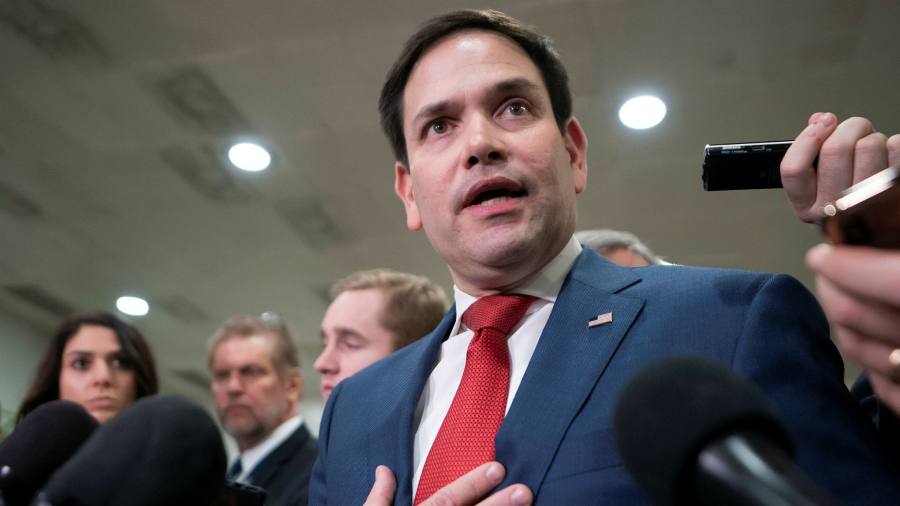 Workers seeking to form the first Amazon union in the US received a boost from an unlikely source on Friday, after Republican senator Marco Rubio endorsed their efforts to organise and framed it as the latest salvo in America’s culture wars.

The Florida senator, who voted against raising the federal minimum wage, accused the ecommerce giant of waging “a war against working-class values” in an opinion piece published in USA Today.

Almost 6,000 workers at a Amazon warehouse — or “fulfilment centre” — in Bessemer, Alabama, began voting by postal ballot last month on whether to unionise, and have until March 29 to make their decision. To pass, the union needs 50 per cent of the returned vote, plus one worker.

Acknowledging the Republican party’s longstanding hostility to worker representation, Rubio instead suggested workers should unionise in order to resist any effort by Amazon to use its power and influence to be “allies of the left”.

“It is no fault of Amazon’s workers if they feel the only option available to protect themselves against bad faith is to form a union,” wrote Rubio, who ran to be the Republican candidate for president in 2016.

He added: “Today it might be workplace conditions, but tomorrow it might be a requirement that the workers embrace management’s latest ‘woke’ human resources fad.”

He added: “The Silicon Valley titan uses anti-competitive strategies to crush small businesses, bans conservative books and blocks traditional charities from participating in its AmazonSmile program. Not surprisingly, it has also bowed to China’s censorship demands.”

Previously, the company has emphasised its baseline $15-an-hour pay, which is double the national minimum wage, and generous healthcare benefits.

In practical terms, unionisation at Amazon would reduce the company’s famed ability to quickly scale its staffing up and down to meet demand. In Europe, Amazon unions have successfully organised strike action, disrupting the company’s delivery capabilities.

Union representatives say concern over conditions, such as time given for bathroom breaks, is among their key concerns.

To resist the union effort, Amazon has rolled out a website and advertising campaign targeted at workers, warning that organised labour would mean it “won’t be easy to be as helpful and social with each other”.

Ahead of the Alabama vote, the National Labor Relations Board denied Amazon’s request to hold the vote in person, rather than by post, a move that would have raised the risk of worker monitoring and intimidation, according to labour groups.

If the vote to unionise passes, workers at the Bessemer plant will join the Retail, Wholesale and Department Store Union, which represents about 100,000 workers, including at companies such as Macy’s and H&M.

In response to Rubio’s comments, RWDSU president Stuart Appelbaum said he welcomed endorsements from “all quarters”.

“Senator Rubio’s support demonstrates that the best way for working people to achieve dignity and respect in the workplace is through unionisation. This should not be a partisan issue.”

But while the senator’s endorsement highlighted hostility towards Big Tech from both sides of the political aisle, it further underlined the wildly diverging opinions on the nature of the perceived threat.

Rubio’s comments come after US president Joe Biden warned Amazon not to meddle in the worker vote, amid criticism of the company’s tactics, which have included posting anti-union material in employee bathrooms and holding mandatory meetings where employees were warned against organising.

“It’s not up to me to decide whether anyone should join a union,” Biden said in a video statement posted on Twitter. “But let me be even more clear: it’s not up to an employer to decide that either.”

The president’s statement came days after prominent labour groups accused him of falling short on his campaign promise to be “the most pro-union president you’ve ever seen”.

Some in the labour movement have billed the Alabama vote as a potential dam-breaking moment for Amazon workers across the US. Earlier this year, the Teamsters union said it was organising a union drive at an Amazon facility in Des Moines, Iowa.