March 11 is the official anniversary of the COVID-19 pandemic, and of Trump’s failure 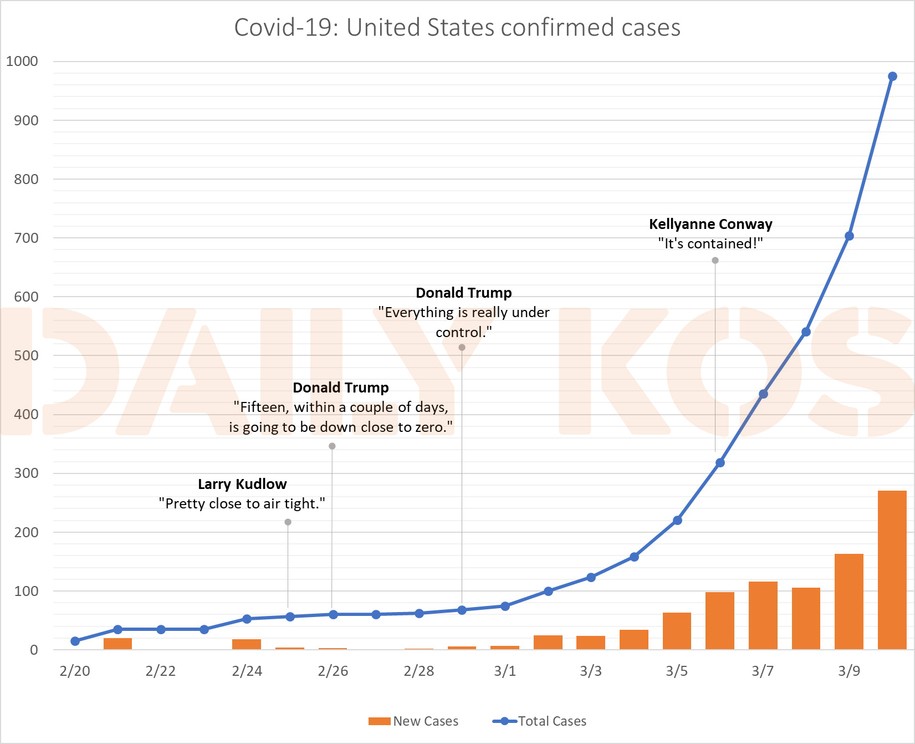 The first case of novel coronavirus in the U.S. had come all the way back in mid-January. By Feb. 5, cases had appeared in 24 counties, but it was easy to argue that this was not a pandemic, because only in China had the disease really escaped the status of a few isolated cases. One day later, the world learned that Dr. Li Wenliang, one of the first doctors to break China’s official silence and warn the world, had died of COVID-19. On Feb. 11, COVID-19 deaths exceeded 1,000, prompting the headline “Are there more grim milestones to come?” That same week, the name “Diamond Princess” was in the news as the literally ill-fated cruise ship momentarily became the center of global attention. It was on Feb. 22, that Director for the National Center for Immunization and Respiratory Diseases Nancy Messonnier, delivered a stark warning. “We’re not seeing spread here in the United States yet, but it is possible, even likely, that it may eventually happen.” Three days later, Dr. Messonnier warned that “disruption to everyday life may be severe.“

By March 11, Italy had emerged as a new European epicenter, cases of community spread had appeared in multiple states, the first U.S. death had been announced, and Donald Trump had already begun working with Fox News to deliberately downplay the seriousness of the disease. By March 11, Daily Kos had published over 60 articles on the growing threat.

But March 11 was the day when everything seemed to fall apart at once. When Dr. Messonier delivered her set of February warnings, they came with a note of hope.

”We never expected we’d catch every traveler with novel coronavirus from China.  It would be impossible.  We’re not seeing spread here in the United States yet, but it is possible, even likely, that it may eventually happen. Our goal continues to be slowing the introduction of the virus into the U.S.  This buys us more time to prepare our communities for more cases and possibly sustained spread.  This new virus represents a tremendous public health threat.”

Of all public statements, none may have been more prescient than those from Messonier. Unfortunately, the effects of her blunt—and accurate—statements wasn’t to shock the Trump White House into action. It was to bury Messonier somewhere far away from the nearest camera.

Until March 11, it still seemed possible to pretend that the U.S. might take appropriate action. That, in spite of Trump using terms like “China flu,” in spite of obvious failures to develop adequate testing, and in spite of the obvious desire to simply hope this all went away “like magic,” there might still be an opportunity to stop this train before it really left the station. Even if Trump was trying to brush the threat aside, other Republicans seemed to be treating it seriously,

A week earlier, the stock market had plummeted as traders tried to sort out what it would really mean for the United States to plunge into pandemic. And a sickening hint of things to come followed when CNBC Host Rick Santelli suggested that what the United States should do was admit defeat and help the virus infect everyone. For the sake of business.

“Maybe we’d be just better off if we gave it to everybody, and then in a month it would be over because the mortality rate of this probably isn’t going to be any different if we did it that way than the long-term picture, but the difference is we’re wreaking havoc on global and domestic economies.”

Trump had called off a visit to the CDC, but hadn’t yet interrupted his golf schedule as the real cost of what it would mean to do nothing in the face of this disease was becoming clear.

But in addition to that threat, the United States faced a leadership vacuum. Trump would not step up, and he wouldn’t allow anyone else to steal a fraction of the spotlight by taking effective action. It was clear that the action taken in China was working to contain the outbreak there. Cases in South Korea had leveled off as that government showcased how to effectively conduct a system of testing and case tracing. But the United States was still doing essentially nothing. The few tests that were available were so scarce, they were being saved for those with severe symptoms. Most people who felt ill were told to “just assume you have it and stay home.”

Please, please guys. Here in northern #Italy we made one big mistake. Everybody kept saying “It’s just flu” and now our intensive care units are collapsing. Everybody kept going outside like nothing happened and now our grandparents and parents are dying.#coronavirus is not #flu

On March 11, Dr. Anthony Fauci was busy testifying before the House Oversight Committee. He had just finished explaining how COVID-19 is “10 times more lethal than the seasonal flu,” when he was called back to the White House for an emergency meeting. That same day, the World Health Organization made it official, with WHO Director-General Tedros Adhanom Ghebreyesus delivering the news.

COVID-19 was officially a pandemic. To underline that news, Americans were shocked that evening when NBA games were called off just minutes before tipoff. Tom Hanks and Rita Wilson announced that they had tested positive for the disease. And, Trump banned most travel from Europe while insisting that he had done everything right. Trump also announced his big plan to fight COVID-19 by giving corporations a tax cut. When it came to helping individuals, addressing those losing their jobs, or offering a plan to fight the virus … Trump had nothing.

Looking back through the events of the first three months of 2020 now, it’s impossible to see them without knowing that the outcome was going to be more than half a million unnecessary deaths. Every day of Trump’s foot-dragging and downplay has a cost measured in lives lost and families devastated. March 11 was just one day among many, but it was a day when it was absolutely clear Trump was willing to let the nation drown rather than throw it a rope.

But one day after everything fell apart, there was one sign of hope for the future. On March 12, Joe Biden addressed the nation to call for a national testing program, free testing and treatment of COVID-19, and a recognition that the only way to save the American economy, was by first saving the American people.

“We must do whatever it takes, spend whatever it takes,” said Biden, to protect families and secure the economy. “This crisis will hit everyone, but it will hit people who live paycheck to paycheck the hardest. Another tax cut … will not get the job done.” He specifically mentioned workers in the gig economy, parents needing child care, children who depend on school lunches, students who don’t have internet access for online schooling, and those in need of help with rent or mortgage payments because they have lost work during this crisis. And Biden called for assistance to small businesses affected by the cancellation of events.