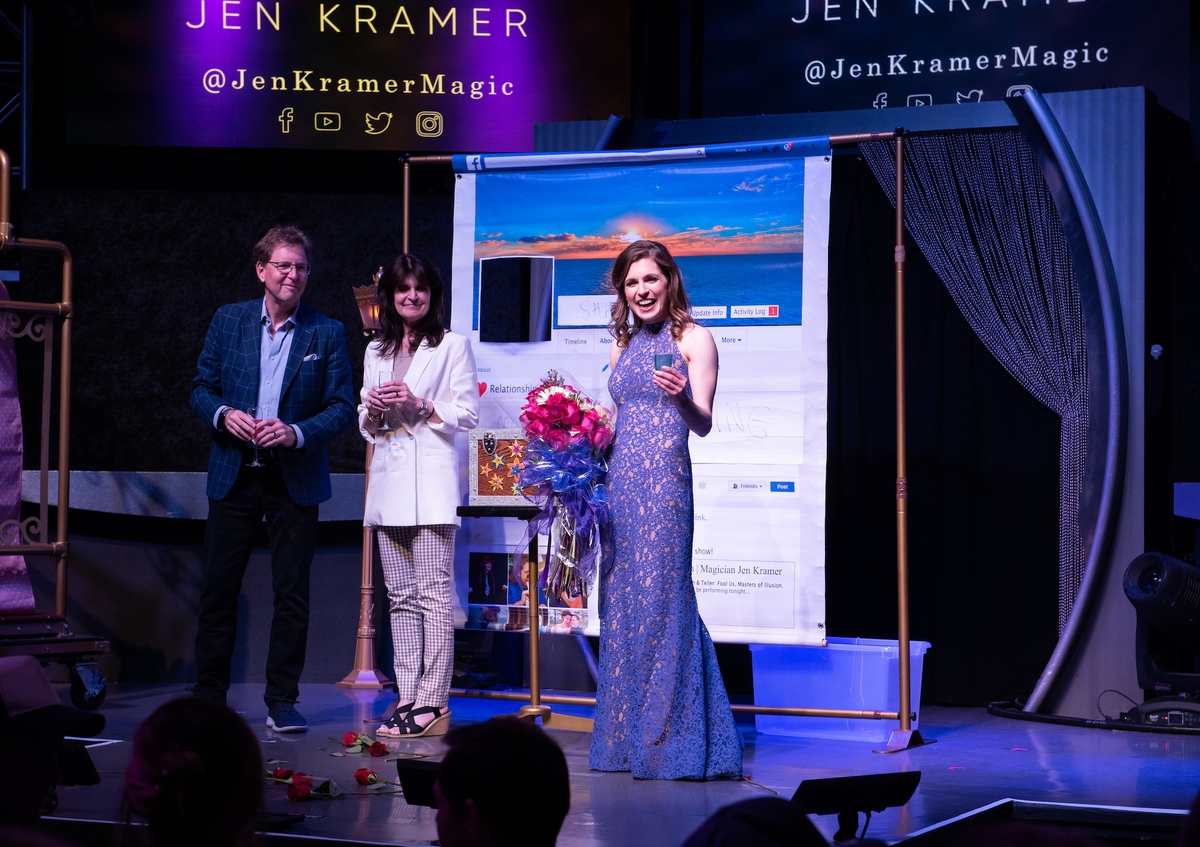 Jen Kramer celebrates her 500th show at Westgate Las Vegas, joined onstage by her parents, on June 24 at the Westgate Cabaret.

With many members of her family in the audience at the intimate Westgate Cabaret — including the uncle that gifted her a book about card tricks when she was 10 ten years old, sparking an interest in magic — Jen Kramer performed her 500th show in Las Vegas on Friday, dazzling the friendly crowd with sleight of hand, charmingly corny jokes and a smile that never went away. And she did it all one day before her 30th birthday.

Kramer, who made her Vegas debut headlining at this venue in 2018, is the only female magician with her own show in town right now, and during a Champagne toast after Friday’s performance, Westgate Vice President of Public Relations Gordon Prouty said Kramer has now performed more shows than any other headlining female magician in history.

In a conversation last week before the celebration, in a much quieter version of the Cabaret room, Kramer said the show has been an overwhelmingly rewarding experience.

“There’s so many things going through my mind,” she said of reaching the 500-show milestone. “There are the memories made with the audience and the awesome team I get the privilege to work with at Westgate. Ultimately for me, magic is all about connecting with people, that genuine human connection, and I’m so grateful to have the opportunity to do this thing I love so much and get to connect with people through magic.”

She focuses on that connection throughout the show, whether it’s coaxing sometimes shy younger audience members into participating or sharing stories from her past, like a college trip to India to perform for children through Magicians Without Borders.

Kramer’s illusions present her own personal take on classic card magic and mental feats, and there’s rarely a moment during the 90-minute performance that doesn’t involve interaction with the audience.

“I like to think of the show as a continually evolving thing, and while I’m proud of what I’ve created so far, I want to keep beating my own best, keep improving,” she said. “It’s amazing how a tiny change in the way you say something can make a real difference in the audience reaction. Sometimes I’ll add an entirely new routine, so there are some parts that are totally new from when it first opened, but there have been lots of smaller tweaks as well. It’s been an exciting process and a fun, creative challenge.”

Reopening the show after the pandemic pause brought other interesting challenges, as Kramer had to find a way to keep the audience engaged and actively participating in the show without joining her onstage or physically handling objects. Some of her solutions are still in the show today, like the game show sequence where an audience member gets to pick a potential prize behind one of three doors. It’s one of the most popular parts of the show.

Like some of the other afternoon magic shows on and around the Las Vegas Strip, Kramer’s production is built for all ages and extremely family-friendly. There doesn’t appear to be enough Vegas shows to meet the current demand for that genre of entertainment, especially considering we’re in the summer months and the city is seeing increasing international tourism traffic.

“It’s not just a kids’ show, it’s perfectly appropriate for kids and adults, and to me it’s just great to see families at the show,” she said. “It really does remind me of the first magic shows I saw and what that meant to me when I was a kid, developing an interest in magic. I’ll see [multiple] generations coming together, and sometimes I’ll get to gather after the show and talk magic with a group of young aspiring magicians. That’s just so much fun and so rewarding.”

“The Magic of Jen Kramer” runs at 5:30 p.m. Friday and at 3 p.m. Saturday and Sunday at the Westgate Cabaret at Westgate Las Vegas, and tickets are available through Ticketmaster.

Lombardo must explain stance on abortion