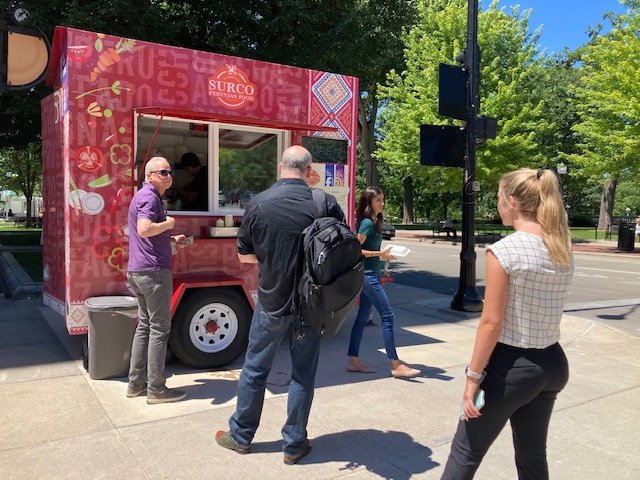 A beautiful June day with temps in the mid-80s used to mean downtown offices emptied out at the noon hour and the Capitol Square was crowded with people enjoying the weather, eating lunch outside. It wasn’t uncommon to see eight to 10 food carts, lined up along Main Street and scattered at the other corners. Even Martin Luther King Jr. Boulevard usually hosted a popular popcorn cart.

The last couple of Wednesdays were both beautiful summer days — not even the mosquitoes were biting — and the Square was populated, but not really abuzz. Clearly the office work force has still not come back with a full contingent of workers.

On both days, three carts — El Burrito Loco, Surco Peruvian and Common Pasta — were clustered near the intersection of Main Street and MLK. Shortly after noon, each had a line of seven or eight customers — about what you would see pre-pandemic, except that there would have been more carts with similar lines.

Jon Rosnow, cooking in his Common Pasta cart parked near Starbucks on East Main Street, says that when he first took the cart out in April, things were “pretty quiet,” but May brought a steady increase in lunchtime traffic. Since the beginning of June, though, he says the number of customers “seems to have leveled out.”

Common Pasta is at its spot regularly during the lunch hour. When building a customer base, “the biggest thing is consistency,” says Rosnow. “If people know to expect you, they will consistently show up.”

A new cart from Monsoon Siam, the brick and mortar Thai restaurant on Atwood Avenue, is doing a brisk business after about four weeks on the mall. Most of the carts on the mall have lines from two to eight people, with the usual larger crowd at Natural Juice for the avocado spring rolls (which have doubled in price from their pre-pandemic $4, to $8).

At the southwest campus vending area in front of Weeks Hall (the Geology museum) at 1215 W. Dayton St., the El Wiscorican cart is almost out of food around 1:15 p.m. on June 22. Owner Luis Carmona says he has about enough food left to serve three more sandwiches. El Wiscorican is the only cart that’s been vending regularly at this cart site on West Dayton Street.

The return of students to on-campus learning brought business back during the semester, says Carmona, but with many university staffers still working from home, “restaurants are struggling,” he adds. Carmona says that during the summer when most students are gone, it’s faculty and staff who sustain the economy in the area near Union South.

Eric Melton-White, street vending monitor for the city, confirms there are “still many workplaces with hybridized staff schedules, including ours.”

The Square’s weekday population is still not back to normal, but up to six food carts have been coming to the Square weekdays, says Melton-White — Braisin’ Hussies, Capital Takeout and Sabor Regio (Northern Mexican food, from a cart from Sauk City), in addition to Common Pasta, Surco and El Burrito Loco.

At Library Mall, there are more students around campus than there are office workers on the Square, says Melton-White. “I have seen large numbers of people out and longer lines at carts at the mall.” Melton-White notes that it’s not just foot traffic affecting carts, it’s shortage of staff, and that some carts are either focusing on their brick and mortar restaurants or taking time off.

The city has also brought back the Carts In Parks program, which started last year, says Melton-White, and participation has increased.

Jaime and Jason Whyte operate the cart Propa Jerk & BBQ and have been vending at parks through the Carts in Parks program. They launched their food cart last year and Jaime Whyte says that “this year is a whole different ball game. There are way more events than last year.” Propa Jerk has been vending at Olbrich Park near the beer garden, in Brittingham Park near Brittingham Boats, and at North Star Park on the city’s far east side.

When they want to take Propa Jerk out to vend, Whyte calls up an app for carts in the Carts in Parks program and scrolls through parks; the app shows if there are sites for vending available on a specific date. She can also pick up a shift fairly late — a recent cancellation of an event due to a thunderstorm meant the Propa Jerk cart had a lot of food on hand that needed to be used, and Carts in Parks offered an easy way to choose from several options.

“There are plenty of options I’m turning down,” says Whyte, who manages the business end of the cart and also works as a nurse, while her husband cooks. The cart serves Jamaican fare like jerk chicken, red beans and rice, curry chicken, coconut curry shrimp and jerk pulled pork.

With more carts vending away from the Square and the Library Mall these days, it’s more difficult to know which carts are going to be where at any given time — unless you’re following a specific cart on Facebook or Instagram.

“That’s about the only way I know of,” Whyte says.