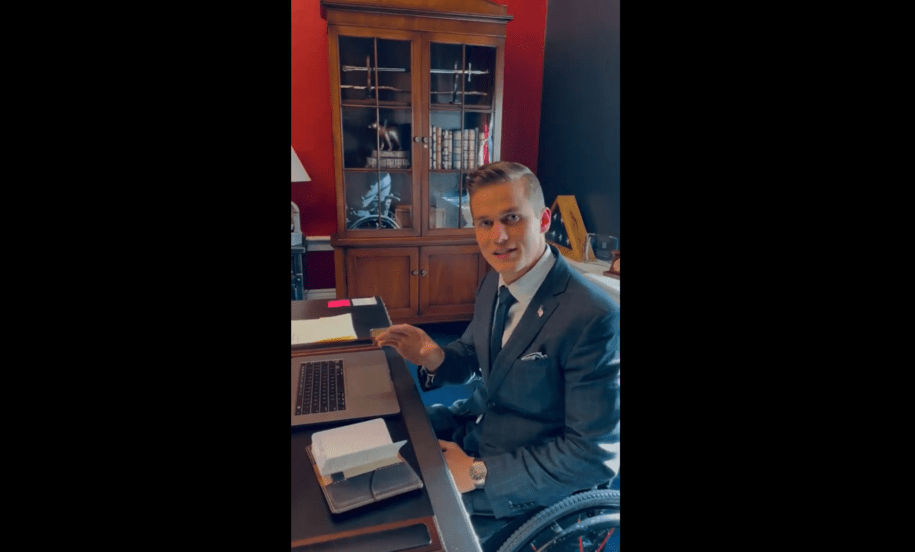 In the video, Cawthorn sits behind his House office desk, purporting to have his Twitter account open on a laptop screen in front of him. He tells the audience that he’s in his office in Washington, D.C., and he’s on his “official twitter, sanctioned by the government, that allows me to have it.” (I have a Twitter account too! Mine is sanctioned by me and I’m allowed to have it!) Cawthorn then proceeded to make a run for immigration racism, saying that “we have extraordinary weak leadership along the southern border.” Blah bah blah something about immigrants coming into our country and stealing your children’s futures, etc. Besides the fact that the majority of our southern border is made up of real estate under Republican governors, I’m not sure exactly what Cawthorn thinks he’s saying. Either way, it’s GOP racist rhetoric, and lying is clearly something that Cawthorn feels most at home doing.

Cawthorn then says he wants to praise Texas Republican Gov. Abbott for sending his state’s national guard down to “protect” the border—as opposed to helping out all of those Texans who were damaged by his lack of leadership during the winter electrical grid failure. He then says how great this terrible Texas governor is. Then, Cawthorn says that Twitter keeps giving him a prompt that says “something went wrong,” and Cawthorn claims this is the third time they have tried to send this tweet. He ends by accusing “big tech” of being “pro illegal immigration” and “censorship.”

It is important to note here that Cawthorn is not holding the phone that is recording this. That means there is at least one other person who thought that recording this and tweeting it out was not contradictory at all. This means that on top of Cawthorn being as smart as a rock, his team of people are also of gravel-level intelligence. And the rock I’m thinking about is a super not-smart rock. Unless they are smarter than I given them, meaning as smart as astroturf or something, which makes them so heinously cynical it is hard to imagine that kind of worldview.