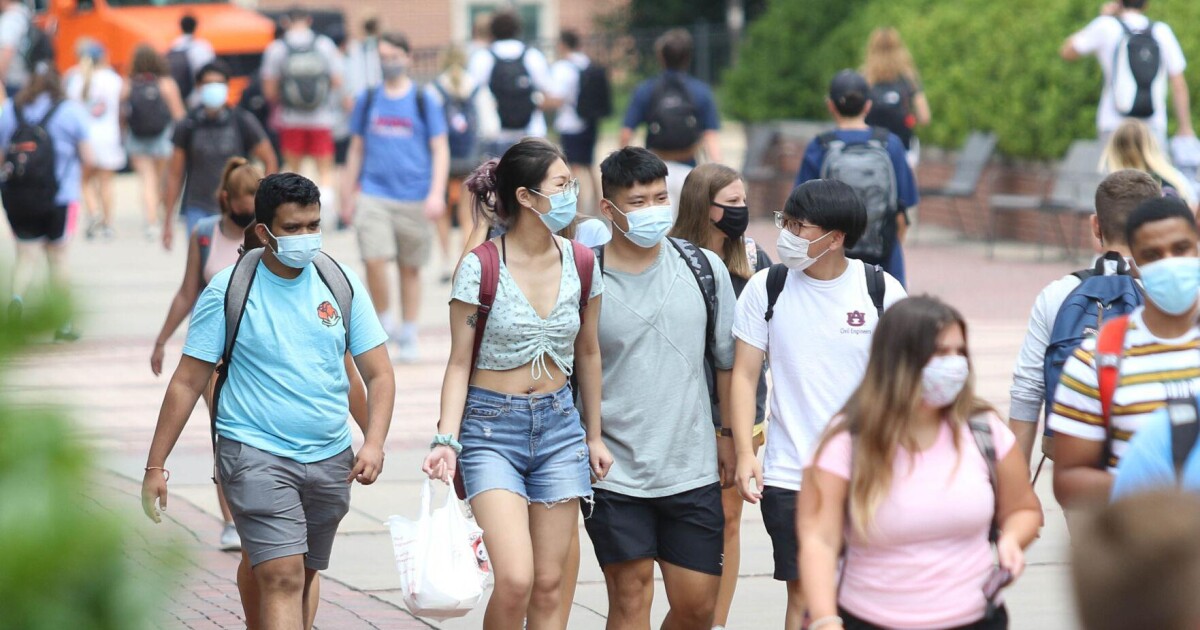 Lower-ranked instructors bear a disproportionate share of the risk of Covid-19 exposure while teaching at Auburn University, where only about half of the classrooms have the capacity to achieve physical distancing in accordance with public-health guidelines, a preliminary study has found.

The unpublished paper, written by two Auburn economics professors and a graduate student, suggests that inequities in the academic labor force have been exacerbated by a hard push for in-person instruction that places contingent faculty members and graduate students in the riskiest teaching environments.

Nonwhite and female instructors at Auburn are more likely to be in classrooms ill suited for physical distancing, according to the research, although those findings were based on an imperfect imputation of race and gender that the economists concede needs more work.

Like colleges across the nation, Auburn paused in-person instruction at the start of the pandemic and resumed some face-to-face classes last fall. With an undergraduate enrollment of about 24,500, Auburn sought to mitigate risk by capping in-person classes at 50 percent of standard classroom capacity. That helped, according to the researchers, increasing by 10 to 15 percentage points the share of classes compliant with social-distancing best practices. Still, it wasn’t enough, according to the analysis.

To assess classroom safety, the researchers scrutinized the university’s own classroom-capacity analysis, which had examined the dimensions of Auburn classrooms to determine the number of students who could fit into a room while maintaining the Centers for Disease Control and Prevention’s recommended six-foot separation between individuals. (Ultimately, the university set a cap on enrollment rather than relying on the studies, according to the researchers.)

The researchers compared the university’s classroom-capacity information with the number of students enrolled in the classes in the fall of 2020 and spring of 2021, categorizing each class as a “Safe Class,” “Risky Class,” or “Very Risky Class.” If a class enrolled fewer students than the CDC-prescribed capacity, the economists considered the class to be “safe.” Classes with enrollments equal to or greater than the CDC-prescribed capacity, but less than twice that cap, were considered “risky.” Classes with enrollments of twice the CDC capacity or more were categorized as “very risky.”

Since Auburn resumed in-person classes, about one in five face-to-face classes have been “very risky,” the researchers determined, and instructors of lower academic rank are more likely to teach those classes than are their senior counterparts.

Across nearly 300 courses taught in person this semester by Auburn instructors, a group of employees who do not have tenure and are contracted to teach individual course sections, 41 percent are “very risky,” according to the paper. By comparison, about 19 percent of courses taught by full professors have similar risk.

The economists cannot say definitively why a greater share of the courses taught by lower-level instructors are of high risk, but they have an intuitive theory: These are people with the least power to complain.

“The big fish — the top administrators, the full professors, the people with power — they seem to be in safer classes,” said Duha T. Altindag, one of the paper’s co-authors. “I don’t think the university assigns riskier classes to instructors or graduate assistants, but I think those lower-ranking people didn’t speak up.” (Altindag, a tenured associate professorof economics, was granted a medical waiver to teach his courses online.)

About 47 of the “risky” or “very risky” classes are taught by graduate teaching assistants, contract instructors, or lecturers, Altindag said. The draft paper does not provide this particular data point, but Altindag calculated it at The Chronicle’s request.

Preston Sparks, a spokesman for Auburn, told The Chronicle in an email that in-person teaching had been identified as the “primary modality” for spring instruction, but that faculty members could request an online option for “personal or pedagogical reasons.” Department chairs accommodated such requests for more than 1,000 course sections, Sparks said.

Faculty members who were denied a request to teach online could appeal to the provost. Two such appeals were made for the spring term, and both were approved, Sparks said.

As for the researchers’ findings, “Auburn leadership has not had an opportunity to review the paper,” Mike Clardy, another university spokesman, wrote in an email to The Chronicle. “The university remains committed to the safety of the campus community and has implemented a number of measures aimed at mitigating the spread of Covid-19 this semester.”

At colleges across the nation, the resumption of in-person instruction has been a source of campus infighting and, in some cases, litigation, as faculty members push back against pressure to get back to the lecterns.

But at Auburn and elsewhere, Covid-driven criticisms can be difficult to separate from garden-variety faculty angst. Some of the most vocal critics of college-reopening plans in higher education are longtime foes of college administrators, who have become easy targets for their approaches to an unprecedented challenge.

R. Alan Seals Jr., another co-author of the paper on classroom safety at Auburn, has been at frequent odds with university leaders. He is involved in a lawsuit against the university that alleges he was stripped of his role as graduate program officer in retaliation for criticizing an academic program that was popular with Auburn athletes.

Seals, who is teaching two in-person classes this semester, said his research is objective and not colored by any antipathy he may have for Auburn administrators. Samuel Cole, a graduate student, is the paper’s third co-author.

Tracy K. Witte, a psychology professor at Auburn, said some people at the university will probably be skeptical of the economists’ research because of Seals’ history of feuding with Auburn leaders. “But every once in a while a troublemaker is making a good point,” Witte said.

Anecdotally, Witte has observed, a lot of professors are teaching in-person classes that are lightly attended. By that measure, Auburn may have been more lucky than smart in its approach to classroom safety, she said. (Auburn reported 12 positive Covid-19 cases last week.)

“The administration deserves some critique or skepticism for certain aspects of the Covid response, even if everything ends up OK,” Witte said. Witte is teaching a graduate course fully online, which she said was the general preference of the class.

Nationally, the pandemic has had an outsize effect on people of color. The Auburn economists identified a similar pattern at the university, where nonwhite instructors appeared to benefit less from the university’s decision to cap classes at 50 percent of normal enrollment.

Such methodology is not uncommon in peer-reviewed articles, Altindag said. (The Chronicle contacted several scholars about the efficacy of the researchers’ approach, but professors unfamiliar with the work were largely reluctant to evaluate it.)

The research, though imperfect, lends credence to misgivings among many in higher education about who is truly assuming the risk when colleges try to return to something close to “normal.”

A tenured professor at Auburn, who asked not to be identified because she feared retribution, said she’d thought about those inequities a lot. By choosing not to teach in person, she said, she has made it more likely that someone with less job security would have to do so instead.

“I knew that graduate students were being asked to step in in place of faculty who were unwilling to go into the classroom,” she said, “and I will probably go to hell for not trying harder to stop it.”