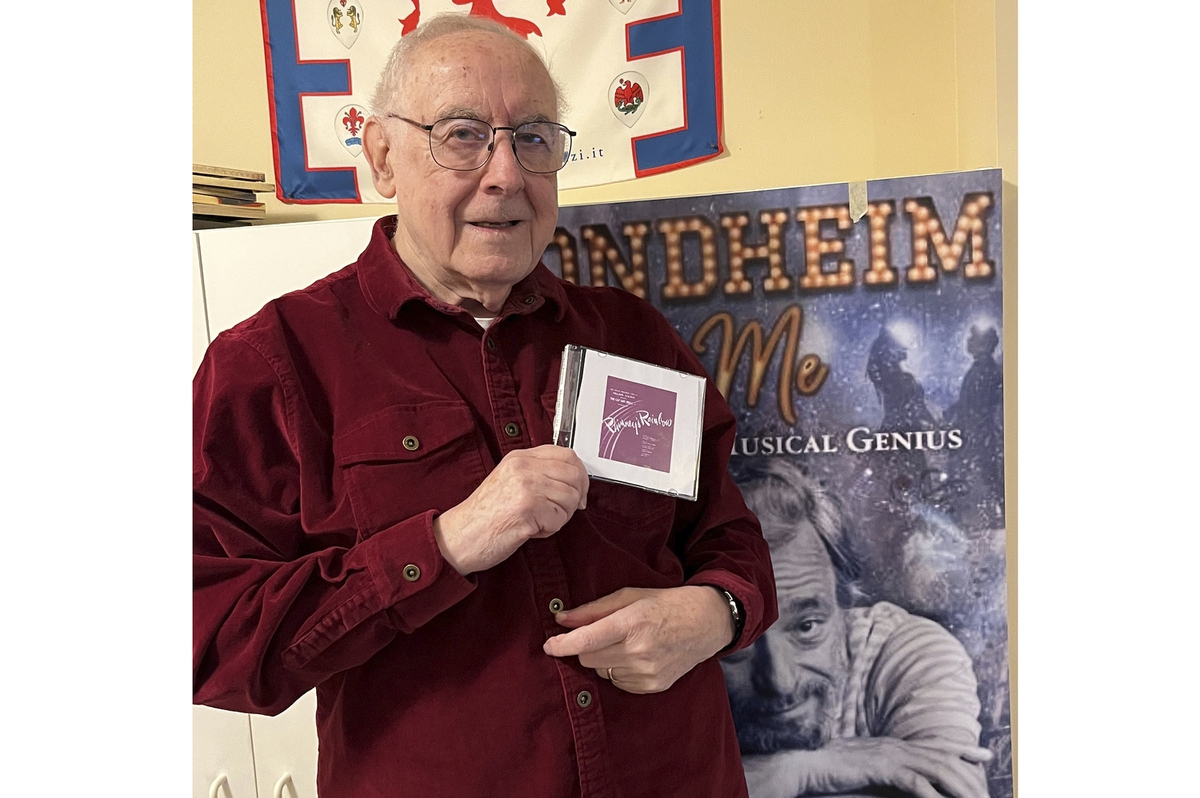 Author and journalist Paul Salsini holds a copy of Stephen Sondheim’s first original cast recording of “Phinney’s Rainbow” in Milwaukee on Dec. 1, 2022. The CD, which was lost, is a recording of the legendary composer’s first student-led musical while he attended Williams College in 1948.

NEW YORK — A copy of what’s being called Stephen Sondheim’s first original cast recording has been found on a misplaced CD, capturing the legendary composer’s budding skills in a student-led musical while at Williams College in 1948.

Sondheim was an 18-year-old sophomore when he wrote the music for “Phinney’s Rainbow,” a show that had just four performances sponsored by Williams’ theatrical organization Cap and Bells.

Paul Salsini, a journalist and the author of the new memoir “Sondheim & Me: Revealing a Musical Genius,” recently found the CD while putting away material he had amassed for his book and realized it contained “Sondheim’s first original cast recording.”

“I played it and I thought, ‘My goodness, this is really rare,’” Salsini, who also founded and edited The Sondheim Review, told The Associated Press from his home in Milwaukee. “It’s a find.”

Salsini suspects Sondheim himself recorded one of the shows on an acetate recorder, noting that his mentor Oscar Hammerstein II had urged him to buy such a device. “I’m 90% sure that Sondheim put this tape recorder next to his piano.”

The show’s title has two playful references — one to “Finian’s Rainbow,” which had recently opened on Broadway, and the other to James Phinney Baxter III, president of Williams.

The show was a satire centered on a school named Swindlehurst Prep, whose students are divided into three types — athletes, wolves and intellectuals. When the president is away, the students go wild. Salsini calls the humor “collegiate.” In one quip, someone says: “The students are revolting.” The reply: “The faculty isn’t so good either.”

Sondheim wrote 25 musical numbers for “Phinney’s Rainbow,” including a dream ballet. The show had a cast of 52 students — all men, since Williams didn’t admit women until 1971. The budget was $1,035.

Salsini’s CD consists of 19 tracks, for a total running time of 1 hour and 20 minutes. Somehow, the disc had gotten misplaced and he couldn’t include it in his book, to his regret. He’s not sure how he got it in the first place. Salsini believes other copies might be out there, although none have been found at the Library of Congress or Williams, in Massachusetts.

The sound quality is pretty poor — with laughing and clapping sometimes overwhelming the lyrics — but the find is thrilling, nonetheless. Many of the songs hint at the musical theater giant to become, like the first act’s “How Do I Know?” with clever wordplay: “And I asked you when/ And you said I would know!/But how will I know/When I know that you said ‘no’?/I just don’t know!”

Salsini points to that song as an early example of a theme that Sondheim would return to often. “That is a precursor for so many of Sondheim’s songs in which he expresses a longing, a longing for love, a longing for affection, that runs through many of his songs in the course of his career.”

Sondheim, who died in 2021, became a giant in musical theater, influencing several generations of songwriters, particularly with such landmark musicals as “Company,” “Follies” and “Sweeney Todd.”

Six of Sondheim’s musicals won Tony Awards for best score, and he also received a Pulitzer Prize (“Sunday in the Park”), an Academy Award (for the song “Sooner or Later” from the film “Dick Tracy”), five Olivier Awards and the Presidential Medal of Honor. In 2008, he received a Tony Award for lifetime achievement.

“Phinney’s Rainbow” gave Sondheim an early professional boost. Cap and Bells signed an agreement with Broadcast Music, Inc. for the rights to publish three songs from the score: “Phinney’s Rainbow,” “How Do I Know?” and “Still Got My Heart.”

Salsini, who earned a journalism degree and a master’s from Marquette University and returned there to teach, plans to donate all his Sondheim material to the school’s research collection, including the CD. It’s open to the public, meaning anyone can hear the music. “This belongs there,” he said.

But Salsini knows Sondheim well enough to suspect how he would react. “He does not like his juvenilia recovered and made public so I don’t think he would like this out there,” he said. “But that’s not my concern. I’m a journalist and this is news.”