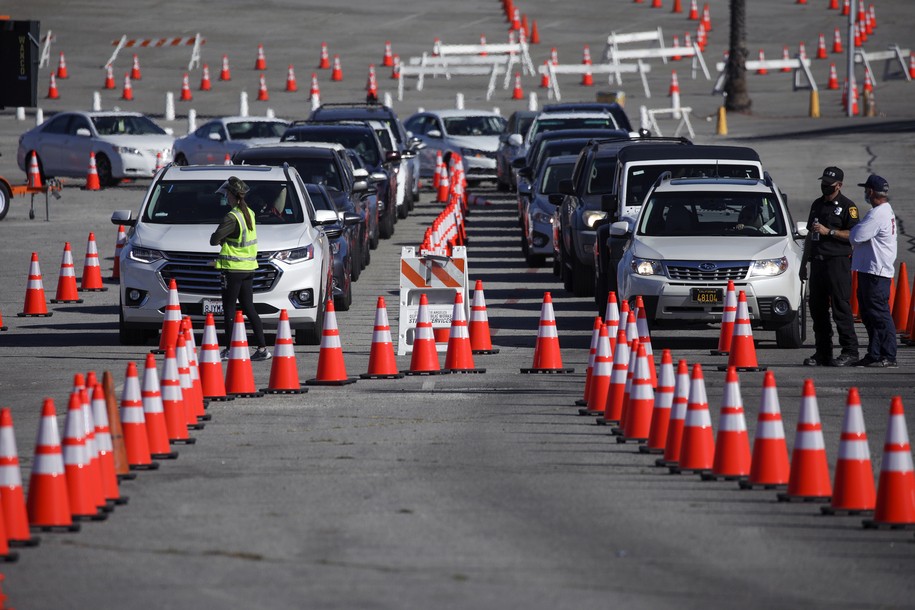 How do we know that it was far-right extremists leading this anti-vaccination group, which resulted in the closure of the site for roughly an hour by on-site officials? Because they left a handy trail of breadcrumbs. The Los Angeles Times reports that in a social media post organizing the event, participants asked to “please refrain from wearing Trump/MAGA attire as we want our statement to resonate with the sheeple. No flags but informational signs only.”

Ah, yes. Very clever. So instead of the usual pro-Trump flags, we were treated to anti-lockdown signs, calls for the state’s Democratic governor to resign, claims that “CNN IS LYING TO YOU,” and the other frequent staples of far-right anti-lockdown rallies around the nation. Oh, and the usual QAnon-isms, as with a sign proclaiming “Tell Bill Gates To Go VACCINATE HIMSELF!”

The site was reopened, and according to the Times all those who had reservations were able to get vaccinated after all. But it’s yet another demonstration of how anti-factual conspiracy nonsense is now a bigger danger to the United States than all terrorists and all hostile nations combined. We came very near to having an entire presidential election undone by an intentionally pursued hoax, these last few months. It is a certainty that hoaxes will continue to undermine this nation’s response to the COVID-19 pandemic, and that millions of Americans will throw themselves at efforts to make sure their neighborhoods are disease hotspots.

The theory that a deadly global pandemic is not real, or at least not consequential, was adapted into conservative orthodoxy purely because it was in the interests of a gaslighting, incompetent Donald Trump to downplay the severity of the virus so that he could justify his own inaction and lack of interest. Conservatives could just as easily have proclaimed that the conservative, family-centric, and God-fearing response to the pandemic should be aggressive measures to save lives even at the price of personal inconvenience, but since the movement is contemptuous of those nodded-at things it did not happen.

I Do What I Want, You Do What I Want is the only conservative mantra that the movement can still rally around. It’s not enough that they do not want to curb virus transmission or to be vaccinated in an effort to reach herd immunity without millions of new deaths. The protesters are infuriated that you might do those things despite them not wanting you to.

Anti-vaccination rhetoric is, of course, not limited to one movement. It is one of the most common anti-science tropes of recent decades, fueled by a collective loss of memory of what life was like before key vaccines were invented and a society-wide distrust of expertise in favor of one weird trick discovered by a mom-styled hucksterism. Facebook and other platforms have turned the usual social silos into something of a pyramid scheme, in which the purveyors of counterfactual gibberish are rewarded with greater and greater support based on the infectiousness of their claims.

This time around, the key mover of these conspiracy claims are the now-metastasized cancer of Trump supporters, whether they are instructed to show up with Dear Leader’s flags or are told to hide them. And the pandemic-denying rhetoric being spouted started out solely as an incompetent and corrupt administration’s defense for doing little to nothing, as nearly half a million Americans died.

For a conservative movement that has spent decades indoctrinating their base with more and more outlandish false claims, on Fox News and in other outlets, it is something of a given that it would end up like this—and that conservatism, itself, would be supplanted by this. The party has relentlessly disposed of anyone not eager to wallow in convenient hoaxes over inconvenient truths; the only adherents left are the people willing to believe that Bill Gates is conspiring with Jewish space-laser operators to limit our freedoms, using the faked deaths of a half-million Americans as cover.