Looking up, and looking ahead. On NASA’s remembrance day, a sign of the future 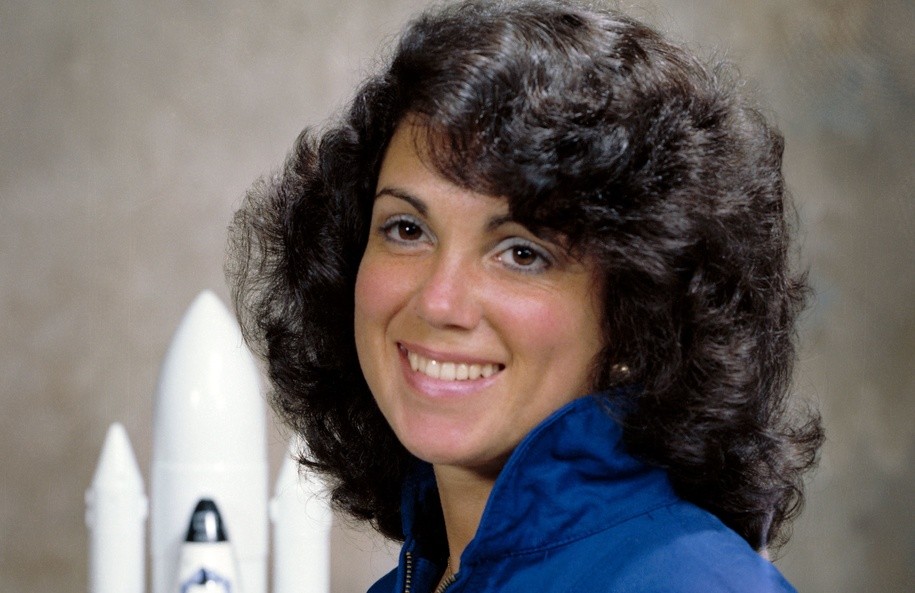 After all these decades, the memory of Christa McAuliffe hangs so heavily over events on Jan. 28, 1986 that it’s sometimes easy to forget that six other astronauts died that awful morning. But coming as it does just one day after Holocaust Remembrance Day, this seems like an appropriate moment to look at the other woman who was on Challenger on Jan. 28, 1986.

Judith Resnik was the first Jewish woman in space. She was a polymath genius who served as an electrical engineer, pilot, software engineer, biomedical engineer, and just about every other possible position. A child prodigy and high school valedictorian, when Resnick entered college in 1966 she was the only woman in the country to receive a perfect score on the SAT. She was one of just 16 women to have done so ever. She was admitted to Carnegie Mellon at 17.

The honors and achievements she piled up would fill a shuttle bay with trophies. She might have done anything. But like so many young people growing up in the wake of Apollo, Judy Resnick wanted to be an astronaut. That’s why, even as she was completing her PhD, she also achieved a near-perfect rating as a professional pilot.

In 1978, she was one of just six women accepted into the astronaut program out of 8,000 applicants. As expected, she excelled at everything. Why she just lost out to Sally Ride when it came to being the first American woman in space is still unclear. One of NASA’s most experienced hands described her as “the astronaut’s astronaut.”

On her 1984 flight on Discovery, Resnick got the chance to use some time on camera to talk to Americans about the benefits of solar power and to advocate for more use of solar technology. She also used that time to hold up a sign that said, “Hi, Dad.”

When the wreckage of Challenger was pulled from the Atlantic, evidence was found that not only had Resnick been alive and awake on the long way down to the sea, she was still working. From the wreckage, it was clear that some time after the explosion, the personal air supplies of just three of the seven crew members had been switched on. One was Resnick’s. Another was that of mission specialist Ellison Onizuka, who was seated beside her. Another was that of pilot Michael Smith, whose supply could only have been switched on by Resnick or Onizuka.

She was just one person. Her loss was inestimable. She deserves to be remembered. So do they all.

And now … that other thing.

It’s extremely easy to dislike Elon Musk. Because he’s made himself extremely dislikable. For a guy who likes to brag that he always considers himself an engineer first, Musk has repeatedly disregarded science when it comes to the global pandemic. He’s both spread disinformation and placed his own workers at risk. Ignoring health regulations to force workers to labor on through a pandemic is far from the first time that Musk has been abusive toward everyone from front-line workers to his fellow executives. Musk is very much a mixed bag, and that bag seems to be at least half full of misogyny, ego, and a love of juvenile pranks.

On the other hand, Tesla (a company Musk did not found) has finally made electric cars not just workable, but desirable. That Tesla is now one of the most valuable companies in the world, with a worth many times that of either Ford or GM, is mostly yet another demonstration of just how bizarre the relationship between the stock market and reality can be. But the fact that every major auto manufacturer is now chasing Tesla in the effort to put more electric cars on the road is even more astounding than its stock price.

And when, nine long years after the last Space Shuttle was grounded, astronauts were once again launched into orbit from American soil, they did so on a Falcon 9 rocket from SpaceX—which Musk very much did found. A Falcon 9 flew again in November, carrying a crew of four to the International Space Station. This ended nearly a decade in which Americans could only reach that station one at a time by buying seats on a Russian rocket. Over 100 Falcon 9s have now flown carrying satellites, ISS supplies, and humans.

There’s absolutely no doubt about it: Elon Musk is a bullying jackass. That makes it easy to dismiss what’s happened at both Tesla and SpaceX as the playthings of an already ridiculously rich guy who indulged his whims while making himself the richest (or second richest) person on the planet. Everyone who cares about the future wishes that was not the case. Everyone would love to see some Sagan-esque visionary generating these technological advances while inspiring the world toward a broader understanding of both technology and the environment. Judy Resnick would be only 71 today, damn it. She could be driving this moment except for one devastatingly bad decision. In fact, it might be argued that Musk has more in common with the NASA managers who pushed for a launch even though they were aware it was a violation of NASA’s own safety rules.

So when looking at this next item, don’t think of Musk. Instead, think of SpaceX’s 11th employee—Gwynne Shotwell. You may never have heard her name, but Shotwell is the actual president and Chief Operating Officer of SpaceX. She started at the company when it was still housed in a single room in an office building. She now runs the day to day operations of a company that literally spreads not just coast to coast, but off the planet. She’s also an engineer and mathematician who spent a decade doing aerospace research on topics that include spaceship design and risks.

You may never have seen Gwynne Shotwell, but if you’ve ever watched the brilliantly edited video of the first Falcon Heavy launch, that’s her flinging her arms up in triumph as both boosters land safely on their pads. So don’t think of SpaceX as Elon Musk’s toy. Think of it as the company where Gwynne Shotwell is working to keep rockets flying, and keep everyone who rides those rockets safe.

With that in mind, and the knowledge that Shotwell’s expertise explicitly covered ways in which rockets can reenter the atmosphere safely, the test flight of “Starship SN8” looks particularly odd. The test is complete with “rapid unplanned disassembly” (i.e., explosion) that comes at the end of a flight and that includes what may be the most ungainly maneuver ever attempted. That’s because Starship is intended to reenter the atmosphere sideways, “belly flop” its way toward the ground, then almost at the last second, flip around, reignite its engines, and settle on the pad.

Why do something that seems so ludicrous? Because if they can pull it off (and it’s still a big if), the change to the nature of space flight could be far more disruptive than everything SpaceX has done before. By taking advantage of the properties of certain alloys of steel, they may be able to create a craft that can launch tons of material into space—or a crew as large as 100 people—for little more than the cost of methane. The same approach allows the ship itself to skip over the use of costly carbon fiber or aerospace-grade aluminum. These are spaceships being built in a tent, largely using techniques that are more commonly employed to put together water tanks. They are so cheap to make that SpaceX is okay with blowing a few up to make progress. They’re so fast to build that there are several more already waiting for the one currently on the pad to get out of the way.

SpaceX has already drastically lowered the cost of space flight with their reusable boosters. But if Starship (and it’s “Super Heavy” booster) actually work, that cost could go down a hundred-fold. It’s hard to express what kind of opportunities that could bring not just to “Occupy Mars!” but in every aspect of space manufacture and exploration. If it works as designed, there is little that is not possible. Really the sheer size of the thing is hard to grasp when watching these things fly. They are big. So big that SpaceX just bought a pair of floating oil derricks to turn into offshore launch platforms, because the noise of a fully equipped Super Heavy/Starship pair is going to be … something. (Side note: This is the part where you have to disregard all those Bond films when learning that a mega billionaire is building two offshore bases that he has dubbed “Phobos” and “Deimos”—also known as “fear” and “dread.”)

Today is the day to remember those who have given their lives in the effort to take humankind into the cosmos. Today is a perfect day to remember Judith Arlene Resnick from Akron, Ohio. It may also be a day when we—all of us, not just Elon—take a step that moves us forward. And up.

To make things extra interesting, there seems to be a last minute snag with the FAA. For reasons that are unclear, the approval to fly Starship today appears to have been pulled, even though SpaceX has already begun fueling for launch. Musk is said to be on phone with FAA, trying to clear things up, but there’s a rocket on the pad that looks to be almost ready to launch.

Unclear what happens next.

Images from cameras a mile or more away show a vehicle that’s venting and appears to be engaged in engine cooldown. This usually signals a launch not so far away. SpaceX may decide to do a static fire or other test, but the straps that usually hold the ship down during such a test have been removed. So … well, this is interesting.

Aviation Week editor Irene Klotz indicates that the FAA was concerned over incomplete information on SpaceX application for clearance. However it appears that some kind of compromise has been reached. SpaceX now cleared to 7,200 feet. However, that may not be high enough to test full flight plan, so what happens now is still unclear.