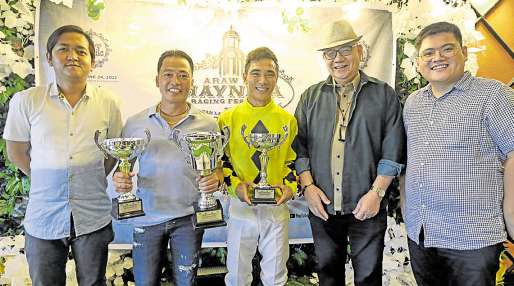 Owned by former Philracom commissioner Jun Sevilla, Time for Glory won the 1,600-meter contest pulling away after launching a bold attack at the clubhouse turn that saw him grab the lead there.

Guided by jockey Jeffril Zarate, the colt then produced another burst of speed to build a six-length lead at the homestretch, finishing in 1:39.4 to bag the P300,000 top purse.

“The front-runners were strong but [Time for Glory’s] ability was there,” said Zarate, who earlier steered Boss Emong to resounding victory in the Gran Copa de Manila Cup—the highlight of the “Araw ng Maynila Racing Festival.”

Time for Glory’s victory turned out to be the biggest reversal of the day as the progeny of Not This Time and Glorified came out of nowhere to stun favorite Darleb, second pick Shastaloo and other horses who got more sales like Super Ninja, Crowded Trade and coupled entry Truly Ponti and Dragon Butterfly.

Shastaloo finished a distant second worth P112,500 for her connections followed by Super Ninja (P62,500), and Truly Ponti (P25,000). Dragon Butterfly, Crowded Trade and Darleb ended up at fifth, sixth and seventh.

The event marked the second time that the Philracom, under the leadership of chair Aurelio “Reli” de Leon, staged the PSA Cup, with this edition drawing almost P1.7 million in total sales.

“Next year we will also stage the PSA Cup in the same racing day of the Gran Copa de Manila to guarantee [its] success,” said De Leon. “I really pushed for the revival of the Gran Copa because this event is loved by bayang karerista.”