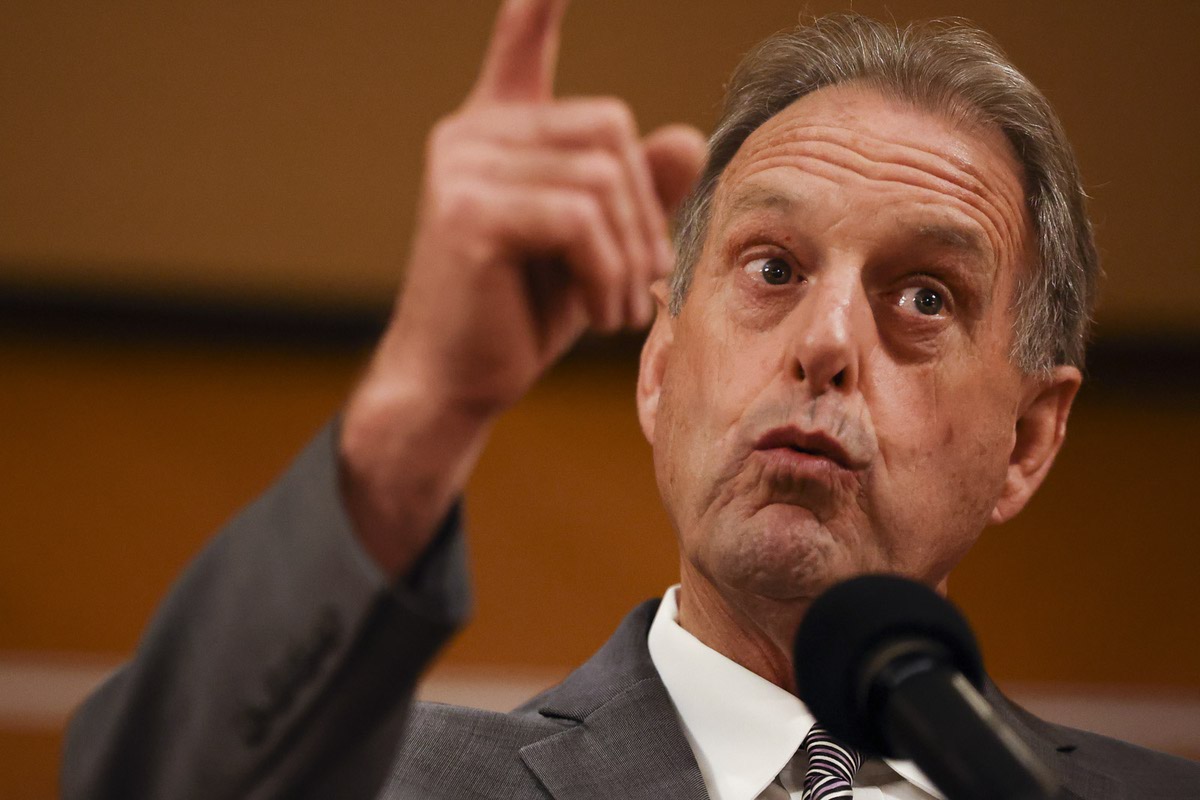 Lombardo has an endorsement from former President Donald Trump and has the most cash on hand among the GOP field, raising $825,00 during the initial three months of 2022 and with a bankroll of nearly $3 million.

Lombardo also leads in all polls, with Reno attorney Joe Gilbert — who received an endorsement from the Nevada Republican Party — in second.

But the dozen or so other candidates vying for the nomination have shown no indication of dropping out of the race. On the contrary, the candidates seem to be doubling down and remaining confident they’ll win.

Former U.S. Sen. Dean Heller came out with a new ad last week touting his Second Amendment bona fides; North Las Vegas Mayor John Lee campaigned at a GOP barbecue in Storey County; and all of the candidate are scheduled to debate at 7 p.m. Wednesday in a telecast hosted by KLAS-TV.

Anything can happen over the next three weeks before the June 14 primary, but it’s unlikely that any of the candidates will drop out, said David Damore, president and chair of the UNLV department of political science. Even if they did, their names would still appear on the ballot.

The reasons why people stay in races they know they’re going to lose are myriad, Damore said. Pride is a factor, he said, but they may also stick around to advertise a business, increase name recognition for future campaign runs, or to advocate for an issue or priority in hopes of moving the party to the left or the right.

Candidates in the past have also dropped out and endorsed another person in the race. In a primary where voter turnout is low, a late shift by a few thousand voters can have big effects on outcomes, Damore said, but it probably wouldn’t in Nevada’s GOP gubernatorial primary.

If Heller, for instance, threw in the towel and put his support behind another nonfrontrunner, his message would have to be communicated to his supporters, who would decide whether to oblige his wishes.

That’s not an easy task for a candidate who has been unable to break through during the primary season, Damore said. The benefits would have to be weighed against alienating the candidate likely to win, he said.

By having a lot of candidates in a primary, the winner can secure the nomination with less than 50% of the vote, Damore said, which could create the perception that voters more faithful to the party wanted another candidate compared to the winner.

Whoever wins the Republican nomination for governor will need to mend intraparty fences and try to unify Republicans for the general election, Damore said.

Gov. Steve Sisolak’s administration came under fire last week after ProPublica and the Nevada Independent co-published a story on a Chicago-based COVID-19 testing facility that missed 96% of positive cases and was hastily approved by the state despite not having proper licensing.

ProPublic’s investigation found that the company, Northshore Clinical Labs, used political connections to fast-track its state laboratory license application and secure agreements with five government entities. The company contracted with a son of a close friend to Sisolak.

“This bombshell report clearly shows the Sisolak administration pressured the licensing bureau to rush approval for a COVID testing company that missed 96% of cases — no doubt causing more COVID cases and more deaths,” said RGA spokeswoman Maddie Anderson in a statement. “Instead of deflecting blame, Sisolak must immediately apologize and launch an investigation into why his office was using its political power to pressure a state agency.”

Lombardo said in a statement to the Sun that Nevadans deserved a complete investigation and full accountability from Sisolak.

“While Steve Sisolak was ruining Nevadans’ lives and livelihoods in the name of ‘public health,’ Sisolak fast-tracked a donor’s COVID testing company that missed 96% of positive COVID cases,” Lombardo said in a statement. “Sisolak’s friends made millions and we paid the price.”

“This is a clear abuse of power,” Black tweeted. “Nevadans deserve better.”

But Sisolak’s office said in a statement that it opened an investigation and took action to suspend the company’s PCR testing the first day it was made aware of the issues.

“We believe Nevada was the first state where Northshore operations were suspended due to the state’s inquiries into the reported deficiencies,” the statement says. “That ultimately led to them shutting their operation down just days after the investigation was made public.”

The office said Sisolak never had any conversations with his friend or his child about Northshore or any of its operations.

The letter, known as Request for Additional Information (RFAI), includes a list of 28 individuals that appeared to have donated too much to her reelection campaign.

An individual cannot make a donation to a candidate for federal office larger than $2,900 per election, the letter says, and a qualified multicandidate committee can donate no more than $5,000 per election.

The campaign must respond by June 21. If any contributions exceed the limits, the campaign may have to refund the excessive amounts, the letter says.

RFAIs are frequently sent to campaign committees, as thousands have been given to House and Senate campaigns during this cycle alone. In February, one was also sent to campaign of Adam Laxalt, who is vying for the Republican nomination to face Cortez Masto in the general election.

On Tuesday, Sen. Jacky Rosen, D-Nev.,, a member of the Senate Health, Education, Labor and Pensions Committee, co-introduced the Physicians for Underserved Areas Act aiming to address the nationwide physician shortage, according to a statement from Rosen’s office.

The legislation will update the Graduate Medical Education slot process following a hospital closure to prioritize sending federally-funded medical residency slots to areas where doctors are most needed.

Nevada ranks 48th nationally in primary care physicians per capita, Rosen said in the statement, and “this shortage has had a dire impact on Nevadans’ ability to seek health care.”

“This bipartisan legislation will help add to the number of medical residency slots available for Nevada hospitals and encourage more doctors to come practice in our state, including in communities which previously have been underserved,” she said in the statement.

On Monday, Rep. Dina Titus, D-Nev., introduced the Planning for Animal Wellness (PAW) Act, which would direct the administrator of the Federal Emergency Management Agency to establish an advisory group of experts who would make sure FEMA’s guidance aligns with the best practices in animal care for disaster preparedness, response and recovery.

The act would build upon the Providing Responsible Emergency Plans for Animals at Risk of Emerging Disasters Act that Titus introduced in 2021 and would require entities like zoos and research facilities that are regulated under the Animal Welfare Act to have contingency plans in place to safely evacuate and care for animals in disaster situations.

Last week, Cortez Masto joined 18 other senators in signing a letter to the Senate Committee on Indian Affairs leadership requesting that it hold a hearing as soon as possible on the Truth and Healing Commission on Indian Boarding School Policies in the United States Act, which would build on Interior Secretary Deb Haaland’s steps to establish a formal commission to investigate the past injustices that occurred at government-run Indian boarding schools.

“This bill would establish a formal commission to investigate, document, and acknowledge past injustices of the federal government’s Indian boarding school policies, including attempts to terminate Native cultures, religions, and languages; assimilation practices; and human rights violations,” the senators wrote.

The North Las Vegas Alliance of Concerned Citizens has a candidate meet-and-greet from 6 p.m. to 8 p.m. Tuesday at the Sun City Aliante Community Center. A total of 30 candidates running in 10 different races agreed to participate. The event is free and open to the public.