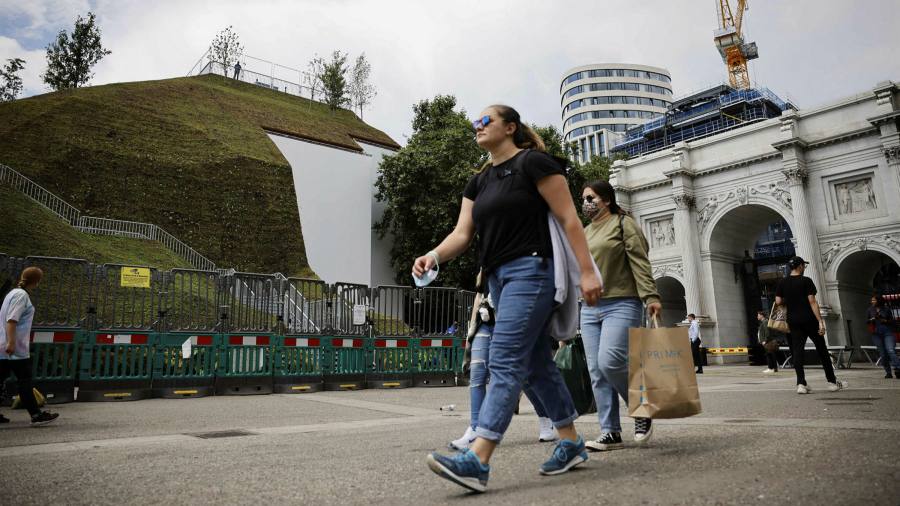 Sign up to myFT Daily Digest to be the first to know about London news.

The deputy leader of a central London council resigned on Friday over the spiralling cost of an artificial mound that was conceived as a way to encourage visitors back to the city centre.

The Marble Arch Mound, a temporary 25m high construction, was closed two days after opening at the end of last month following complaints from visitors over the experience. It has been described as “the worst attraction in London”.

Melvyn Caplan, deputy leader of Westminster council, who was overseeing the project, quit after the mound’s costs more than doubled from £3m to £6.6m. He had served as a Conservative councillor since 1990.

Rachael Robathan, leader of Westminster council, admitted that the attraction “opened too early” and the rise in costs was “totally unacceptable”.

“With regret, I have accepted the resignation of my deputy leader, Melvyn Caplan, who led the mound project. We have also instigated a thorough internal review to understand what went wrong and ensure it never happens again,” she said.

The mound reopened 13 days after it was shut but to encourage visitors tickets will be free for the rest of August and an exhibition space will be constructed. A café will also be opened at the base of the 130 steps.

Robathan added: “Doing nothing was never an option. So when the mound fully reopens in September, I hope that people will come and see it for themselves. The mound may delight or divide views and that’s OK, but we’re confident that in the end it will fulfil its original brief — to get people back into the West End and remind them of why this is a world class city.”

Labour has criticised the project as a “spectacular flop” and called for an independent investigation into how the project went awry.

Adam Hug, the Labour group leader on Westminster council, said: “There are some basic questions that the council needs to answer about what went wrong with its decision making and project management.

“These are questions that must be answered now but Labour believes there needs to be an independent investigation of what happened to ensure this fiasco isn’t repeated,” he added.

The mound was criticised by many of the initial visitors. The publicity promised “soaring views across central London and Hyde Park”, yet the surrounding area remains dominated by a building site. Some visitors have questioned why they were being charged to walk up a fake hill.

Emma Wright, who visited the attraction last month, wrote on Twitter: “Marble arch mound is the worst thing I’ve ever done in London.” Dalia Gebrial, who visited it earlier this month, said “I’m besotted and obsessed with how rubbish it is. It truly is a monument to 2021.”

The council had hoped that 200,000 visitors a day would eventually climb to the top. Instead it is offering refunds to all those who purchased tickets.

The attraction is part of a £150m investment by the council in the shopping district around Oxford Street, which has suffered from reduced footfall since the coronavirus pandemic. A “Westminster Reveals” campaign launches this autumn, including a series of events in galleries and theatres.

The West End Live festival will also return in September, featuring performances in London’s theatre district. The programme aims to “bring the buzz and footfall back to London”, the council said.