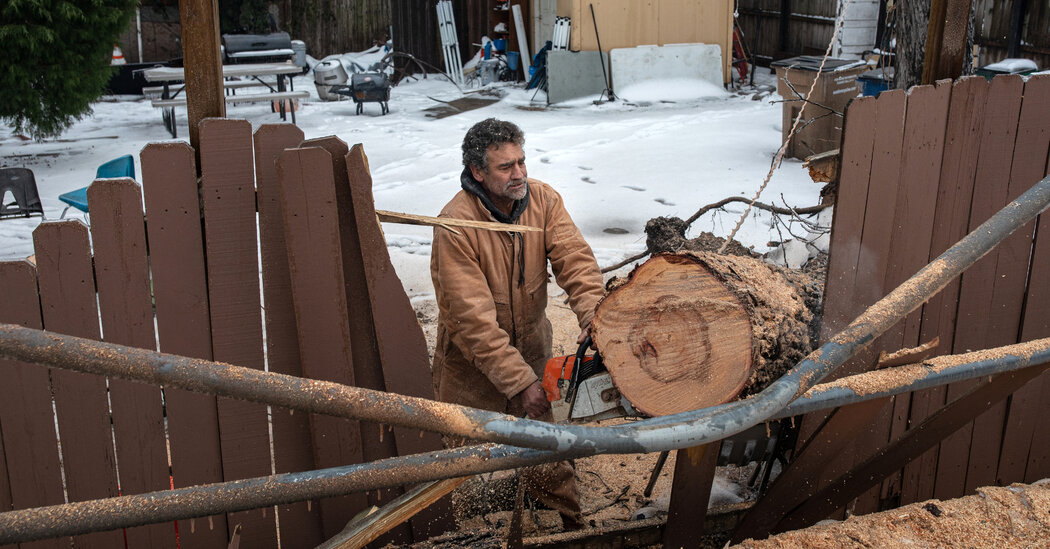 The lack of power and safe water for millions of people in Texas may be compounded on Thursday by a band of foul weather stretching from the Rio Grande to New York.

The National Weather Service said a major winter storm would bring freezing rain, snow and temperatures that were “much below average,” a gut punch for Texans who have resorted to stoves, barbecue grills, gasoline generators and their vehicles to keep themselves warm.

Days of glacial weather have left at least 38 people dead nationwide, made many roads impassable, disrupted vaccine distribution and blanketed nearly three-quarters of the continental United States in snow.

“Most of the state will be below freezing,” Mr. Abbott said in a media briefing on Wednesday, adding that a respite from the cold snap would come only on Saturday.

The storm forced the postponement of a planned trip by President Biden on Thursday to a Pfizer facility in Michigan that produces the coronavirus vaccine.

“It’s going to be a mess,” Laura Pagano, a meteorologist with the National Weather Service, said of the storm, which was expected to extend from the Plains to the Mid-Atlantic and Northeast.

Several inches of snow and sleet were forecast for the Washington area. Duke Energy warned its customers in the Carolinas that there could be a million power outages in the days ahead, and Maryland’s governor, Larry Hogan, gave a similar warning, telling residents to keep their phones charged and to prepare themselves for the coming snow and ice.

Several inches of snow were expected in the New York City area, where Mayor Bill de Blasio said on Wednesday that the weather had delayed shipments of coronavirus vaccine doses and prevented officials from scheduling more than 30,000 vaccination appointments, complicating a rollout already constrained by a limited supply of doses.

But the loss of power was perhaps the most brutal consequence of the storm. Early Thursday at least one million customers nationwide were without power, the overwhelming majority of them in Texas, according to Bluefire Studios, a company that tracks outages.

Crucial infrastructure in Texas was failing even as the state’s grid operator, the Electric Reliability Council of Texas, said power had been restored to 1.6 million households on Wednesday.

Water has also emerged as a major problem, with almost seven million Texans, including the cities of Arlington, Austin and Houston, advised to boil their water for safety. About 263,000 people were affected by nonfunctioning water providers.

Hospital officials at St. David’s South Austin Medical Center scrambled on Wednesday night to fix a heating system that was failing because of low water pressure. They were forced to seek portable toilets and distribute bottles of water to patients and employees so they could wash their hands.

Catherine Saenz and her family, like most of their neighbors in Houston, have had no power or water for days, as the city remains in the grip of the fiercest winter in memory. But they are fortunate: They have a fireplace.

Even fireplaces have to be fed, though, and to keep the two parents, two daughters and two grandmothers from freezing, her husband has spent hours in the afternoon scouring the neighborhood for fallen trees and rotten wood.

“I never imagined that we would be in this situation,” said Ms. Saenz, who grew up in Colombia but has lived in Houston through Hurricanes Ike and Harvey. “No one is prepared, it is dangerous and we are very vulnerable.”

During a news conference on Wednesday, Gov. Greg Abbott of Texas, said, “Every source of power that the state of Texas has has been compromised.”

He signed an executive order directing natural gas providers to halt all shipments of gas outside the state, ordering them to instead direct those sales to Texas power generators.

W. Nim Kidd, chief of the Texas Division of Emergency Management, said several state agencies have been working together to meet the demands of nursing homes, hospitals and dialysis centers, which have reported a variety of problems including water main breaks and oxygen shortages. As another storm moves in, the state increased the number of warming centers to more than 300.

In a sign of just how fundamental the needs are in Texas, the Federal Emergency Management Agency has sent blankets, bottled water and meals, in addition to 60 generators, to help the state power “critical infrastructure” like hospitals. FEMA will also provide the state with diesel fuel “to ensure the continued availability of backup power,” Jen Psaki, the White House press secretary, said at a briefing on Wednesday.

As his state was racked with a huge electricity blackout crisis that left millions of people without heat in frigid temperatures, the governor of Texas took to the television airwaves to start placing blame.

His main target was renewable energy, suggesting that when wind and solar power failed, it led to a systemwide collapse.

“It just shows that fossil fuel is necessary for the state of Texas as well as other states to make sure we will be able to heat our homes in the winter times and cool our homes in the summer times,” said Gov. Greg Abbott, speaking on Sean Hannity’s show on Fox News. Other conservative talk-show hosts had already picked up the theme.

However, wind power was not chiefly to blame for the Texas blackouts. The main problem was frigid temperatures that stalled natural gas production, which is responsible for the majority of Texas’ power supply. Wind makes up just a small fraction — 7 percent or so, by some estimates — of the state’s overall mix of power generation

As frigid weather grips the center of the nation, causing widespread power outages, freezing temperatures, slippery roads and weather-related deaths, Mr. Abbott’s voice was among the most prominent in a chorus of political figures this week to quickly assert that green energy sources such as wind and solar were contributing to the blackouts. The talking points, coming largely from conservatives, reinvigorated a long-running campaign to claim that emissions-spewing fossil fuels are too valuable a resource to give up.

The efforts came despite the fact that the burning of fossil fuels — which causes climate change by releasing vast amounts of planet-warming carbon dioxide emissions into the atmosphere — is helping to drive the phenomenon of increasingly dangerous hurricanes and other storms, as well as unusual weather patterns.

In today’s edition of the Morning newsletter, David Leonhardt writes:

To make sense of this week’s cold spell and storms, I spoke with John Schwartz, a Times reporter who focuses on the climate. Our conversation follows.

Question: Let’s start with a simple question on some people’s minds — How do you think about record-low temperatures hammering parts of the U.S. at the same time that we’re experiencing global warming?

John Schwartz: It does sound counterintuitive! Those who deny climate science love to declare that there’s no such thing as climate change whenever the weather turns cold. But weather remains variable, and cold weather in winter still happens, even if the overall warming trend means that winters are getting milder.

Q: And is there any relationship between this week’s storms and climate change? I noticed that the climate scientist Katharine Hayhoe uses the phrase “global weirding.”

John: There’s interesting science that suggests the effects of a warming world have something to do with these sudden bursts of Arctic cold, as well. The cold air at the top of the world, the polar vortex, is usually held in place by the circulating jet stream. The Northern Hemisphere’s warming appears to be weakening the jet stream, and when sudden blasts of heat in the stratosphere punch into the vortex, that Arctic air can spill down into the middle latitudes.

Q: Are there any other changing patterns of winter weather that may be connected to climate change?

John: A warming atmosphere can hold more moisture, so when you do get storms you can expect to see heavier rain and snow. There’s also fascinating research that links a warming Arctic to increased frequency of the broad range of extreme winter weather in parts of the United States. It’s known as “warm-Arctic/cold-continents pattern,” a phenomenon that’s still being studied.

Q: What are the recent weather trends — during winter or not — where the evidence most strongly suggests climate change is playing a role?

John: In the United States, we’re seeing longer wildfire seasons because of hotter, drier conditions, and our hurricanes are becoming more destructive in several ways, including flooding and storm surge. It’s even worsening the misery of pollen season. We’ve always had floods, fires and storms, but climate change adds oomph to many weather events.

I realize I’m repeating myself here, but scientists are still hashing out all of this. While the science underlying the links between human emissions and climate change is rock solid, some of the particulars, such as whether climate change will cause us to see more frequent blasts from the polar vortex, are still being debated. And that’s as it should be.

For more: Bill Gates tells The Times that “‘Weather for Dummies’ is probably the best book written for a general audience” about the relationship between climate change and the weather.

Winter storm warnings and advisories are in place for parts of New York, New Jersey and Connecticut from Thursday morning through Friday night, with several inches of snow expected in New York City and on Long Island, said Jay Engle, a meteorologist with the National Weather Service.

Recent storms buried the city in snow, but Mr. Engle described the coming weather as “not as intense, but enough to make travel difficult.”

Winds will be moderate, reaching 25 miles per hour on Thursday night. Three to five inches of snow was expected across the five boroughs and Long Island through Thursday, with total amounts reaching up to eight inches by Friday, according to the Weather Service.

Parts of upstate New York will see only a few inches of snow: Albany may receive up to three inches and Poughkeepsie six inches, the service said.

Travel conditions across these areas were expected to be hazardous into Friday, the Weather Service said.

Calls grow to evacuate Afghans who helped US troops to Guam