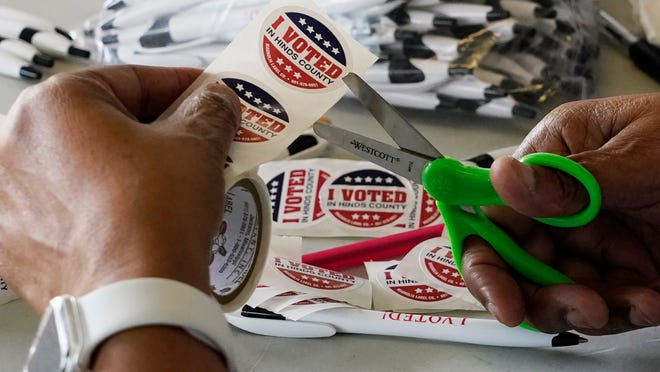 Polls opened at 7 a.m. across Mississippi for the June 7 primary election, which will narrow the fields of candidates for Democratic and Republican candidates for U.S. House of Representatives.

Republican incumbents in Districts 1, 3 and 4 had at least two Republican rivals, and in the case of District 4’s Steven Palazzo, six challengers hoped to unseat the incumbent to move on to the November general election.

Mississippi’s lone Democratic Congressman District 2’s Bennie Thompson faced one Democratic rival. Thompson, who chairs the congressional committee that is investigating the Jan. 6, 2020, events that unfolded in Washington, D.C., is the state’s longest-serving incumbent. He first took office in 1993.

The Clarion Ledger will be reporting from the polls throughout the day so check this story regularly for updates or follow the hashtag #MSElex on Twitter. Check back for results after polls close at 7 p.m.

Reporter Wicker Perlis went to Fire Station 5, a polling place in District 3, on Tuesday afternoon. There were no voters at the precinct. Poll workers told him it’s been slow, but a few voters came on their lunch break. They’re expecting more as people get off work.

Charles Chalfant of Jackson who came into the fire station to find out where he needed to go to vote, said poll workers told him he was the 28th voter of the day.

He said one reason he came was to figure out what district he lived in.

Local issues were on the top of his mind. “The schools, the police, the potholes,” he said.

Voter turnout was low Tuesday morning at Victory Baptist Church on Hoy Road in Madison with only 51 ballots cast as of 11 a.m.

By 1:30 p.m. voting had picked up slightly with 97 of the precinct’s 1,329 registered voters having cast ballots, poll workers said.

“I want to vote for someone who is a true conservative and will vote their convictions,” said Dena McDonald of Madison who was at the precinct to cast her ballot.

A poll worker said they hoped to get 10% of the precincts’ registered voters by the time the polls close at 7 p.m.

Across town at Pilgrim’s Rest Baptist Church in Madison 143 of the precincts’ registered voters had cast ballots by 1:45 p.m.

“It has been a trickle, a slow steady trickle,” a poll worker said.

Voters in Madison’s Congressional District 3 could only vote in the Republican Party primary because only one candidate, Shuwaski Young, is on the Democratic Party ticket.

Young will face the winner of Tuesday’s Republican primary in the general election on Nov. 8.

At the J.T. Biggs Memorial Library in Crystal Springs, 85 people, or just under 4% of the registered voters in that precinct, had voted by noon.

Poll workers there said voting is about average for a congressional primary election.

Of the votes cast, 80 were Democratic and four were Republican.

Walking in wearing a vibrant red sweater and matching earrings, it was clear Paula Hill of Crystal Springs would be the fifth Republican voter of the day.

Hill said she is unhappy with the performance of District 2 Congressman Bennie Thompson, who has been in office since 1993. Hill said she’s ready for change.

“It’s all the poverty,” Hill said. “Bennie Thompson needs to come out.

“We need to go all red, I’m telling you. I’m from the Delta. It’s sad. Those small towns up there are just gone – no industry, no nothing.”

Turnout continues to be slow across the Jackson area. At the Fondren Fire Station, lunchtime had the best traffic of the day, according to poll workers.

But only 83 of the precinct’s 1,009 registered voters cast their ballots through 1 p.m. Of those, all 83 voted in the Democratic primary. No voters came to vote in the Republican primary.

Minnie Dixon of Jackson voted just before 1 p.m. and said there was not one particular political issue that draws her to the polls, said reporter Ross Reily.

“I am voting to put the right person in office, whether it’s this election or the runoff,” Dixon said. “It’s all about who you are and that they are a good person. I always keep a list in my head of people I am going to vote for. I know who they are.”

Voters in Hattiesburg were trickling in to their polling places  Traffic was a little slower than usual, poll workers said.

Voters made their choices on paper ballots and placed them in a machine that records their entry.

Noon: Only 1 voter turns out at Jackson State

Only one of the approximately 2,500 voters registered at the Jackson State University precinct cast a ballot Tuesday morning, reporter Joshua Williams said.

A voter in Long Beach reported on Twitter there were virtually no voters at her precinct when she went to cast her ballot Tuesday morning.

“Long Beach was pretty dead at 8 this morning,” she said. “(There were) two others besides me.”

As of 10 a.m., Sunnybrook Retirement Village had only 18 of the 708 registered voters cast ballots. Only 43 of 3,017 votes at Pilgrim Rest Missionary Baptist Church voted and at Victory Baptist Church on Hoy Road, 51 of 1,329 voters turned out.

Voters trickled in to the Brandon Baptist Church precinct to cast ballots for their candidate of choice in the Mississippi Democratic or Republican candidate for the U.S. House of Representatives, photographer Hannah Mattix reported.

The state has four congressmen representing it in Washington, D.C. Congressional elections are held every two years. Each of the four incumbents are seeking reelection.

Previously:Voting in Mississippi’s congressional races June 7: Who’s running? What do they stand for?

Registered voters in Holmes, Hinds, Rankin and Forrest counties can schedule a ride by calling or texting 662-205-6683.

Masks are required and must cover the face from nose to chin. Masks will be provided for those who do not have one.