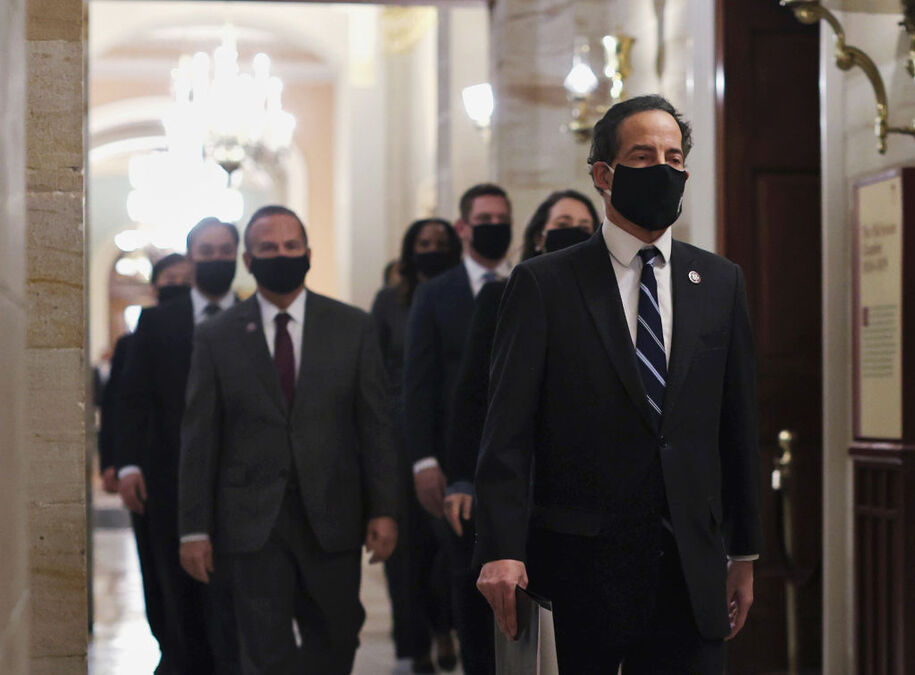 “To protect our democracy and national security—and to deter any future President who would consider provoking violence in pursuit of power—the Senate should convict President Trump and disqualify him from future federal officeholding,” they wrote.

The brief is intended to rebut several arguments Trump’s defense team might employ, including the notion that impeachment would violate Trump’s First Amendment rights or that it would be unconstitutional or simply unnecessary to impeach him now that he is no longer in office.

“The Constitution governs the first day of the President’s term, the last day, and every moment in between. Presidents do not get a free pass to commit high crimes and misdemeanors near the end of their term,” write the impeachment managers. Later, they add, “There is no ‘January Exception’ to impeachment or any other provision of the Constitution.”

Democrats also used the characterizations of prominent Republicans to buttress their case, noting that Wyoming Rep. Liz Cheney said no president had ever committed a “greater betrayal” of their oath to the Constitution and Sen. Mitch McConnell of Kentucky said the mob “was fed lies” and had been “provoked by the president.”

The brief also calls upon the words of the rioters themselves to indict Trump.

Provoked by President Trump’s statements at the rally, many insurrectionists who assaulted the Capitol proudly proclaimed that they were doing President Trump’s bidding. One told police officers that he came as part of a group of “patriots” “at the request of the President.” In a livestreamed video from inside the Capitol, another declared that “[o]ur president wants us here. … We wait and take orders from our president.” Yet another rioter yelled at police officers, “[w]e were invited here … by the President of the United States!”

The brief lays out a timeline demonstrating how long Trump allowed the murderous siege to go on before addressing his supporters and encouraging them to leave the Capitol. Even within that scripted video address, Democrats note, Trump continued his incitement, saying the election was “stolen from us” and telling the violent insurrectionists, “We love you, you’re very special.”

“President Trump’s incitement of insurrection requires his conviction and disqualification from future federal officeholding,” the Democrats conclude. “This is not a case where elections alone are a sufficient safeguard against future abuse; it is the electoral process itself that President Trump attacked and that must be protected from him and anyone else who would seek to mimic his behavior.”

Failure to convict, they add, would only “embolden” future leaders to retain power by any means possible and “suggest that there is not a line a President cannot cross.”

Lawyers for Trump were also expected to file a brief Tuesday that will likely steer clear of Trump’s election fraud claims, according to the New York Times.