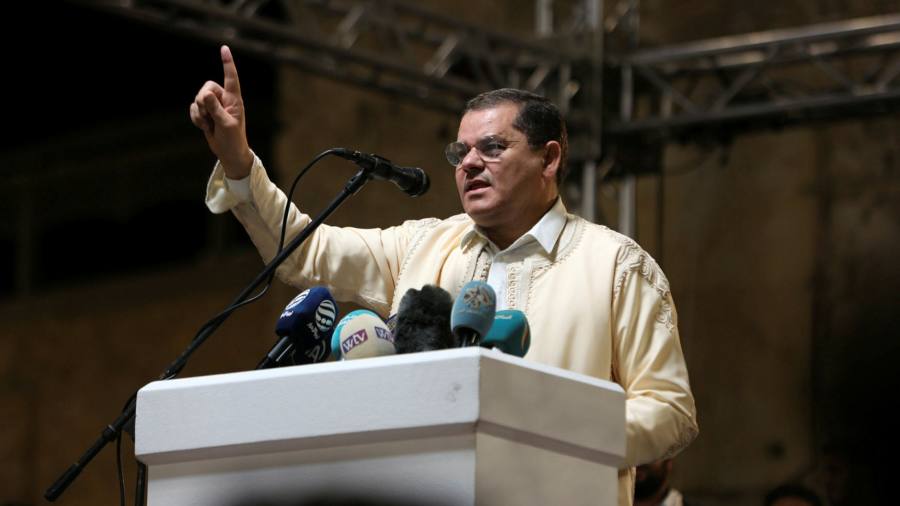 Libya’s oil minister has blamed forces allied to an influential strongman for a wave of closures of oilfields and export terminals that have slashed the country’s oil output almost by half.

In recent days, protesters have blockaded oil facilities in order to pressure Abdul Hamid Dbeibeh, the prime minister, to step down. Libya produces 1.3mn barrels per day and the closures have taken out more than 550,000 b/d of its output this week, equivalent to about 0.5 per cent of global oil supply.

Mohamed Oun, oil minister in Dbeibeh’s government of national unity, told the Financial Times the blockades could not have happened without the co-operation of the Petroleum Facilities guard, which is under the control of Khalifa Haftar. The military strongman controls the east of the country, backs a rival government and has previously tried to capture Tripoli.

“They guard the oil facilities and no one can enter without their permission,” said Oun. “The number of protesters we are seeing in video footage is not enough to shut down oil exports and they have not entered inside the facilities.”

The disruption threatens to add to global concerns about crude supply as EU members mull a ban on imports of Russian oil. Even before Russia’s invasion of Ukraine many traders were forecasting that constrained supply due to under-investment during the coronavirus pandemic would fail to keep pace with surging global demand. Opec members, including Libya, have pledged to replace production cut at the start of the pandemic but generally failed to increase output in line with their monthly targets.

After the invasion, Brent soared to a 14-year high of $140 a barrel as traders weighed the possible loss of Russian oil exports in an already tight market. Prices have since fallen back, in part due to the biggest ever release of oil from the US strategic petroleum reserve, but many analysts expect oil to rally again as anticipated sanctions and a widening customer-driven embargo take more Russian crude off the market.

The Libya blockades represent an escalation of rivalry between two main factions in the country. Haftar supports Fathi Bashagha, a former interior minister who was appointed prime minister in March by the eastern-based parliament after plans to hold elections in December 2021 collapsed amid disputes over who is eligible to run.

Dbeibeh has refused to hand over power to Bashagha, leading to a prolonged stand-off between the two rival prime ministers. He was appointed through a UN-sponsored process last year, but was supposed to remain in office only until the elections.

“At heart, this is a dispute over who can be considered the legitimate government and the process through which state funds are spent,” said Tim Eaton, Libya analyst at Chatham House, the London-based think-tank. “All realise that control of oil revenues is the key to Dbeibeh’s continuing hold on power.”

He said the immediate trigger for the current stand off is the transfer by National Oil Corporation, the state oil company, of $8bn in revenues to the Central Bank in Tripoli under “extreme pressure” from Dbeibeh’s government.

“Receipt of these funds give the Dbeibeh government further breathing room and an ability to hold out in the immediate term,” said Eaton.

In the past decade of turmoil in Libya, the country’s oil sector has often been hostage to power struggles between rival factions, Eaton noted. Stephanie Williams, the UN special adviser on Libya, tweeted on Wednesday about the “need to refrain from the politicisation of oil production, while ensuring effective, transparent management and equitable distribution of affiliated revenues.”