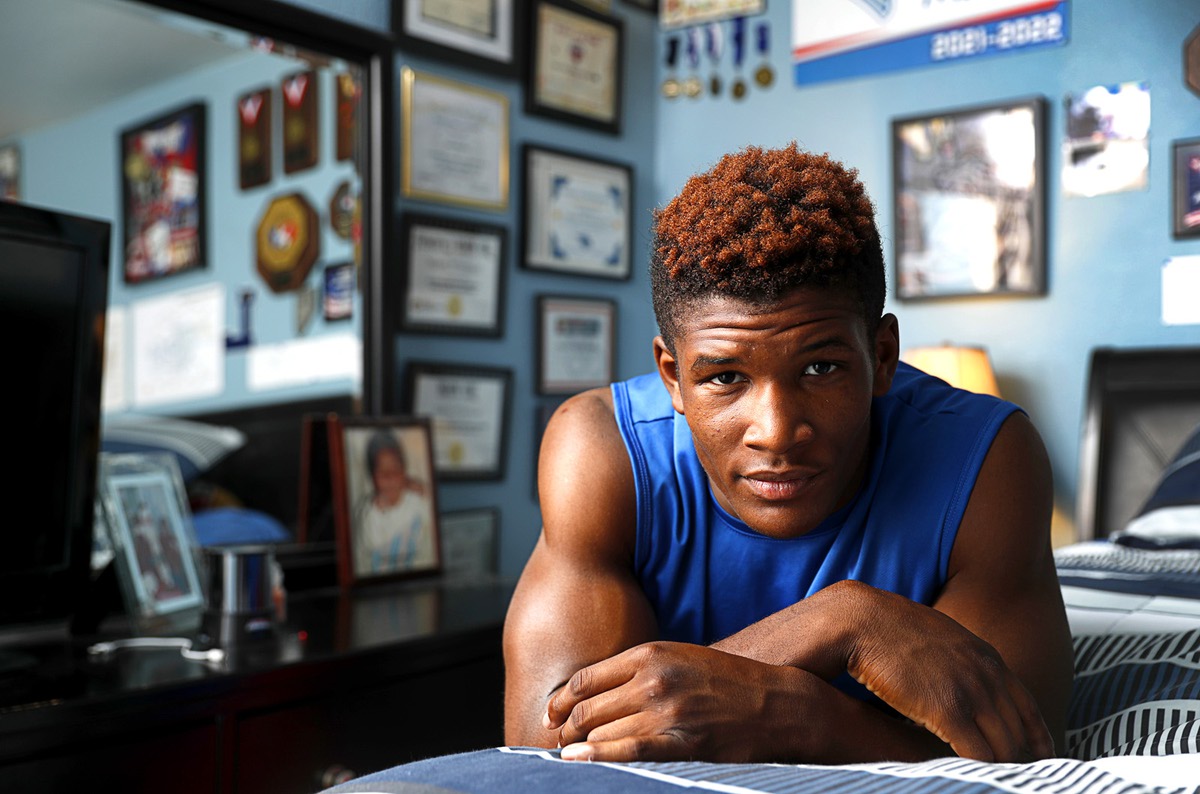 Liberty High School freshman Melvin Whitehead III poses in his bedroom Tuesday, May 17, 2022. Whitehead, a wrestler and football player, works out at 4 a.m. before going to school.

The garage door opens at the Whitehead house in the wee hours in the morning. It’s pitch black at 4 a.m., with moon and the street lights brightening the southeast Henderson neighborhood.

Melvin Whitehead III is determined to get a training session in before classes begin at Liberty High School. His routine — depending on the day — consists of 500 push-ups, 500 pull-ups, jogging around the neighborhood, light weights and more.

For some, the regimen surely seems extreme, especially when it’s replacing a few hours of sleep — a fact not lost on Whitehead or his family. The freshman wrestler credits this dedication to fitness for his athletic prowess, which this winter included a 50-0 record at 195 pounds and a Nevada state championship. Not only did Whitehead go undefeated, 46 of his 50 wins came by pin.

He’s a finalist in the category of Rising Star (the best freshman or sophomore) at tonight’s Sun Standout Awards, the Sun’s annual high school sports awards show, which returns after a two-year hiatus because of the pandemic.

“I never really thought to myself, ‘I am undefeated. I better not lose,’” the 15-year-old Whitehead said. “It was getting ready for the challenge of who I am wrestling next and taking one match at a time. Win or lose, as long as I gave it my best and wrestled to the best of my abilities, that is all that mattered.”

It’s not unheard of for a freshman to win a state wrestling championship, as there have been a handful of four-time state champions in Nevada high school history. But a freshman winning a title at 195 pounds is unheard of, as those athletes are usually upperclassmen who are more physically developed.

That’s where Whitehead’s morning routine is the difference. He only misses the 4 a.m. sessions if he’s on the road for a tournament or for a rest day. He says he never hits the snooze button, and he also follows a strict nutritional diet to maximize his athletic potential, all under the watchful eye of his father.

The end result is one of the most physically-well-put together athletes imaginable for a high school freshman, Whitehead’s physical presence of sheer muscle with virtually no body fat is downright intimidating, Liberty coach Kenneth Porter said. Even at 15, he looks like a grown man.

“That level of dedication and being a self-starter really sets him apart,” Porter said. “He’s just so far ahead of the game because of his physical ability. There’s no other way to say it: The kid is in amazing physical shape.”

Whitehead , who has been wrestling since he was a 7-year-old, also won his weight class at the prestigious Las Vegas Holiday Classic, which attracts national competition, and the 5A Southern Regional title.

When the season ended, he kept wrestling, going 4-0 to win the 2022 Folkstyle National Championships in Colorado Springs, Colo., and 4-1 at the USAW High School National Recruiting Showcase, a 24-wrestler bracket in Iowa featuring a who’s who of the nation’s best. It was his first defeat, even though the opponent was 18 years old and Whitehead had just a small break prior to the match after winning the event’s 16U bracket.

“He beat me, but I put up a fight,” Whitehead said. “I am wrestling against grown men, but I work harder. I know what I have the capability of doing.”

Whitehead is more than a great wrestler, Porter stresses. First and foremost, Whitehead “is a very humble and respectful kid. He’s very encouraging to his teammates and doesn’t take himself too seriously,” his coach said. And like all teenagers, Whitehead can cut loose and have fun with his friends.

That was on display at the state tournament, where Whitehead — who is also part of the Liberty choir — volunteered to sing the national anthem. Those in the gym that day say it was a beautiful rendition, with Whitehead eloquently performing the anthem while standing under the American flag.

“I really wasn’t nervous. I thought of it as another challenge,” Whitehead said.

Whitehead, like most high school freshmen, has his eyes set on many lofty goals. Most days he strives to become the nation’s most accomplished wrestler and see where that takes him — the Olympics or college. Some days, he also envisions himself playing college football —

he participated in a handful of varsity games at defensive end in the fall for Liberty. And, without question, he loves singing too much to stop.

Other finalists in the category include: football’s Micah Alejado, who passed for 2,669 yards and 31 touchdowns with just two interceptions to help Bishop Gorman win the state championship; tennis standout ​Sanjeev Chundu of Clark High School, who didn’t drop a set all season in winning the state title; soccer’s Yuval Cohen, who had 40 goals and 14 assists to help Palo Verde win the class 5A state championship; and basketball’s Dedan Thomas Jr., who averaged 14 points, 5.1 assists and four rebounds per game in leading Liberty basketball to a state championship.

The Sun Standout Awards are modeled after ESPN’s ESPY Awards and honors the top games, moments, teams and players in high school sports in Southern Nevada. Awards include Male and Female Athlete of the Year, Scholar Athlete of the Year and Citizen of the Year.

The event at the South Point Showroom is closed to the public.