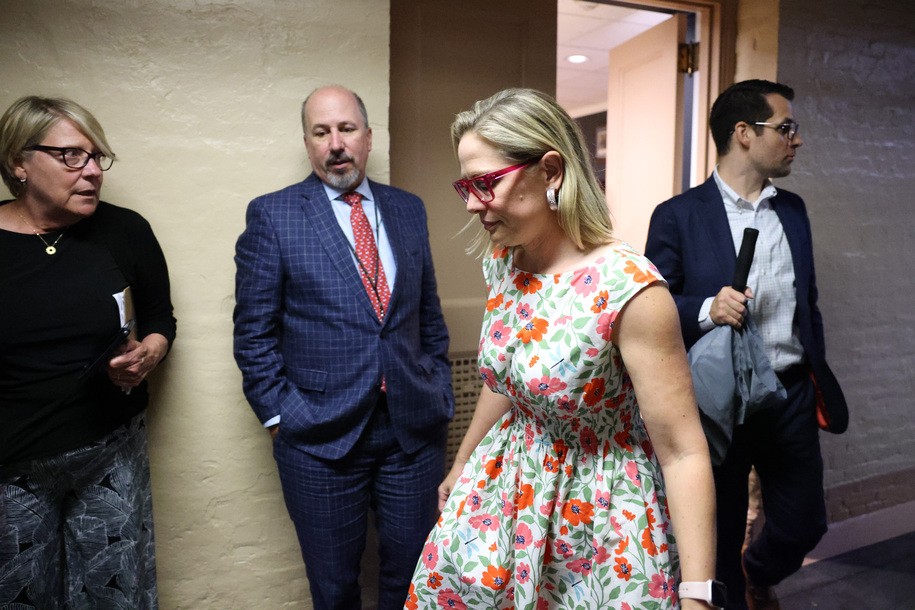 “We have a rare opportunity in this moment in history,” the letter states. “With the support of the President and the majority of Americans for the Equality Act, it is now up to Senate Democrats to end the Jim Crow filibuster and pass this bill securing equality for all LGBTQ2IA+ Americans. As the first openly Bisexual Senator, you should be a champion of queer and transgender rights, and the fact that you oppose filibuster reform in favor of the status quo is deeply concerning.”

Sinema’s opposition was also deeply concerning to a number of Arizonans who protested outside her local office on Tuesday, similarly demanding she change her position on the Jim Crow filibuster. A total of ten people were arrested, tweeted reporter Lorraine Longhi. “Margarita Cuaron is a retired registered nurse who came to @SenatorSinema’s office from Tucson to show her support for #DACA recipients, raising the minimum wage, and preserving democracy,” tweeted The Copper Courier about one demonstrator.

LGBTQ advocates similarly noted that the Jim Crow filibuster continues to stand in the way of the passage of popular legislation, like the Dream and Promise Act. “By casting the decisive vote to end the filibuster, you would open the flood gates of possibility to pass popular reforms supported by the majority of Americans,” the letter states. While the letter thanked her for having been a leading voice for the Equality Act in the past, it also appeared to warn her of potentially supporting a primary challenger should she help sabotage LGBTQ progress.

”We, the below queer community leaders and organizations, thank you for co-sponsoring the Equality Act, and we urge you to take the necessary next step of ending the filibuster so queer and transgender civil rights can pass the Senate and be signed into law by President Biden,” the letter concludes. “If you refuse to do this, we will have no choice but to seriously consider whether our support for you, including financial donations, may better serve our community if directed to another Democrat who will use their power as a US Senator to stand up for our rights.”

That protest outside Sinema’s local office on Tuesday came just hours after she published a widely ridiculed op-ed in The Washington Post where she tried to defend her current stance. “In it she exposes just how unserious she is about this job she has taken on, ignoring history, oblivious to reality, and yet glibly triumphant in declaring principles that are absolute bunk,” Daily Kos’ Joan McCarter wrote. “It mostly boils down to one idea: Democrats shouldn’t pass things because Republicans might rescind them.”