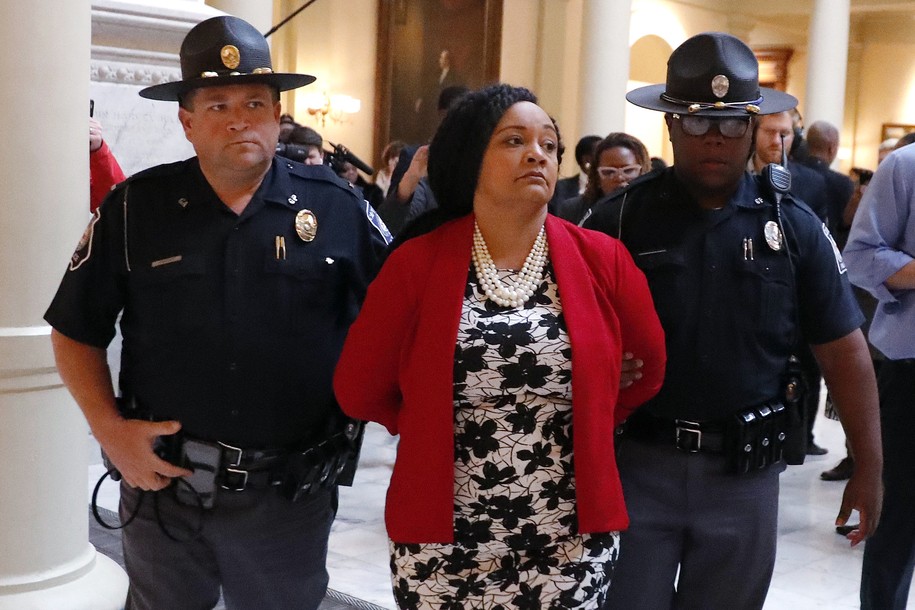 Williams was arrested after she refused to leave the floor during a legislative special session in November 2018. The state law Capitol Police used to justify the arrest bans speech that “may reasonably be expected to prevent or disrupt a session or meeting of the Senate or House of Representatives, a joint session thereof, or any meeting of any standing or interim committee, commission, or caucus of members thereof,” as well as any “loud”or “abusive language” in the state Capitol, the ACLU of Georgia reported.

Williams and other activists filed a federal lawsuit last September arguing both that they did not violate the law by being disruptive and that Capitol police violated the plaintiffs’ constitutional right to free speech. “Plaintiff Senator Nikema Williams was immune from detention at the time of her arrest pursuant to Article III, Section IV, Paragraph IX of the Georgia Constitution, which provides that ‘members of both houses shall be free from arrest during sessions of the General Assembly, or committee meetings thereof, and in going thereto or returning therefrom, except for treason, felony, or breach of the peace,’” the plaintiffs contend in the suit.

The federal court bounced the matter to the Georgia Supreme Court to render its decision on the overarching issue of state law. The state statute applied against Williams and other activists violates both the state constitution and United States Constitution, the ACLU of Georgia argued in its brief filed on behalf of the Asian Americans Advancing Justice-Atlanta, Feminist Women’s Health Center, Georgia Conference of the NAACP, Georgia Equality, Georgia STAND UP, Planned Parenthood Southeast Advocates, and the Southern Poverty Law Center.

In the brief, advocates urged the court to remove “unconstitutionally overbroad” elements of the state law that banned “loud” and “abusive language” in the state Capitol building.

Attorneys stated in the brief:

“The Gold Dome is not a public library. Anyone who has visited the State Capitol Building during the peak of the legislative session can attest to the loud hustle and bustle that takes place, a teeming marketplace of ideas where concerned hawkers sell their ideological wares. On any day, an observer can see elected lawmakers chatting loudly with constituents in the hallways as they walk to and from their offices, people delivering speeches in the spacious Rotunda, media cameras and reporters scurrying up and down the hallways to interview lawmakers and advocates, activists anxiously watching TV screens of legislative proceedings and applauding or booing in response to critical votes, lobbyists waiting by the rope line to deliver key information to legislators as they make their way into the chamber, and smartphones endlessly ringing and buzzing with news of the latest closed-door committee hearing that was scheduled at the last minute.”

Advocates added later in the brief:

Into this criminal statute’s capacious maw falls broad swaths of nondisruptive speech and assembly engaged in by amici—raucous and often heated conversations in the hallways, intermittent clapping or cheers in the Rotunda, crowds of ordinary citizens holding signs or wearing T-shirts with provocative language—none of which actually disrupts any ongoing legislative proceeding occurring behind closed doors. At most, the challenged statute reflects an “‘undifferentiated fear or apprehension of disturbance (which) is not enough to overcome the right to freedom of expression.’”

Williams said in a heartbreaking speech to state legislators the day after her arrest that she was strip-searched and held in Fulton County Jail for more than five hours. “I didn’t yell at anybody. I didn’t say anything to obstruct anyone from doing their job or their business on the floor,” she told her peers. “What I did was I stood with my constituents as they wanted their voices to be heard, and I would hope that each of you would always stand with your constituents because that is what we’re sent here to do.”

Here’s some of state senator @NikemaForSenate Nikema Williams’ floor speech about her arrest in the capitol rotunda yesterday. #gapol

“I did not put it on my to-do list to get arrested yesterday.” pic.twitter.com/n3OaInVpiP

Three years after Williams’ arrest, Capitol police targeted another Black legislator at the state Capitol. Democratic Rep. Park Cannon was detained in the process of trying to watch the governor sign a restrictive voting rights bill rushed through the legislature by Republican lawmakers. Journalist Hannah Joy Gebresilassie posted video of the detainment on Instagram.

“I felt as if time was moving in slow motion,” Cannon said at a news conference following her arrest on March 25. “My experience was painful, both physically and emotionally, but today I stand before you to say that as horrible as that experience was and as difficult as it is to acknowledge that I am facing eight years in prison on unfounded charges, I believe the governor’s signing into law the most comprehensive voter suppression bill in the country is a far more serious crime.”

Fulton County District Attorney Fani Willis told Channel 2 Action News Cannon would not be prosecuted. “After reviewing all of the evidence, I have decided to close this matter,” Willis said in an emailed statement. “It will not be presented to a grand jury for consideration of indictment, and it is now closed.” Charges were similarly dropped against Williams.