Latino artists craft tributes to the lives lost in Uvalde 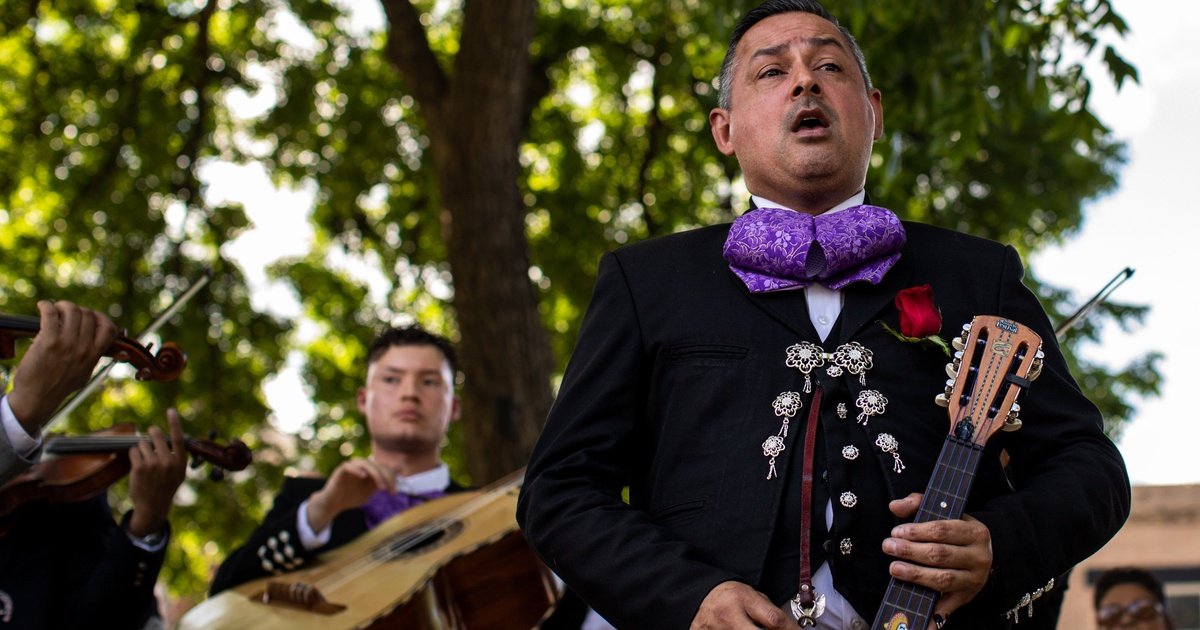 UVALDE — At their heart, corridos are about preserving a story. The traditional songs are meant to usher the present into folklore, capturing the accounts of people, of journeys, and in the case of “El Corrido de Los Angeles de Uvalde,” of tragedy.

The corrido already written for the children who died at Robb Elementary School tells of the day a darkness enveloped the land of trees. Its quatrains capture gunshots ringing out in a quiet neighborhood, and the 90 painful minutes children and their teachers were left waiting.

“Pero no one came to the rescue,” the folk ballad croons.

In music and paint, words and color, artists have already begun seeking ways to render the Uvalde shooting victims eternal — maybe in some way keep a sliver of them earthside — after they’re gone.

The verses of the corrido for the “Angels of Uvalde” made their way to the town square this week when a nearly 50-piece mariachi ensemble from San Antonio arrived to perform songs of mourning. The strums of the violins and plunks of the guitarrones filled the air as Latino musicians and artists begin putting their grief over the events that devastated this predominantly Latino town into art so that it can be remembered, so that people won’t forget.

The mariachis were dressed in a hodgepodge of charro outfits and bows because the musicians belonging to various groups had been brought together in a quick-turn effort to serenade the people of Uvalde. The call to tend to the community through timeless songs reached far enough that mariachis showed up from other predominantly Latino communities like Del Rio and Eagle Pass and even some from the Mexican border town of Piedras Negras, organizers said.

Facing an ever-growing memorial of crosses, they offered a repertoire of rancheras they didn’t need to rehearse because they are so often performed in times of grief.

“We bring music, our soundtrack to life’s events,” said Anthony Medrano, a mariachi violinist of San Antonio who co-organized the musical outing. “In the good times and in the bad times and the worst of times, we are called upon to almost minister in a way.”

The ensemble arrived in a traumatized community trapped in a relentless march of overlapping funeral services and burials for the 19 children and two teachers who died at Robb Elementary. For Mexicans and many Mexican Americans, mariachi music serves as a guide to landmarks of life, from the start of romances through serenatas to celebrations of love at weddings through to the end of life.

But by the end of their short set list — once they had run through the familiar somber tones of “Amor Eterno” and the sweeping choruses of “Un Día a la Vez” — some of the performers accustomed to drawing tears from their audiences were themselves weeping.

Some of the musicians who played in Uvalde are instructors who teach young Mexican American children the art of mariachi, giving them a tool to connect with their culture, often starting at the same ages as the 19 children who died at Robb. Others are educators at elementary schools like Robb where most students are Latinos.

“As a musician, it was an honor to bring comfort and peace to the community,” said Celia Sauceda, an elementary teacher in San Antonio who plays the violin and has been a mariachi since 1996. “As an elementary educator and citizen, it was devastating to take in. I’m heartbroken. I’m scared. I’m angry. Innocent lives were taken too soon. This cannot continue.”

“El Corrido de Los Angeles de Uvalde” remained unplayed as it is yet to be set to music, but its lyrics — penned by San Antonio-based contemporary artist Cruz Ortiz and translated into mostly Spanish by Medrano and his wife — were handed out in the town square, hand-printed out as broadsheet posters with its title set in the graphic, dreamlike painting style for which Ortiz is known.

Medrano will be responsible for creating the accompanying music with Juan Ortiz, the musical director of the Mariachi Campanas de America. They’ve begun sketching out various tempos and the instrumentation. If the story needs to be passed down for generations, Medrano said, it must be humble enough for it to be taken up on a lone guitar.

But they’ll also need a rhythm section to serve as a bed for the song — the accordion works well into this style, Medrano offered — so that portions of it can be recited almost like a poem. Its melody will need to make room for pauses and breaths for the rawness of its words, a staple of corridos, to be absorbed after each devastating punch.

Down the road from the spot where the mariachis performed, local artist Abel Ortiz-Acosta in recent days used a long wooden brush to carefully trace a maroon edging on white block letters that read “UVALDE ES AMOR” and “MUY STRONG” on the windows of the small art gallery he owns.

The painted messages echoed what had become a common theme on glass storefronts around town, but he wanted at least one that was in Spanish, he said.

In the coming months, Ortiz-Acosta hopes to make the messages permanent through a series of murals in honor of those lost at Robb. The art professor has spent the week since the school shooting putting out calls for funds and trying to connect with artists from across the state to participate. Help has already come through community organizations that support artists of color in Austin and Houston.

The first of the Uvalde Strong Unidos 21 Murals may go up on the side of his building if he can get permission from the preservation board that oversees historic districts. Perhaps the murals will capture the faces of the children, though not without first getting the blessing of their families.

Like just about everybody in town, Ortiz-Acosta knows some of the families mourning their lost children. Among his students was the mother of Lexi Rubio, a 10-year-old straight-A student who wanted to be a lawyer. His wife, Evelin, a Zumba and fitness instructor, regularly collaborated with the father of another student, Ellie Garcia, when they worked together on local quinceañeras. Ellie, who would’ve turned 10 on Saturday, was already planning her own dance for her celebration five years away.

A longtime resident of Uvalde, Ortiz-Acosta knows his town will forever be altered. The healing process will be slow because the scar is “going to reopen every time something like this happens,” he said.

But art can serve as a balm. Plus, he said, they don’t want anyone to forget what happened here.

“We want them to be monumental,” Ortiz-Acosta said in Spanish. “Because those lives should’ve been monumental.”