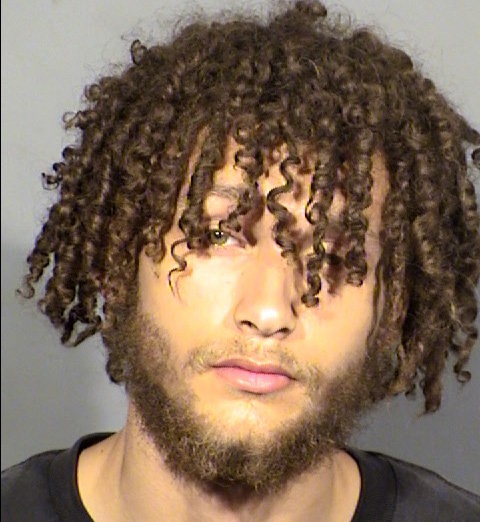 A Las Vegas man was jailed this week on counts of murder after video footage showed him “stalking” victims in at least two fatal shootings nearly two months apart, according to Metro Police.

Alonzo Brown, 18, was arrested and booked Monday at the Clark County Detention Center on three counts of open murder and two counts of carrying a concealed weapon without a permit, Capt. Dori Koren of the homicide division said Thursday.

Police responded May 4 to the 5200 block of East Tropicana Road, near Boulder Highway, after receiving a ShotSpotter alert indicating that six gunshots were fired about 2 a.m., Koren said. Arriving officers located a Hispanic man who had been fatally shot on a bus stop bench.

Nearby surveillance footage showed a person who appeared to be Brown in the area near the time of the shooting, but police were unable to confirm because of the low quality of the video, Koren said.

About 3 a.m. June 23, police received another ShotSpotter alert, this time in the 5300 block of East Tropicana, in which five rounds had been fired, Koren said. Officers nearby heard the gunshots and responded to the scene, and located a Hispanic man suffering from multiple gunshot wounds dead on the sidewalk.

Again, video footage obtained by police appeared to show Brown near the scene at the time of the shooting, but the video was too grainy to pinpoint the suspect, Koren said.

After the June 23 shooting, however, Metro elevated the case status after learning that the suspect for both shootings shared a similar description and that the shell casings recovered from the respective scenes indicated the same handgun was used in both slayings, Koren said.

In response to that revelation, Koren said, police over the last week conducted a large-scale canvassing effort in the southeast valley to collect as much evidence as possible. That included collecting other nearby video surveillance footage, interviewing possible witnesses and conducting surveillance operations, Koren said.

Throughout the course of the investigation, Brown was positively identified as a suspect, and on Monday, was stopped by police, Koren said. Brown led the officers on a footchase but was ultimately taken into custody. Police discovered firearms in his waistband and in his backpack, Koren said.

Brown remains in custody at CCDC as of Thursday evening, according to jail records. He appeared in Las Vegas Justice Court Thursday, where he was formally charged, and he was denied bail at a hearing on Tuesday, according to court records.

Brown has a preliminary hearing scheduled for July 28, according to the court schedule. He’s being represented by a public defender.