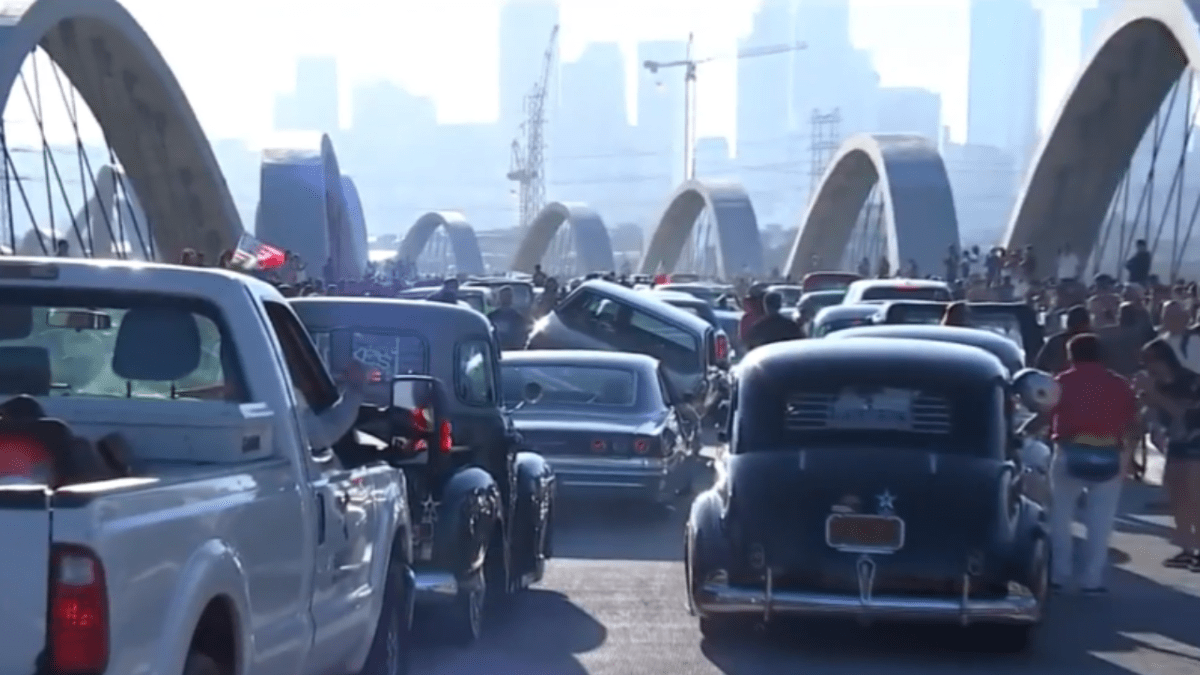 The Sixth Street Viaduct, which will connect Boyle Heights and the downtown Arts District and replace one of the city’s most iconic structures, officially opened Sunday night following the third straight day of community celebrations.

“It is in many ways the embodiment of what Los Angeles strives to be – – a city that connects community, the cultural capital of the world,” Mayor Eric Garcetti told reporters on the bridge Friday morning.

On Sunday from 11 a.m. to 4 p.m., the bridge opened for pedestrians and bicyclists, with no tickets required. At 7 p.m., it officially opened to vehicle traffic.

Festivities began Friday evening with local dignitaries commemorating completion of the roughly $588 million viaduct — the largest bridge project in the city’s history. This included a formal ribbon-cutting ceremony followed by an arch-lighting ceremony.

Saturday’s activities began at 2 p.m. and included live music from Ozomatli, along with food trucks, a vintage car display, fireworks and a bridge-lighting.

The project took years longer than anticipated and the final cost is well above original estimates.

It was funded by the Federal Highway Transportation Administration, Caltrans and the city of Los Angeles and city officials the project included the largest number of women workers of any public works development in the nation.

The previous Sixth Street Viaduct, which was built in 1932, was a Los

But that original structure fell victim to the ravages of time and deterioration blamed on an alkali-silica chemical reaction that caused an expansion and cracking of the concrete over time, leaving the bridge seismically unsound.

Demolition work on the original structure began in 2016, with city officials at the time projecting a 2019 completion for the then-$449 million effort. Within a few months, however, the completion date was pushed back to late 2020, followed by additional construction delays during the ensuing COVID-19-plagued years.

The new viaduct’s “Ribbon of Light” design, with its 20 sweeping arches, was created by the architectural firm HNTB Corp. and Los Angeles-based architect Michael Maltzan.

The city’s Bureau of Engineering plans to create a 12-acre park under the bridge to provide access to the L.A. River, public art, recreational programming and more.

According to the Bureau of Engineering’s plans, the downtown side of the Sixth Street Viaduct park will include a rain garden, planted seating area, a play and performance lawn, a sculpture garden, a meadow, a dog play area, an adult fitness section, cafe and restrooms, a sloped river gateway, an urban forest and terraces.

On the Boyle Heights side, the park’s plans include a skateboard area; a meadow; a picnic area; a synthetic turf soccer field; flexible courts sized for basketball, futsal and volleyball; a play and performance lawn; a children’s play area; a promenade; a landscaped seating area; an adult fitness area; a rain garden; a dog play area and grilling spaces.