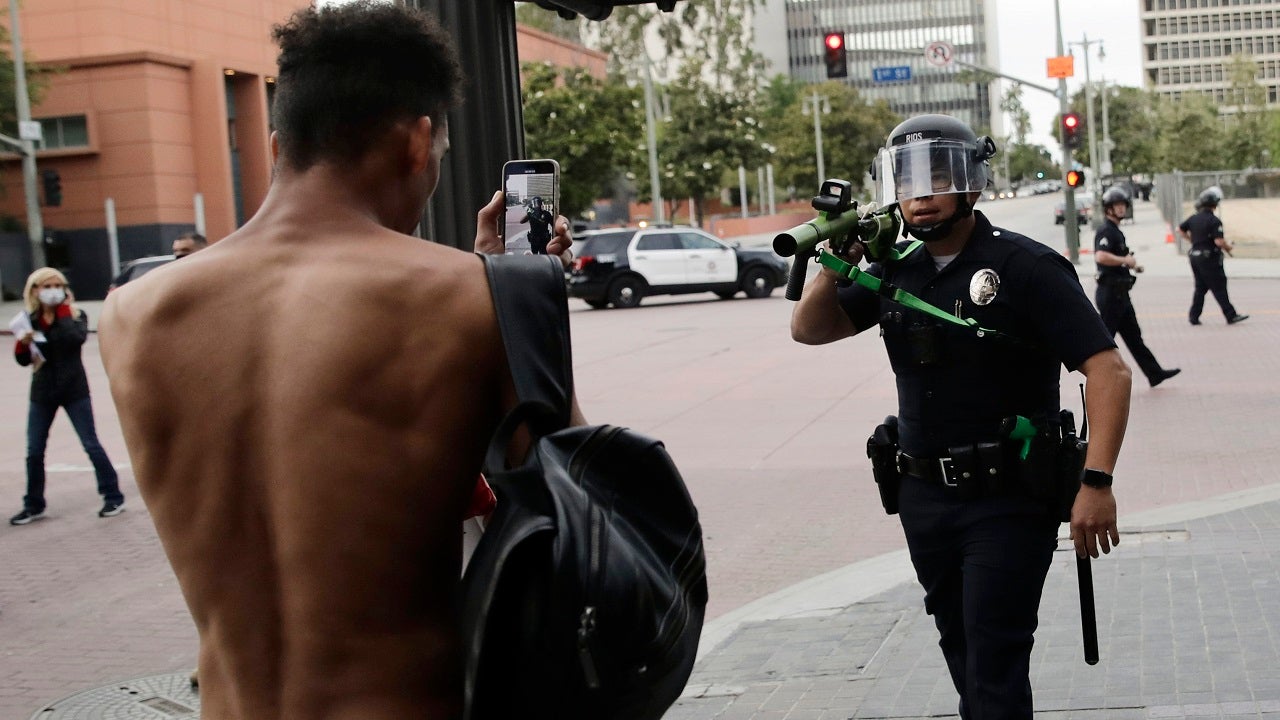 The Los Angeles Police Department’s handling of the 2020 summer protests following George Floyd’s death highlighted the agency’s failure to adequately train officers, antiquated tactics and a “chaos of command system,” among other missteps, according to a recent independent report.

“An Independent Examination of the Los Angeles Police Department – 2020 Protest Response,” which was commissioned by the city council and made public Thursday, excoriated the LAPD for the department’s actions during last summer’s protests, blaming the agency for a litany of missteps made on the city’s streets. It covered “institutional issues” but did not address allegations of misconduct and excessive force against individual officers.

Among the report’s findings were: secret “shadow teams” of undercover officers embedded among protestors, with no effective way to relay their intelligence to police brass; a chaotic command system where top staff didn’t know who was in charge and contradicted each others’ orders; minimal training on the use of hard-foam projectile weapons; poor detention conditions for arrestees amid a pandemic; antiquated tactics, and neglected reforms that had been agreed upon after the mishandling of previous demonstrations over the last two decades.

FILE – In this June 2, 2020, file photo, a police officer aims his less-lethal weapon at a demonstrator during a protest in Los Angeles, over the death of George Floyd on May 25 while in police custody in Minneapolis. (AP Photo/Jae C. Hong, File)

Protests across the city in late May and into June were largely peaceful, but pockets of violence and crime erupted on the city’s streets. Hundreds were injured or accused police of violating their rights during clashes and mass arrests, prompting several lawsuits. Scores of businesses were damaged or looted. More than 106 officers were injured.

“At times, the Department did not, or was not able to, isolate and arrest those criminal elements who were throwing objects, creating violence, or looting due in part to the use of antiquated tactics and lack of training on public order policing,” the report said.

The independent probe was completed by former top brass at the department. Reviews by LAPD staff and the National Police Foundation remain ongoing.

In response to the report’s release, the LAPD said it would provide comment after “carefully” reviewing it. It noted that it had also begun its own internal review and expects another report, this one from the National Police Foundation, to be released later in March.

The LAPD said it has implemented several changes within the department separate from either of the three reports.

FILE – In this June 1, 2020, file photo, a protester raises his arm shortly before being arrested for violating a curfew in the Hollywood area of Los Angeles during demonstrations over the death of George Floyd. (AP Photo/Marcio Jose Sanchez, File)

“Although the Chief of Police has taken responsibility for the Department’s response over the summer, we have also identified lessons learned from the civil unrest,” the department said. “As a result, additional training was provided to the rank and file, as well as the command staff and leadership of the Department. The opportunity to learn from our mistakes, to grow, and become better servants to our community is welcomed, and we look forward to leaning into the challenges before us.”

Following the summer months of unrest, the department provided crowd management and crowd control training to nearly 4,200 members and more than 7,500 officers have undergone command and control training, the LAPD said.

The LAPD had entered into several multi-million-dollar legal settlement agreements after confrontations with protesters over the last 20 years, dating back to the 2000 Democratic National Convention. The department agreed to the reforms, but the report found that police officials had not kept up with them for several years and some of the same issues surfaced during the summer’s civil unrest.

“It is unfortunate that the same issues have arisen again and again, with the department being unable or unwilling to rectify the problem,” the report said.

The report specifically faulted the department for failing to train officers adequately in the use of hard-foam projectile weapons, as well as placing commanders on the streets although they did not have recent crowd-control instruction. Mass arrests of protesters without a clear plan left demonstrators detained for hours, even as some were only held on citations and should never have been held for that long, according to the report.

Additionally, the department’s deployment of skirmish lines was “useless” in controlling small groups of violent agitators with peaceful protestors who were shouting with their hands up in a non-threatening manner, the report said.

The report’s recommendations included new training for both rank-and-file officers and command staff and audits of the department’s compliance with previous settlement agreements, as well as a study of the agency’s less-lethal munitions and their use.

The Los Angeles Police Protective League, the union that represents rank-and-file officers, said the independent report reflected some of the same concerns officers voiced months ago: under-staffing, a lack of a strong command structure, no clear mission.

“The level of violence, looting, and arson that overwhelmed portions of Los Angeles would have been difficult to predict, but once it was clear that elements within the peaceful protests were intent on destruction, then our members should have been provided the necessary support and resources to address the violence and keep them safe,” the board of directors said in a statement.

Unrest in the city, as well as other parts of the nation, has simmered in recent months, but has flared up on occasion.

The LAPD arrested 11 people after a protest late Saturday to mark one year since Breonna Taylor’s death in Louisville, Kentucky.

As many as 200 people gathered peacefully on Saturday for a march near the Hollywood Walk of Fame, but videos from the scene show the protest descended into violence.

One video showed two protesters pounding on the hood of an occupied police car and the driver accelerated, sending them to the ground. Other videos showed broken storefront windows and officers in riot gear being struck with what appeared to be a microwave or air conditioner.

Police Chief Michel Moore said smoke grenades and other projectiles were thrown at officers and nine businesses in the area were vandalized. Three police officers were hurt.

“No justification/excuse for this violence,” the chief tweeted on Sunday. He said the officers did not suffer serious injuries.